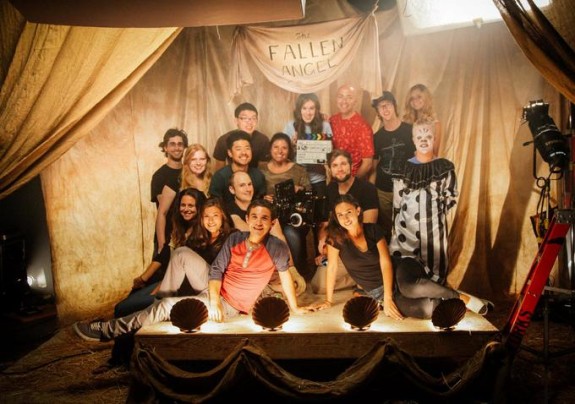 Guest blogger Paula Bernstein is the Filmmaker Toolkit and Technology Editor at Indiewire. She covers the intersection of entertainment and technology, including transmedia, social media, crowdfunding, new distribution platforms, digital filmmaking and other filmmaking tools. Over the course of her career as a journalist, Paula has written about film, television, technology and advertising for Fast Company, Filmmaker Magazine, TV Guide, The New York Times, Adweek and many other digital and print publications. The following post originally appeared on Indiewire.

Soon after the teaser trailer for the fourth season of “American Horror Story: Freak Show” was uploaded to YouTube earlier this week, it went viral. In addition to the hundreds of thousands of hits on YouTube, the creepy 21-second clip was circulated by news outlets around the world. That’s not, in itself, surprising given the crazy popularity of the FX anthology series created by Ryan Murphy, but here’s the catch: the trailer was fan-made.

Not surprisingly, Fox had the video taken down from YouTube due to a copyright claim. But never fear, we’ve got the video for you (below), as well as the back story about how the video was made.

Indiewire e-mailed with the video’s creator, Kellen Moore, who explained how he got the idea for the video and how it went crazy viral. 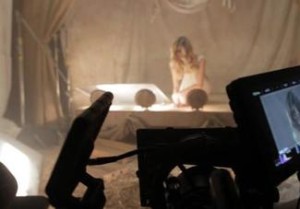 What prompted you to make the video?

I graduated Chapman University in 2012, and since graduating it’s been a challenge trying to get my footing in this industry. I have a close group of friends that collaborate with frequently—my producer, Andrew Ducote, and Cinematographer, Jonathan Bruno. We’ve had the opportunity to shoot commercials for some major brands such as M&Ms and Burger King.

I am a big “American Horror Story” fan. I have a lot of respect for that show, but more specific to the promo we did, I’ve been a tremendous fan of the show’s marketing. I’ve followed Ryan Murphy’s promo work for his shows dating back to “Nip/Tuck.” His work was an inspirational guide through film school, so when my friends and I wanted to do something creative for ourselves, I suggested we go after a dream—do a promo for season four of “American Horror Story.” My professors always said, “if you want to create, create, and if you want to direct, direct”…even though the promo was unofficial, it was a total blast having the opportunity to put my stamp on a brand and television show I love and respect.

How long did it take you to make?

I started production on the spot as early as March. I knew I wanted the promo to really be something special, so my producer and I made it point to give it all the detail and attention any production company would. We had animatics made of the promo before we shot it to help recruit some of our teammates—as it was a very low budget passion project we wanted to show the series intent behind the spot.

How did you get it out into the world?

We just uploaded it onto a YouTube page we made and shared it on Tumblr and Twitter using the proper hashtags…the internet embraced the spot and it naturally just did its thing. It was pretty remarkable to watch.

Were you surprised that people thought it was the official teaser from FX?

Yes and no. We put a lot of love and attention to detail into the spot. We wanted to follow the quality that FX puts into their work, our goal was for people to embrace our work and not feel like it wasn’t up to the standards that “American Horror Story” has set.

What’s your background? Are you a filmmaker or just a fan?

I’m a filmmaker. I’m 26 years old and the majority of my team are all recent college grads. We went to film school together and loved collaborating together. But I am also an avid fan—so a bit of both!

What advice would you have for creators who want their video content to go viral?

Love what you do and do solid work. All we wanted to do was pursue a personal dream and we had a blast while we did it. I think the internet noticed that and embraced it. I’m very grateful to have had such an audience with this—even though it’s unofficial, reading the responses has made it feel very official. My team and I are incredibly grateful.

Watch Moore’s promo (now on Vimeo) below and check out his website.