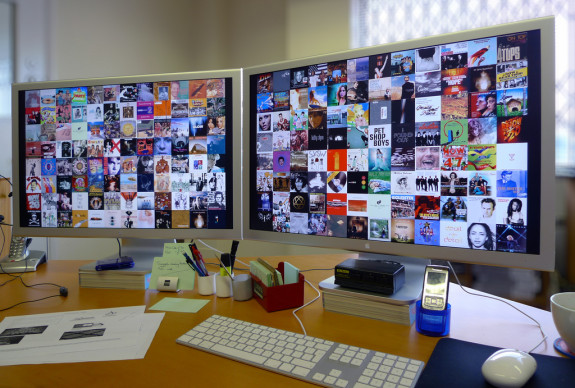 Look, that’s your album. Over there. On that person’s computer screen. Courtesy of Brett Jordan.

I just released my first digital single (looky, looky! buy buy buy!) and I am very excited. I am so waiting for all that sweet cash to roll in. (Yeah, mostly still waiting.)

I had never released a song online until just recently. This was a huge mental hurdle for me; I had no idea how to get it done. Since I figured I couldn’t be the only one wandering through the foggy land of confusion, I wanted to share what I learned.

As you’ll notice, both my first and second albums, which exist in physical CD format, also exist on the internet (hence the links). This is because the people who made my CDs have magical powers. Not only do they poke tiny holes in plastic discs that make noise when placed in the correct receptacles, they can also change the pixels—change the internet—by merely thinking their thoughts.

Some places take a cut of your sales when you make them. Others charge an annual fee.

At least, I think that’s how they do it.

Lacking this kind of magical prowess, I had a few questions: What if I wanted to go the Pomplamoose route, and not press any discs? Pomplamoose (a band I love for both their music and their business model) has never pressed a disc.

So, how did they do this? They probably used a service like this. I resisted the idea of using a service like this for a long time, being the cheap-o (er, not cheap-o, frugal-o!) that I am. I was willing to do a little extra work to avoid extra costs! Sadly, I learned that a company like iTunes won’t even talk to you about selling your music unless you’ve got 20 albums or more in your repertoire, and even then they make no promises to sell your music. But lucky for us, a bunch of companies have worked out secret, perhaps dark deals with companies like iTunes, so we indies have an in! Seems like we gotta go with the middleman on this one.

Obviously, these middlemen are going to charge you money. Which one will get you the best deal? Ari will tell you. This seems to be the general pattern: Some places take a cut of your sales when you make them. Other places charge an annual fee. Depending on the volume of music you’re selling, one or the other might be a better deal for you. The not-annual-fee variety is definitely the better deal for me, cause at this point I ain’t selling much.

Alternatively, if you didn’t feel like your songs had to be on evvvvery single damn online music platform (although someone like Ari Herstand would say you should) for whatever reason, you could just simply upload your tunes to a site like Bandcamp for no money down at all. This is what Jonathan Mann does. He’s got a really interesting process: He writes a song a day and posts it to YouTube. Seems he uploads every single song to Bandcamp but saves digital distribution for his full albums and EPs.

Musicians like Ari Herstand and Pomplamoose, who, you know, don’t have as giant a raft of music to be selling, seem to have all of their songs available on all platforms. But if you don’t feel like you need your shit on iTunes (like, if it would be prohibitively expensive to pay for digital distribution for each and every one of your 365 songs a year) then don’t. That’s the cool thing about this career. Do what makes sense; you don’t have to waste your time on things that seem like a waste of time. Yay!

If you’re only interested in releasing original songs, you can stop reading here. But if you wanna do covers, you’re not done yet. Next time we’ll talk licensing.