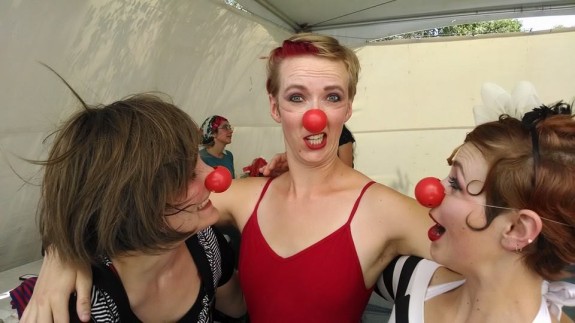 Me and my new circus pals, Callie and Tasha.

I wanted to do real things with my real muscles, so I signed up for a circus intensive. Besides, I didn’t have any shows booked (I was tired of the pixels, remember?) so what else was I gonna do with myself? It was perfect timing.

What can I say about it? It was so much fun. It was beyond liberating to do something so new, so exciting, so beyond my brain’s normal functioning patterns. It was a six-week intensive with classes in all sorts of disciplines: aerials (fabrics and trapeze), clowning, physical theater, stilts, acrobalance.

This is really refreshing. I’m loving being a beginner.

There’s this thing that happens when you’re taking a fabrics class, for example, and you’re a beginner. The teacher shows you how to do something (and usually they show you about three different things you can do once you’re all twisted up in there), and you go, “Oh, cool, okay, I could totally swing that, that looks super do-able,” then you get up there, you reach for the apparatus, and you’re like, “…uhh…”

You have no idea what to do, and feel totally lost.

This is really refreshing. I’m loving being a beginner. Not to say that I don’t feel like a beginner at music in a lot of ways—I totally do!–but it’s so exciting being at the very start (like, three months and counting!) of this aerial thing. What’s exciting about being at the very beginning is seeing your own progress. Because during one class you’re hanging upside-down, inexplicably not knowing which way is up (note to self: the ceiling is up), and the next you’ve totally got it: What seemed like an interminably long sequence of impossibly complicated tasks has somehow solidified. Understanding has come to the fore from a dark, foggy netherworld of confusion.

And when that happens, it is beautiful. It looks like this, but in your mind. 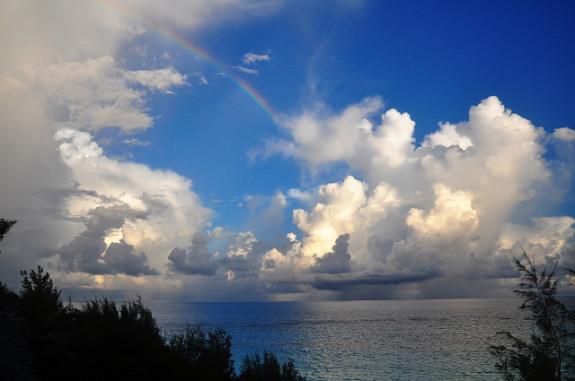 I’ve got circus muscles now. I have upper body strength, which is something that I’ve never had any reason to develop before. Flashback to Sage’s early teens: At a summer dance intensive I attended, a yoga instructor referred to all us ballerinas as having “weak little dancer arms.” So, that’s been the image of my upper body strength I’ve carried for all these years. Until now.

Surrounded by wonderful women at this wonderful studio (by the way, I am totally going to keep taking classes up there—the atmosphere is just so dang warm and supportive), I’ve become stronger, more confident, and totally jazzed to keep learning the aerial arts.

The workshop concluded with a series of performances. I performed in a clown act (hence, the nose you see in the above photo) and a trapeze act. And, ironically enough, we choreographed our trapeze act to this steampunk song about the evils of the man who invented digital clocks. (It’s ironic because I didn’t choose the song—my trapeze partner did. Remember how I said I was tired of the pixels?)

And now I feel like a strong, tricked-out trapeze badass.

I took a fabrics class the other night and climbed all the way to the fuckin’ top—although I think it was maybe a little shorter than the ones I’ve become accustomed to climbing—I MEAN, it was the longest fabric ever and I just feel so confident, strong, and totally refreshed.

I’m so excited to keep going with this.