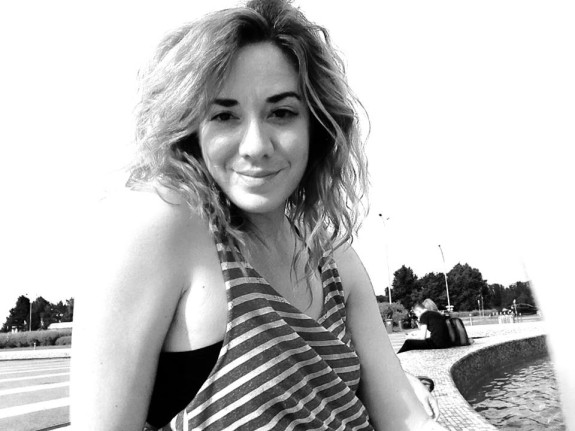 Hannah at a fountain in Warsaw, Poland. Courtesy of Hannah Kauffmann.

I first met the lovely Hannah Kauffmann a few years ago when I played my ukulele in my first Reptilian Lounge, which is an almost inexplicably strange and exciting variety show that Albuquerque’s own Tricklock Company has been putting on for the last 15 years. I’ve done many Lounges since, and have always had SO MUCH FUN. It’s seriously one of my favorite shows to play in Albuquerque.

I’m so excited that the Lounge will be back tomorrow at the opening ceremonies for 24 Hours of Art. In anticipation of this performance, I just had to ask Hannah some Burning Questions about Tricklock, their recent tour in Poland, and how the heck one would put on a cabaret in a brewery.

I remember seeing the Lounge when I was 18 and thinking that it was either the coolest or weirdest thing I had ever seen.

Hannah Kauffmann: Any space is a performance venue! Alternative venues always present with a certain number of challenges—lighting, backstage space, etc., but the beauty of a show like the Reptilian Lounge, or really any of Tricklock’s shows, is that we believe that a traditional THEATRICAL PRESENTATIONAL ATMOSPHERE is never a requirement. So for something like this, we’ll meet with the organizers of an event, check out the space, ask some questions about power, and make decisions from there.

Last night, we met with the Humbird guys, who were spectacular as always, used that as an excuse to drink a beer at Tractor Wells Park, decided which lights we would bring, and we’re going from there! In Wells Park, for instance, we’ll bring in some simple front lights that will help direct focus, we’ll adapt the trademark Page Sister undressing routine (a staple of the Reptilian Lounge) to something that can be done without a dressing room, we’ll bring in someone to sell change inside instead of at the door (loose change and audience participation is required at every Reptilian Lounge)—little changes. If a show tells a good story and is well presented, it can be done without any bells or whistles.

Oh, I’m so glad to hear that! I remember seeing the Lounge when I was 18 and just meeting Tricklock and thinking that it was either the coolest or weirdest thing I had ever seen and that I couldn’t wait to be a part of it. Look where that got me.

I felt the same way when I first saw the Lounge! It was just so strange and interesting. And lovely, in the weirdest possible way.

The Reptilian Lounge is billed as a cabaret/variety show, but that’s really only the half of it. There are hosts, usually two, though I think we’re going to try a rotating three-person this weekend, a girl you can throw your change at, two sassy folks who boss you around in between acts, a raffle, an occasional onstage haircut or beard shave—really, anything can happen there.

The Lounge has an extraordinarily generous and joyful audience, focused on support and celebration (and delicious Tractor Beer). We’ve been host to performers from Jamie Kilstein, Idris Goodwin, John Fugelsang, Buddy Wakefield, to hacks like me. And if even I can leave there happy after a set, I think we’re doing something right.

The Lounge has remained mainly the same for fifteen years. We’ve had some changes in the cast of characters—for a long time, people tended to play one role, Host, Target Girl, Page Sister, etc., and stick to that for a long time. Now, we tend to have a rotating cast. It’s not unusual, in a three week run of the Lounge, to host one weekend, Page Sister the next, and work the box office the third.

Next! Tricklock just toured Poland with a show called Finger Mouth. Congrats! You’ve written a fabulous blog post or two about the experience, which you’ve been ever so nice to allow us to repost here at Pyragraph. I remember seeing on Tricklock’s website that you were able to do that with a grant. Where did it come from? How did you get it? What was the application process like? How excited were you about it when you received it?

We sure did! We received a grant from the Trust for Mutual Understanding for a two-part trip to Poland. The application process is fairly straightforward—questions about your project, a narrative, a proposed budget, and some well-worded pleading. We wrote the grant, I think, in fall of 2013, found out we received it in May, and left the country on July 14th. Once we found out we were going, it happened pretty quickly.

Our grant was written for two projects. The first was a four-city tour of Finger Mouth, a Tricklock show that premiered in Fall 2012. Finger Mouth is a show performed in a combination of shadow puppetry and live action (meaning, you know, we had a lot more stuff to carry around than if we were doing a straight play). The shadow puppetry techniques we use in the show we actually learned in Poland, on our 2011 tour of Lullabies for my Father, so it was really great to get to take them back and show our teachers what we had learned.

The second part of our tour was research based. Tricklock has recently begun work on an admittedly incredibly ambitious new project focused on the lives of Roma people around the globe, particularly Roma women. It’s a three country collaboration, directed by my Co-Artistic Director Juli Hendren with Elsa Menendez as a dramaturg, and featuring myself, Dagmara Zabska of Teatr Figur Krakow in Poland and Madeline Sienna of La Piara in Mexico City. This first leg of research included spending time with Dagmara in Roma villages near Lanckorona (a small mountain town south of Krakow), talking to Roma artists, pastors, teenagers, and petting Polish dogs.

It was an absolutely incredible experience. We’re working on securing funding right now to conduct the same kind of research trip to Mexico City, and then to bring Daga and Madeline here to Albuquerque to build and premiere the piece, which will hopefully happen in late 2015.

Ha! It does seem an unusual place to have such regular collaboration, but Tricklock has a long history there. The original company trained at the world-renowned Gardzienice Academy in Poland (yes, I had to look up the spelling of that), and we’ve been visiting ever since. Foundations like the Trust for Mutual Understanding place an emphasis on collaboration with Eastern Europe, and we love, love love visiting there. For a few years now we’ve been on a great rotating schedule—go over to tour a show, take a workshop or do some research, come home, build a show based in that workshop or research, take that show on tour, take a workshop or do some research—it’s a great cycle.

Can you tell me a little about how Tricklock first got connected to the Poland theater scene? Is the Tricklock Revolutions fest connected in some way?

I think 24 Hours of Art is a wonderful way to bring the community together to celebrate all of the incredible art that exists in our city.

Oh goodness, long story very truncated, Tricklock connected to Poland when the company went to train at Gardzienice about fifteen years ago. That year, Tricklock brought the Gardzienice company out to perform in Albuquerque during the second weekend of January, brought out another company to perform the last weekend of January, threw a Tricklock show into the middle weekend and called it a festival. That was the first Revolutions.

Clearly, the festival has grown since then, and so have our Polish relationships. We have close ties to Teatr Figur Krakow, beginning all the way back at Gardzienice Academy, where Dagmara was in training alongside Juli. We often bring them out to Revolutions—if you saw Artistic Handicraft, that’s their work. Incredibly innovative and striking.

What’s your title/role with Tricklock? You said you’ve been working with them since the age of 18? How has your role in the company grown and changed over the years?

My long and fancy title is Co-Artistic Director of Tricklock Company and Co-Curator/Producer of the Revolutions Festival. I met Tricklock when I was 18, my first year in college at UNM. I remember seeing Billy the Kid for the first time and thinking that I just had never known that’s what theatre could look like. I was hooked immediately. I started volunteering for the company whenever I could, sweeping change at the Lounge, selling T-Shirts during the festival, training with them whenever I was invited. I joined them onstage in Candide when I was still in college and in Cymbeline after I graduated, and was asked to join the company shortly thereafter. I think that was 2009? After a few years, I was voted into the Artistic Core of the company, and last July I was asked to become Artistic Director. I share the title with Juli Hendren, who is the lead curator of Revolutions.

And, last but not least, is there anything you find special about 24 Hours of Art?

I AM SO EXCITED FOR 24 HOURS OF ART! I think it’s such a fantastic idea and a wonderful way to bring the community together to celebrate all of the incredible art, in every form, that exists in our city. I can’t think of a better group of people to be producing it—it’s already so well executed and the buzz is huge! We’re so flattered to be invited to be a part of it.

24 Hours of Art is happening this Friday and Saturday, August 15 and 16 at three different locations.