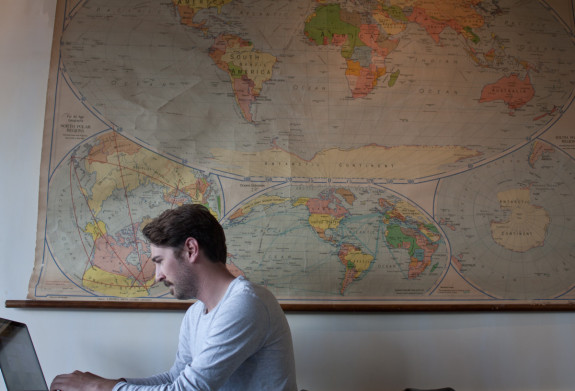 Taking over the world, one email at a time.

To help you keep all those moving parts properly lubed, find yourself a team of co-conspirators, those pedestal-people in your town with as much shrewdness as idealism. Then get them drunk, tell them you want their help planning an arts festival, and get them to sign an agreement before they sober up or fall asleep.

Once you’ve got a team, get a bigger team.

Myself, Kyle Ruggles and Jeremy Kinter of Humbird NM had an idea for an arts festival for Albuquerque. We brought on Skye Devore of Tractor Brewing Co., Carlos Contreras of ImmaStar Productions, Peri Pakroo of Pyragraph, Tami Abts of A Good Sign and Natalia Livingston, the lone gunwoman.

Once we had these people, 24 Hours of Art became feasible. I think everyone realized that 24 Hours of Art was a festival that needed to happen because of its stance about what it is: a festival dedicated to Albuquerque’s rich company of artists; nothing else. Our concept may be a little vague, but we wanted our festival to be a counterpoint to all the festivals that sell booths to artists to be “fringe” and performers are on the sidelines. We thought it was overdue to give a festival directly to the artists. Oh yeah, and we decided to make it 24 hours long, no breaks.

My next piece of advice: Once you’ve got a team, get a bigger team. We brought on reputable local professionals to fill the holes in our figurative merry-go-round. Harwood Art Center and Burque.org were delegated to create and staff the community art project that will enable the general public to make art alongside professionals. Tricklock Theatre Co. was enlisted to curate the opening ceremonies of the 24 hours with in-the-round performance. And the 48-Hour Film Project was reeled in in order to give our overnight film lock-in the local filmic flavor it so desperately needed.

Truth be told, all these passionate people and groups made it very easy to create an event that felt complete. What was hard was fitting all their logos on the posters. 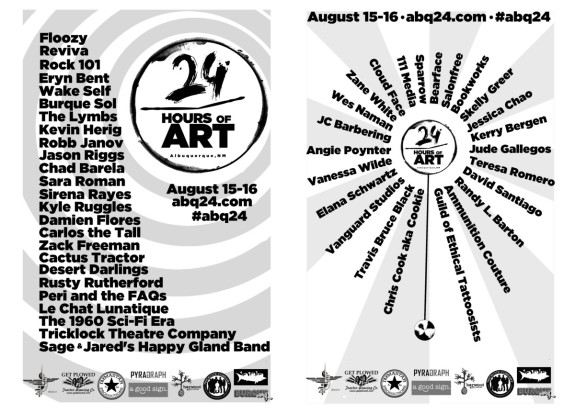 The next step is getting your permits. Here’s my advice.

Oh, advice on permits? Okay. Since you won’t stop asking here’s what I can offer. Getting permits is sort of like playing the games at the carnival: It sounds so easy, and just when you think you’re in reach of that giant stuffed walrus, suddenly there appears yet another clown face whose balloon you must fill with your squirt gun. Albuquerque’s permitting landscape is especially difficult and inane politics adds an even more crazy-making layer. My only permitting advice for you is to do it early in the festival process, say a lot of thank yous, and have a budget for a lot of tanks of gas. Thank you very much, Carlos, for doing that.

Be creative, too. To market the fuck out of ourselves, we’ve implemented a cross-promotional social media campaign, an art auction, and we’ve even taped our handbills to the backs of the general public, “Kick Me” style. Plug plug plug. Brand brand brand. “Say 24 Hours of Art 10 times fast.” Get in the newspapers, do the local TV spots. Never shut up about your festival until it’s over. Then start talking about next year’s.

Then, you gather. You gather artists, performers, aerialists, volunteers, food vendors, car shows and materials. This is the fun part. This is where you get to open dialogues with the people who will make your event an event. This is where you really feel that your reasons for creating an arts festival are valid—where you suddenly understand how important it is that we come together to enrich our community.

It’s no easy feat, by any means, to take on something this gigantic. But what makes it all worth it is the understanding that what you’re doing has a gargantuan effect on the livelihoods of not only the artists who stand to gain from the experience, but on the opinions and inspiration of the people who will come to witness the spectacle. Art is the foundation of everything that makes a community innovative and viable. I’m entirely proud of myself and everyone who came together to bring something of such immense importance to our creative city.

How to throw an arts festival, really: Have the gumption, the wherewithal, the passion, the resourcefulness, the daredevilry, the downright lunacy, and the bravery. Also, don’t have the expectation of getting much sleep.

24 Hours of Art will take place in Albuquerque from August 15 at 6pm to August 16 at 10pm, moving between Tractor Brewing Wells Park, Tortuga Art Gallery, and The ABQ Rail Yards.