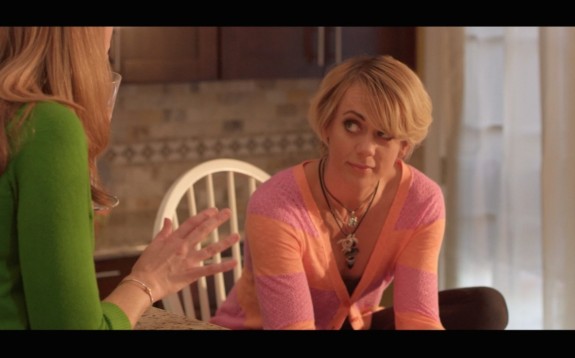 I’d like to think that my 23 years of vegan status got me the role, but I had to audition like any actor would for any indie film. The casting breakdown went out like this:

“Lead, DARCY: Caucasian, Late 20s, The cool girl. Stylish, fit and confident. She stands out in a crowd. Open to tattoos, piercings and awesome hair. Vegan chick—but nowhere near a cliche. She has strong opinions and doesn’t care who hears them. She loves her mom and sister, but sees them as uninformed. She embraces change in every aspect of her life. Perhaps Kristen Ritter type, but open to options.”

I submitted and was called in, fortunately. Directors Liz Lyttle and Deanna Dylan Scott and I were familiar with the others’ work in the vegan community—but that wasn’t going to land me this spot alone. They wanted the best actor. Well…I booked it.

The Pampleteer’s tactic was to nail a Kickstarter campaign to fund the first scene.

It’s always a pleasure to work on a set where production is health-savvy or better yet, full-on vegan, like myself. There tends to be a respect and open-mindedness in all avenues and c’mon, who doesn’t like eating lunch with the rest of the crew for once? But when the actual content of the film being produced is built around the ethics I support in everyday life, the passion I have for the project runs even deeper.

There are plenty of consciousness-raising documentaries out there, and some fantastic ones at that (don’t miss Lion Ark and Forks Over Knives). I meet and work with fellow vegans on almost every set I’m employed on nowadays, like Rob Zombie, Ellen Degeneres, Russell Brand and the independent names Gene Blalock, Nathan Barnatt and Stephen Wozniak.

But it is still rare to get to play a vegan character or deliver lines on-camera on the subject like I did in the groundbreaking scripted film Bold Native, about an Animal Liberation Front activist running from terrorism charges or recording the voice of Green Girl in the sour episode “Rawman and Green Girl,” the family-friendly animated raw vegan superhero series. I wanted to play DARCY in The Pamphleteer desperately, to tell the truth. It had the makings of an important film to me.

As innovative as films with an activist purpose are, their niche audience status provides benefits and challenges to producers. I asked co-directors Liz and Deanna what their formula for producing an independent niche film and they confessed that they knew they had a built-in audience within the animal-welfare community. But they wanted to keep the investing sources private and small, if need be, so as not to risk watering down the scripted message. So funding becomes a more precise endeavor.

The Pampleteer’s tactic was to nail a Kickstarter campaign to fund the first scene, which they could distribute independently and/or use as a teaser to secure more funding to film another scene. Or shoot the entire film.

It worked! The Pamphleteer Kickstarter campaign got funded and the first teaser scene we shot is called “Harmony Drive” and features an older sister that continuously debates DARCY’s new vegan lifestyle as part of their natural sibling rivalry. It happens to all of us who stand for something at some point: our family or loved ones may lend little support to our new thinking and behavior. And we feel like we are defending ourselves to just convince them we are okay.

Or better than okay. Fantastic, actually.

Enjoy the first scene, Harmony Drive, from the feature film The Pamphleteer. Hopefully I nailed that original character description and brought DARCY to life! 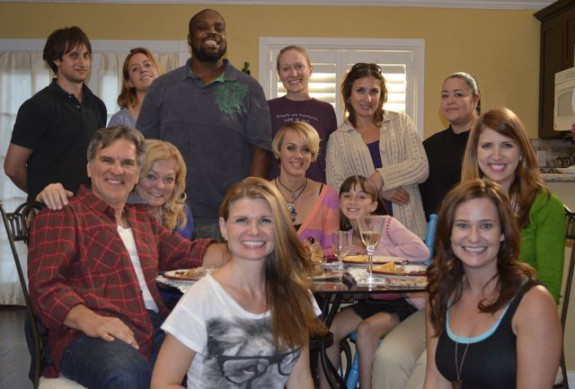 Cast and crew of the “Harmony Drive” scene from the feature film The Pamphleteer.