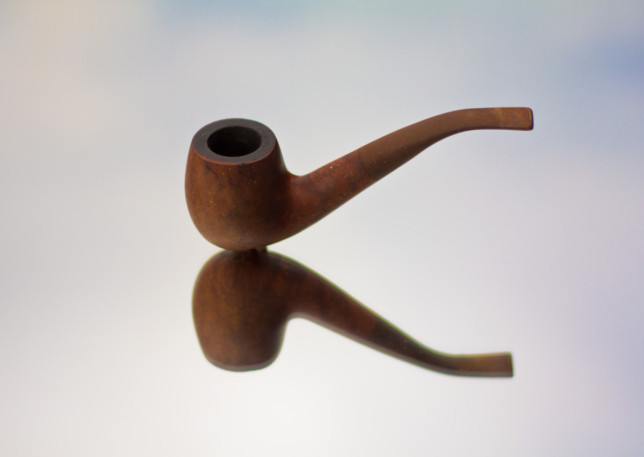 His wife, Judy, greeted me at the door. “Laurence is down in the studio,” she said, for the how-manyenth time. Due to her nonchalance, her kind quickness-to-business, I got the impression that Laurence had hosted many others before me, as if it were a weekly pleasure of his to provide wisdom to the starry-eyed wannabes he meets here and there.

“Down” meant down a two-step staircase branching left from the foyer. Upon descending that second step, the famous artist’s familiar voice greeted me. He and I had, by this point, established a good rapport. You see, I served him fajitas once a week at the restaurant I moonlit at, and the rapport one has with the person who serves him fajitas is just short of the relationship between client and barber. We were chummy.

“Do you smoke?” he asked with quick recognition.

Yes I do, but I was out of cigarettes. He pointed to a cabinet and told me to grab a pipe. The cabinet had upwards of 100 pipes strewn within, and I romantically sifted through them until I found a plain and unassuming one. Laurence was already smoking. A dinner plate hosted five pipes, one of which was smoldering. Upon my speculation, Laurence explained that he smoked five pipes on rotation because he smoked constantly, and after about an hour, a pipe became too hot, so he moved on to the next.

Laurence inquired as to the sketchiness of the man, which was quite, even for the son of a tailor.

At the time, Laurence was 84 years old. He was humbled to moving about with a walker, which obviously perturbed him. And yet, his studio was as busy as ever. He was repainting an older canvas. Why? “Why not?” he said, and I was reminded of the adage “A poem is never finished, but simply abandoned.” Such was the appearance of his work ethic—he had no chagrin about subjecting an old painting to the ever-changing, ever-evolving deftness of his hand.

It should be mentioned that Laurence was very aware of himself. He listened taciturnly to each and every of my experiences, which I related with the inflection of a starry-eyed wannabe soliciting advice, but he never broached a direct response. Instead, he preferred responding allegorically, which was quite welcome and nostalgic underneath the sweet pipe-smoke cloud.

The most wonderful little parable he provided is my reason for sharing this experience with you. While the bulk of the conversation we had is now a little too distant to be able to relate, this little ditty remains very clear.

During his budding career in Maine, Laurence was offered to give a lecture, one that would pay twenty or so bucks (this was the fifties). He was sort of caught-22 at the time, in regards to his career: recognizably talented enough to give a small lecture on watercolor painting, but still starving enough that twenty or so bucks was something to be taken very seriously. “I didn’t want to look like an artist,” he said. He wanted to look serious and professional; he needed a suit. A four-dollar suit was out of the question, for he didn’t have the money. Luckily, he was a friend of a tailor’s son, and was able to convince the guy to give him a suit in exchange for one of his paintings, something he did often. He traded the painting, got the suit, did the lecture, got the twenty or so bucks.

More than ten years later, after Laurence had seen plenty of success, and was in Boston for his solo-show gallery exhibit, he was sitting outside a café with some friends when he sees the tailor’s son walking across the street. Laurence shouted his name, was heard, but was ignored. So Laurence ran over to meet him.

The tailor’s son, hiding something under his arm, was very nervous to see Laurence. He apologized at once for being in Boston, saying he didn’t intend to see Laurence. Laurence inquired as to the sketchiness of the man, which was quite, even for the son of a tailor. The man revealed the something from under his arm. It was the old painting that Laurence had bartered for the suit; the tailor’s son was seeking to have it appraised, with the hopes of finding it was worth enough to sell for a good lump.

Laurence laughed heartily, which eased the man’s deep shame. Laurence told the man not to be embarrassed. Rather, it was perfect that he should be in Boston right now with that painting. It was that painting that he did for a suit, which allowed him to give the lecture, which earned him twenty or so bucks, which bought him more watercolor paper, which he made more paintings with, which opened up so many avenues, some successes, some failures, and one that brought him to have a one-man show at a prominent gallery in Boston. He said to the tailor’s son, “That painting is yours, you can do whatever you want with it. Who knows what could happen?”

I hold this story dearly and reflect on it often, particularly during the moments when the modicums of success I achieve look slightly smaller than usual.

I may have mistyped earlier when I said that Laurence was starving. He wasn’t starving; he was hungry. An opportunity is something that gets you through to the next opportunity. A meal is something that holds you over until the next meal. This is survival. This is art. Forget this, and you will fade, rather than going out in, say, a puff of smoke. 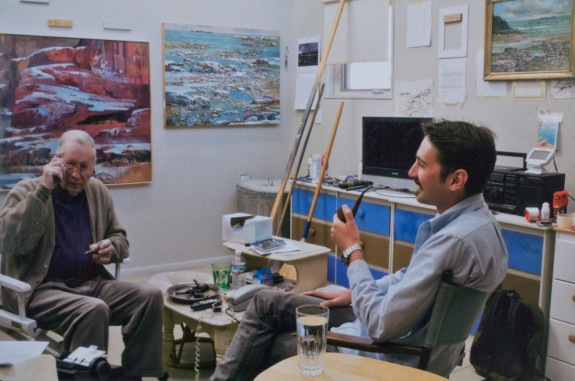