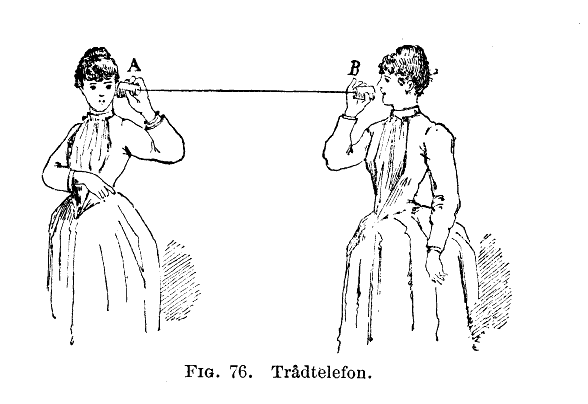 When interviews were easy. Courtesy of Wikipedia.

I’m at the point in my career that I’m fortunate to have various media outlets contact me every now and then (say, every couple months or so) to be quoted in an article or even the subject of an interview. Great, right? Well, yes—mostly. An unwelcome aspect of this is that I have learned how my message can get mangled, sometimes in really unexpected ways. Here are just a few ways a media interview can go south.

1. The interviewer/writer/editor shanks it. You hear this all the time from celebrities and famous people: “I was misquoted.” Or, “My quotes were taken out of context.” Well it turns out that this happens to plebians like you and me—probably even more often.

It didn’t take me too many interviews to learn that “journalists” and reporters tend to be pretty loose with rephrasing quotes. There have been several times I’ve read “quotes” of things I said that were almost completely fabricated and not accurately based on any actual words I had said. (Or, as described below, words that I wrote many years ago were inserted into my “interview.”) I’m not quibbling about meaningless edits; I’m talking about distorting my meaning entirely or getting facts plain wrong.

I did zero prep, mental or otherwise, thinking that winging it would be easy.

Sometimes a writer will get wrong even the most basic things like your name or title. One feature piece called me a “lifestyle consultant,” which drove me crazy. I’m so not that. (Not to mention, I had given her my preferred title.) Other facts were wrong too, like that I had been self-employed for more than 20 years (actually it was 11) and that I had started several companies (actually it was only one, my little freelance media development biz).

Listen, I thank my lucky stars that reporters call me at all. I realize I may sound ingrateful and/or pompous and/or whiny by complaining about getting media coverage. But when reporters or editors get it so very wrong, there’s really no excuse. I’ve been a writer for years and I think I’m realistic about where to set the bar. Basic accuracy is really not that hard.

2. You shank it. About two weeks ago I shanked it. I got an email from a freelancer doing a piece for the trade magazine for car wash operators; I can’t remember the exact name. Well, it sounded easy: She wanted to interview me by phone and wanted me to share advice for business owners on how to reach their target market. It’s a topic I’ve talked about and taught for years and years so I figured, no problem.

The morning of the interview I got into Evil Phone Battle #127 with the Health Insurance Exchange and I was really agitated. The interview wasn’t for a couple hours, and I had some errands to do so I went and did them. Then I stopped at my neighborhood thrift store with about 20 minutes to spare before the interview. (Thrifting is my therapy.) Anyway, I kept an eye on the clock but left myself like zero extra time, and I got home literally right at 3pm, the time of the interview, and a minute later the interviewer called. I did zero prep, mental or otherwise, thinking that winging it would be easy.

Well, suffice it to say that I was wrong and it was a really shitty interview, and it was my fault. I felt completely unfocused and could hear myself rambling and struggling to make basic, clear points. Painful. I realized that even if I’d spent even five dedicated, focused minutes making a quick bullet list of the points I wanted to make, I would have done totally fine.

I sent the interviewer an email the next day, apologizing for not being very coherent. I kept it super brief and just said simply that I hadn’t felt focused and would be happy to answer any follow-up questions. She responded that I did fine, but still, I just feel lame about it. I haven’t seen the result yet and I’m dreading it a bit.

3. The interview is okay, but the design and/or copyediting is horrendous. Recently, The Times of India ran an interview feature with me, called “How I Start My Day,” which I answered via email. They hardly changed my words at all, but it is a hot mess copyedit-wise—which is especially weird since they had to add those errors into my totally clean original submission. The published feature is full of punctuation and spelling errors/typos; a whole paragraph is repeated at the end. WTF?

They also paraphrased some info from a piece I published at the Huffington Post in 2011, and inserted it awkwardly as part of my interview response. My guess is that the piece from 2011 is how they found me, and they wanted to use certain keywords from that piece to help with SEO. Or something. Who knows, but it was weird.

Then there’s the photo. They cut it from the high-res version that they requested and put it on some weird background. Whaaa? Okay whatever, but just kind of jarring. 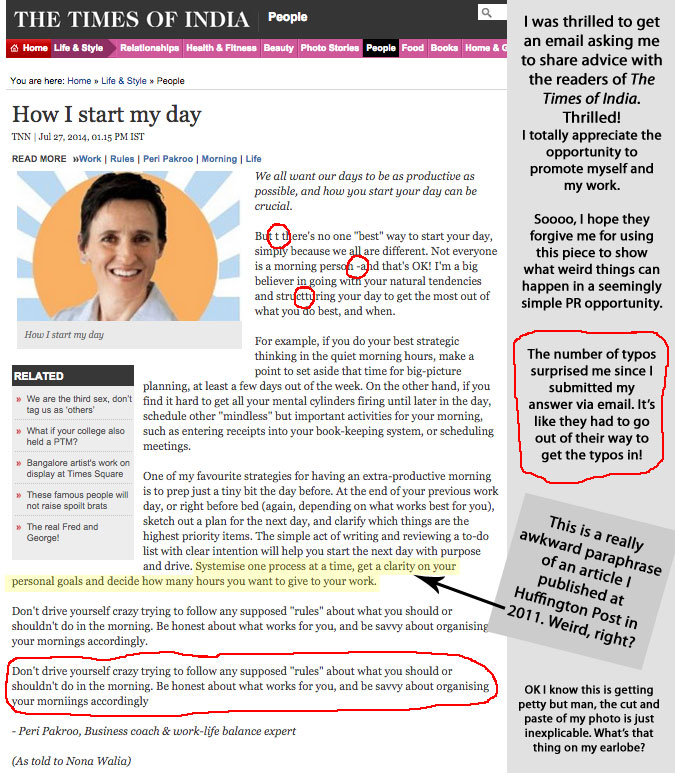 So the next time you have the good fortune to have an opportunity to get media coverage, keep in mind that the glorious feature in your mind’s eye might not turn out exactly as you expect. I’m more of a realist now about how my words (spoken or written) may be used, and realize that even when I think I’m crystal clear, somehow my message can still get garbled in the finished product.