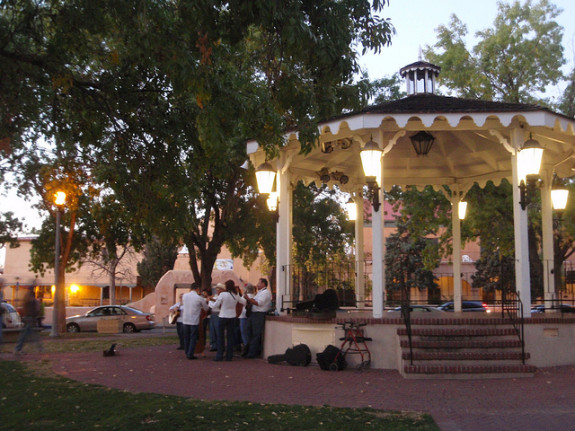 The gazebo in Old Town Albuquerque, where the “American Idol” auditions took place, and where I have played ohsomany times. Yeah, it felt weird to be there on different terms. Photo courtesy of Joel Kramer.

I didn’t know whether or not to believe it. They brought the “American Idol” bus to Albuquerque? As one of my friends said, “Their ratings really must have fallen if they’re coming here.” Well, I guess it makes, sense, really, because the line I ended up standing in was definitely not as long as it would have been in, say, 2004.

Tons of people think that “American Idol” is one of the only surefire ways to a career in music. Ain’t necessarily so, and I’m assuming you also think there’s more than one way to skin a cat. Er, earn a living making songs.

But I kept thinking about it. I thought about how Amanda Palmer promoted a contestant of The Voice in her blog. And I thought, hey, if Amanda Palmer is endorsing a certain lady competing in a teevee show and if other independent artists are using it as a platform to increase their visibility, it might be worth looking into.

So I read the gross waiver they make you sign. They say things like this, but in legalspeak:

We are allowed to say defamatory things about you!
We may require you to sign other creepy documents!
We own any video taken of you and will pay no royalties on any original material you perform!

I decided to go in spite of this.

I got up early and stood in line in the rain, feeling waves and waves of nervousness crash down upon me. This happened because I am no expert at taking auditions.

I hardly ever feel nervous performing in my little town of Albuquerque anymore—our community feels so small, and the venues I play at are so familiar that I can hardly ever get my adrenal glands worked up, ironically enough. So I approached the day as practice at managing that type of anxiety. I don’t think I did that great a job.

At nearly the end of the day four of us were there at the head of the line and we were—gasp!—sent before one of the two ominous tents where the—what to call them?—magical glowing beings sat, who bestow upon you the blessing of Talented! or Not Talented!

You are a singer. You stand on painted tape. You step forward and hand your creepy paperwork to the magical auditioner being, who is really just a person. The other three step back onto their strips of tape. You plink your ukulele, sing this song, and quickly realize that you don’t know jack shit about auditioning.

Of course I spent the next day or two mulling over the auditioner man’s comments. “You have a soft, pretty voice, but we are looking for more developed voices.” What does this even mean? What am I supposed to do with this information? I tried to take it as constructive criticism, but I really don’t know if I even should, when it’s certainly a canned phrase he uses endlessly in his line of work.

Here’s the moral of my story: I realized that if I actually want to audition for something again, I gotta get my shit together. I gotta practice and talk to people who know what the fuck they’re doing. I gotta go to auditions, and take them, and get rejected, and then do more. This is what actors do all the time.

I’m not sure if I’ll want or feel the need to do a cattle call audition like this again. Honestly, making DIY videos in my home is probably a better use of my time. But if I do, at least I’ll know a little bit better what I so didn’t know this time around.