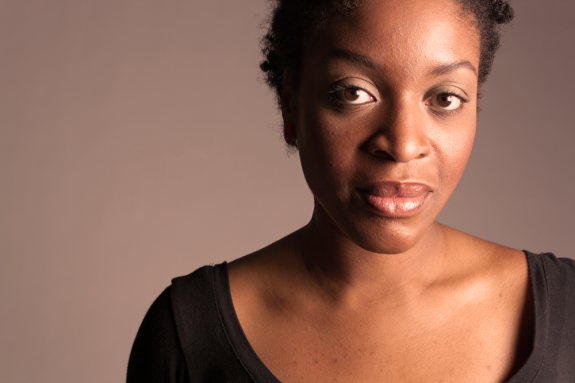 Joy Ike is a musician and founder of Grassrootsy, a DIY, business-minded how-to site for musicians. I had some Burning Questions for her about touring, and we ended up talking about that and so much more. Here’s her hard-won, road-tested advice on choosing the right venues, how often to play shows, and how much time to spend doing PR work. She also talks about her past life as a publicist for a book publishing company.

This is part one of our interview. Part two lives here.

Sage Harrington: As someone who’s never toured before, but has read and read and read all sorts of articles about it (at Grassrootsy! at Pyragraph! at Ari’s Take! at CDBaby’s DIY Musician! for example), I’ve noticed a few different styles of touring. There are people, like Ari Herstand, who seem to put a bunch of effort into one big show in an area every couple months—the idea is that he’s not burning out his audience by playing too many shows in one area at a time. Then, there are folks (like me) who tend to play lots of shows in one area (my hometown) all the time. What are your thoughts on that?

I really felt that if I could give all my time to music that my career would grow.

Joy Ike: I think there’s validity to both methods! In fact I think both work together very well. I played regularly in my hometown for many years—almost on a weekly basis. My goal was fan-building. I just played out until everybody (ok…not everybody, but most people) knew my name. Then after a few years of doing that, I began to really space my shows out. One big one every two months or so.

When you get to a place where you know you can easily draw 50-100 people or more at most any show in your hometown, you pretty much need to stop playing out so often. Because you’re kind of in a place where people, venues, festivals, etc. will start paying you good money; they know you have a solid draw and can fill their house. If you play out too much at that point, its hard for those people to pay you good money because your draw gets diluted and promotion for one show will detract from promotion for another. There’s a trajectory.

Now it’s really not possible for artists to play so frequently in cities they don’t live in anyhow. So I totally support Ari’s idea of spacing out shows every few months—especially when you’re on the road. But you need fans in order to make those big shows worthwhile. So I think when you first start hitting up a city for the first time, it’s okay to play there very regularly until you actually have a fan base that you know will come out to those larger, spaced out shows in the future.

You could essentially spend a whole weekend in one city—do a venue on a Friday night, an art festival on a Saturday, and a house concert on a Sunday. Three opportunities to build some serious fans all in one city. And those are the types of shows where one won’t hurt the other.

You just mentioned some different types of venues a musician can play. There are so many! The obvious ones are bars, clubs, theaters, art centers. I know you don’t do bars, because you talk about it in this blog post. Could you tell me about the moment you decided to stop playing bars?

I don’t honestly remember the specific instance but I know it happened after I had been touring for some time. I pretty much hit a wall. Nothing like traveling 3-4 hours to play a show where the audience doesn’t even act like you’re there. That will kill your soul.

I remember being discouraged and feeling like I was wasting my time and simply just running in circles with my career. Honestly, I’ve always shied away from bars from the start; I just do better research before contacting venues now. Some venues might not even look like a bar from their website, but if you dig deep enough, it’s easy to see which venues treat music like it’s not important and which venues make music the focal point. I pretty much rule out most restaurants (that don’t have a private music room) and clubs as well.

I think every artist is different in the types of venues they feel comfortable playing in so…to each their own. But my songs personally involve a lot of storytelling and listening to lyrics. Very lyrical stuff. So playing in non-listening rooms just falls completely flat.

Do you remember about how long you had been touring when you decided that bars weren’t gonna do it for you?

It had probably been about two years. I left my job in 2008, began seriously touring somewhere in 2009 or 2010. And 2011 was when I had to take a step back and really analyze what worked and what didn’t.

So you’ve been doing music full-time for about six years. What allowed you to make that shift?

I do have a pretty good handle on how to capitalize on an opportunity and build more fans.

I’ve been a full-time musician since June 2008. Many things were happening. I was still playing locally, playing out ridiculous amounts in my city (Pittsburgh, Pennsylvania). I’d been collecting tons of email addresses for my newsletter at shows, easily getting weekly booking. I really felt that if I could give all my time to music that my career would grow. It really would just require a leap of faith and some serious hard work.

I was also getting sick of my job. I loved what I did but I didn’t want to do it with the company I was with. On a much deeper level, my brother passed away from cancer and that was pretty much the straw that broke the camel’s back. I left my job the week after he passed away and never looked back.

I’m so sorry about your brother! It seems like his death made you realize that you should be doing something else with your time.

Exactly. It was more of a wake-up call. I had spent the year leading up to his death afraid of going out on my own. When he passed away, I realized how short life was and it was pretty much all-or-nothing. Thats actually the title of my last album.

What type of work you did you do before switching to music full-time? Was it a jobby job, like waiting tables?

No, I was a publicist at a Christian book publishing company! I really loved what I did. I booked radio and TV interviews for our authors, put together press kits, and put together book signings. I LOVED it! It was the best preparation for being a full-time artist! I learned just how important a pitch is and it taught me the importance of communication, following up, and having your shit together.

That’s so great! I love it when people love what they do. I also like that you’re into both the business side of your career as well as the music side. So many people (myself included) really resist the business side, i.e. sitting in front of a laptop. Do you tend to enjoy both of these types of work equally?

I do enjoy both! I often feel conflicted, actually. I honestly wish I spent more time on my instrument, but I absolutely love sitting down and booking a good tour, brainstorming how to promote a tour well, and doing all the PR stuff. Sometimes I enjoy that more.

The hard part about it all, is that no matter who could I work with (as far as hiring PR or booking help goes) I know how Joy Ike works better than anyone else. I know what works for me and what doesn’t. I’m always open to new suggestions, but I do have a pretty good handle on how to capitalize on an opportunity and build more fans. It gets frustrating because having other people in the mix sometimes limits how well I can promote.

Ideally I would just pass it all off (and hire help) if I could truly afford to. And then I would just focus on the music, and ultimately (in theory) I would enjoy the music more. But for now I feel like the PR is my primary job, responsibility, and burden because paying the bills relies on it. So until further notice, I will spend the majority of my time of that.

You mentioned that some artists can do well in bars: Brett Sparks commented on Pyragraph’s repost of your piece saying that his band The Handsome Family plays mostly in bars.

Yeah, I do think that’s true. I think if you do covers, make them your own, and even do original songs that are upbeat and fit the bar scene then you’re golden. Sadly, I have heart-wrenching love songs that sound sleepy in a bar atmosphere. I also try to think about the fact that most people don’t go to bars for the music. They do to meet up with friends, have a conversation, or hang out after their workday. So that’s another reason why my stuff falls flat. It requires attentive ears, and a room of people talking just makes me feel like I’m playing for myself. A major joykill. Pun intended.

Stay tuned for part two of our interview!