Originally published at CactusTractor.com, where the band recorded the shenanigans of their 2012 U.S. Tour in the Shape of Yemen. Cactus Tractor is made up of many people, today’s featured characters are David Bashwiner (alias Sebastian in some of these posts), Christy Cook (alias Ginger), and Orson, their delightful dog. Posts are written alternately by Christy and David. 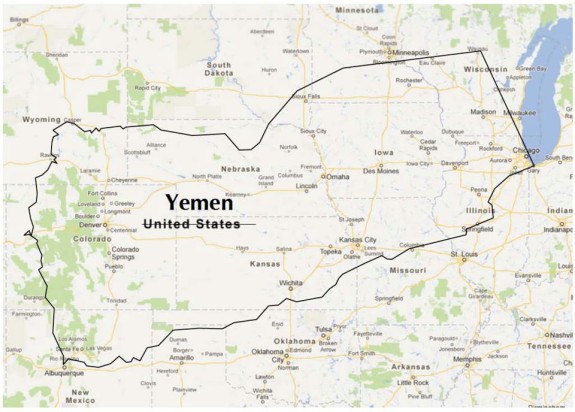 So here’s the story in brief: We played a show with The Yeah Mans the other night under the name of Bandana Verde. They misread our name and thought we were Banana Verde (like an unripe fruit), and so, to one-up us (before even meeting us!), they thought they might be able to co-opt/appropriate our name for their own sick uses and they all wore green bandanas. Of course our name was actually “green bandana” (in translation, for the dense), so they accidentally, instead of one-upping us, ended up paying us profound homage. (They spent the day making the bandanas themselves.)

So we wanted to do the same for them: pay homage while one-upping, if at all possible.

Hence the Yeah-Man tour (Yemen), which miraculously fits almost exactly into the route that we were planning anyway (lest it go to their heads). Shows already in Tulsa, Springfield, Chicago, Milwaukee, Omaha… More or less. Still working on Gary.

We were supposed to be in Palo Duro Canyon tonight for some camping, just south of Amarillo. So that meant leaving by about 11am. Which meant getting an oil change before that, for about 30 bucks. But the oil change turned into a brake replacement, cost 1400 bucks, and took till 5pm. Then it was raining and necessary to cook hot dogs (not related), so we left finally at six.

We’re in Vega, TX. Massive bug, basically the size of Christy, which she accidentally half killed, and then wasn’t sure whether to finish off or not. He looked like Jiminy Cricket, and his face was that expressive. He was carrying a briefcase. We righted him, and tried to send him on his way, but much of his abdomen was smeared on the ground and on the bottom of Christy’s shoe.

Then we found our room, at the Bonanza. While Christy was photographing the sign (we’d had a bonanza bagel a few days before at Winning Coffee in ABQ, with bonanza soup, and regular iced tea masquerading as bonanza tea), I quickly ushered all the roaches in the room into the toilet in the corner (sort of a jail cell type of place, but they allow dogs). Then we turned on the air and claimed beds (Orson claimed mine).

Like I said, we were supposed to make it to Palo Duro tonight, but we didn’t quite, and just as I was giving up I tried to say we could stay in a hotel or motel, but these came out slurred as “ho-motel,” which made Christy raise her eyebrows, since she thought I’d said “ho motel,” and I assumed she thought I’d said “homo-tel.” Then this became “homo-ho-motel,” and then finally “homo ho-ho motel,” with rooms made of chocolate cake. So we had high hopes. Nevertheless, we’re at the Bonanza. See pics. 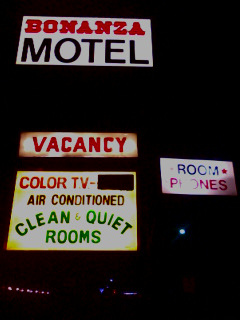 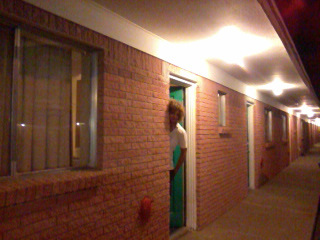 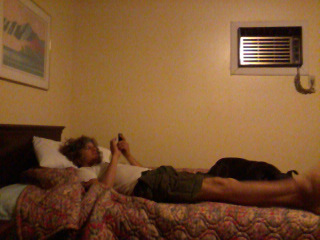 We got a late start because Bashwiner was giving me music lessons. He said he thought it would be a good idea for me to “catch up” to his PhD in music theory before we left, so about four hours later we were ready to go.

Our first order of business on the road was to think of a new band name. We’ve been changing it pretty regularly: Dave, His Dog and His Gun begot Bandana Verde which begot Cactus Tractor. We thought “why the heck not keep on begetting!” And Cactus Tractor begot Cat Distractor.

At about nine we stopped to have a light supper of hot dogs and Subway sandwiches. We sat at a little table nestled between wind chimes and a Slushie machine in a gas station super mart. I tried to drink some free water and ended up drinking some free blue-flavored mountain dew. But Sebastian thought I stole it on purpose and tipped off store security.

Now I’m sitting Gingerly on my bed at the Bonanza motel (in Vega, TX). Sebastian checked the mattresses for bed bugs by looking for blood stains. He didn’t find any but the idea of finding bloody bug stains on mattresses…is gross.

When I asked what he would do if he had found blood stains he said “I would have started running!” So at least we agree on the escape plan.

P.S. Now it’s morning and it seems like we’re off to a good start:

“I didn’t realize they were that massive of shoes, they’re like two dying suns on my feet”

is what I just heard Sebastian say, here’s what he actually said:

“Can I wear these (pants) with these shoes?” 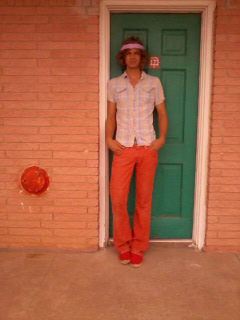 All photos courtesy of Cactus Tractor.