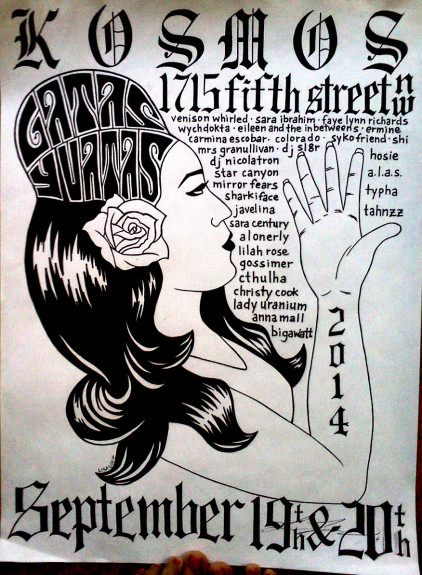 This week has been tinted purple for me.

Red for rushing, for warm excitement, for sprint-thinking. That’s always the way as the final details come together for Gatas y Vatas, the female solo performance festival I’ve been throwing for five years in Albuquerque, New Mexico.

But I got some midnight blues, too, the wistful kind, the remembering kind. Because this is the last year.

I’m remembering my little apartment with the concrete floors. In the main room, my new amp loomed all beautiful black vinyl cushion and promise. It was an impractical purchase. I didn’t even have a car, and it was really big. Every night, I had to face the thing. There was nowhere to sit in my apartment. I didn’t have a TV. I lived alone. I’d come home, and it was just us.

A patient crowd that included my mom watched me struggle with my gear for 25 minutes, easy. I was sweating.

I wanted to make a solo set. That’s why I started the Gatas y Vatas festival. I made a festival and dared 12 other women to make solo sets for it. But really I was daring myself. You know.

I had a gray and white pearl accordion and a few pedals. I made a couple of contact microphones for the accordion, and I ran them through the pedals. For weeks, I messed around with the gear. I could make good things happen, but not all the time, and not the same way twice.

This felt unusual for me. I’d been a singer for years. I’d played all around town. I’d even done some tours with a band. I felt like I could control my voice. I’d worked really hard on it. This was not the case for anything else. So many new variables! Accordion, amp, pedals, loop station. Years later, sitting atop my accordion case in a dive bar in Nashville, I would see a bartender get behind a mic and just sing songs with no accompaniment. She was magical—and ballsy. But when I started, I didn’t conceive of only singing. That just couldn’t be enough.

So I toiled. And it was mostly fun. The worst part was feeling lost. I would play and play, and I couldn’t tell if it was good or what. Eventually I would figure out that when something’s really good, you know it know it, because you love it so much. That’s the cream.

Then I played my first solo set at Gatas y Vatas, this party I threw in which I also ran sound, ran the door, did all the announcing and stage managing and ran around like a woman on fire. (I was.)

Of course I had technical difficulties. A patient crowd that included my mom watched me struggle with my gear for 25 minutes, easy. I was sweating. Eventually, I figured out that one of the power supplies in my chain was only half plugged in. I pushed that little metal piece the rest of the way into the pedal. And there it was. Bigawatt set No. 1. Accordion/noise jams with like some opera singing and a plaintive, purple song about being lonely that is still probably everybody’s favorite Bigawatt song. Three songs. Fifteen minutes maybe? Not even as long as the setup.

Since then, I’ve seen a lot of Burqueñas do the same thing: Make a solo set and play it for the first time in front a lot of people. There’s a special energy to a first show like that, especially when the audience is so ready for you to succeed. Everybody’s got their fingers crossed for you. I’ve seen a lot of performers come through Gatas y Vatas and go on to play all over Albuquerque all year long, sometimes form bands, go on tours or play festivals all over the place. And for everyone who has tech problems then and now: I know. Sucks. It’s going to be OK though.

I am so damn proud of what Gatas y Vatas has done. It brought people together. It drastically increased the number of women on stage around here. It did what it was supposed to do. It did it better than I could have imagined. It grew and grew. Manny Rettinger of UBIK Sound started recording the fest’s yearly compilation in the second year so we can create a record of these five years. It’s taken me a long time to realize what Manny is in this town and exactly the knowledge gap he fills, and I may have to write another piece just about that.

For me and for many Gatas (lady cats) y Vatas (thug women), fest time is like a holiday. All your friend-family blows into town, you hang out, you chow together, you play music. The best part is that the crew has gotten bigger every year.

People I didn’t know very well yet came to me and offered a hand. DJs Mello (Sanchez) and Tahnee (Udero) took me out for a beer and offered to help. Performers from previous years did, too. And that doesn’t even touch on the crew that’s run sound, the friends who donated cash or prizes for crowdfunding campaigns, the photographers and videographers, the brave performers, the artists who made the logos, screenprinter Brap Ola, the volunteers, the other festival organizers who’ve offered advice and resources, all our sisters at Titwrench in Denver. Women and men pitched in over these five years to raise this thing up.

I’ve got dried paint, ink and emulsion on my hands and arms as I type.

Two weekends ago, my sister Monica Demarco threw a Gatas y Vatas benefit concert in Tiguex Park featuring aerial performers paired on blind artistic dates with experimental musicians. A lot of people came to that show. I don’t even know how many, but a lot. And a couple dozen performers donated their physical strength, their talent, their gear, their time, their music. Watching that show on a sunny Sunday in the park, I was struck by how far this thing has come, from a haphazardly launched one-woman show to a multi-faced, people-driven, community-lifted event. Sarah Slater of Titwrench says: It’s not DIY, do it yourself. It’s DIT: do it together.

So why is it the last year? First of all, I want to take this thing on the road and bring Gatas y Vatas to other cities in this region, bring Albuquerque performers to other places and help invite new performers from other towns to the stage. Second, I don’t want the festival to lose momentum. That means it has to change. I like a big finish, so I announced the last annual GyV at the fest last year in the hopes that all the performers would really make something special for 2014. I think the shows this weekend will really be something to see. Lastly, a lot of the people volunteering for GyV have their own angles on music and performance, and I’d like to pitch in to fire up their rockets. I’d like to volunteer, to be a helper.

It feels crazy this week, preparing for the last annual festival. I’ve got dried paint, ink and emulsion on my hands and arms as I type. I love it all so much. My heart is heavy.

But I’m sure that when it’s time, Gatas y Vatas will come home again.

Gatas y Vatas 2014 is happening at The Kosmos in Albuquerque on Sept. 19 and 20. All ages. Credit cards accepted. RSVP at the Facebook event page.

Doors at 6pm, music at 6:30pm. $10 per day/$15 weekend pass. The event will include on-site screenprinting, women vendors and artists, food by Comida Mayahuel and more!