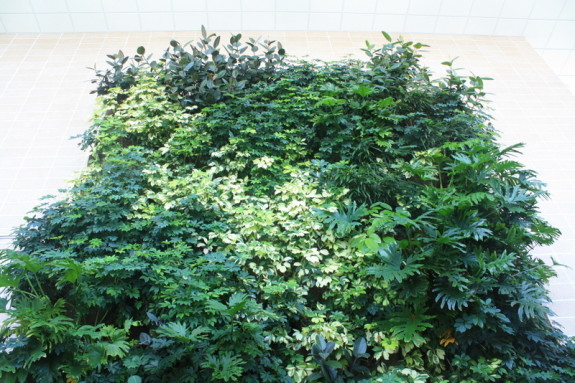 I love the idea of vertical gardening, green walls and creating living art. I think it’s plantastic that people want to garden in small spaces and green up otherwise lifeless areas. I think it’s great to use plants as a canvas.

Modern vertical gardening, in my opinion, is still in an experimental stage. It’s a relatively new trend that needs to work out some kinks.

From my perspective, many of the kinks are a result of a failure to properly inform clients about the longevity of the gardens, the true cost, the maintenance and the purpose.

Certain designers have rushed to create large-scale vertical gardens without considering exactly how to care for them once they are completed. The clients suffer for that, as do the gardens. The Internet is full of photos of dead walls because maintenance wasn’t a consideration.

I recently had an opportunity to revisit a vertical garden that’s located right here in Albuquerque. I’ve written about the wall a few times, here for example, and I wanted to see if it had improved in the year since my last visit. 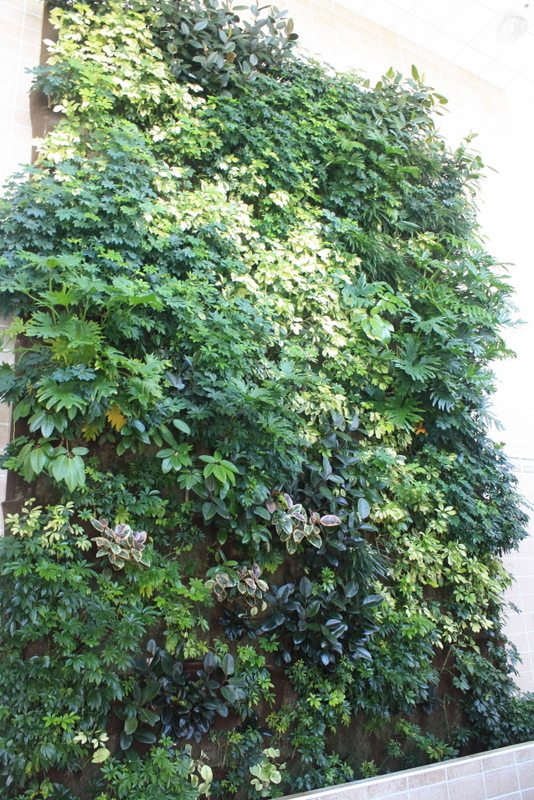 But the director of the building still hates it.

Let’s walk through some of the reasons why.

Let’s start with the plants themselves. The plants for this local garden were chosen based on NASA’s study of houseplants that clean the air. Unfortunately, the plants on NASA’s list are highly susceptible to spider mites and mealy bugs.

When I first saw this garden, the plants were covered in mealy bugs—it was super gross. That was one reason the director wasn’t happy.

The company that came in to maintain the wall after it was built conquered the pests and cleaned them off the leaves—an impressive feat. (The director is very happy with the maintenance company for their hard work.)

The designer sold the client on how much cleaner the air would be for his employees. Instead of clean air, the employees are subjected to an entire building that smells like a fish tank every few days. They also have to contend with fungus gnats.

Also, the designer didn’t provide the client or the maintenance team with recommendations on what to do with dead or dying plants. 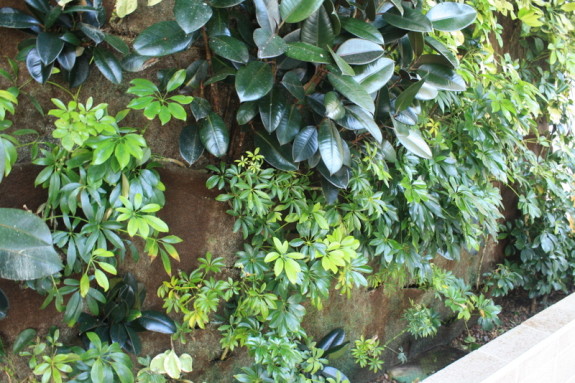 Looks like the maintainers of this wall are still trying to figure that out.

Plants die, so it’s important that designers discuss that with potential clients. Many designers like to think their garden designs will last forever and ever, but that’s simply not true.

Another reason the director dislikes the wall is because after it was built, he learned that he needed to dish out an additional ten grand to buy a cherry picker so workers could prune the plants at the top of the wall.

Why didn’t he know about the cherry picker ahead of time? Again, the plan was not well thought through. Had the designer taken maintenance into consideration, he would’ve realized that someone would need to reach those top plants in a safe way.

Other reasons that the director doesn’t like the wall: irrigation failures (no one explained that emitters get clogged with mineral buildup and need to be checked regularly), negligible savings on heating and cooling costs (part of the original promise) and continued maintenance costs (roughly $4000 per year).

There’s also the paranoia. The director was so worried about coming in on a Monday morning to find water had been leaking all weekend that he rigged an alarm to the wall so he’d be notified of irrigation leaks.

Personally, I find the director to be amazing. He took it on his own shoulders to correct so many of the problems that come from this wall. He’s forward-thinking and smart about how he deals with current and potential problems. But he shouldn’t have to work so hard, and he should’ve been better prepped by the designer.

When asked about the wall’s biggest benefit, the director answered, “Aesthetics.”

That’s the truth. And that’s how vertical gardens should be sold.

Instead of promising cleaner air and lower energy costs, designers should be selling living art. Because that’s what it is. Art made of living, breathing creatures that will grow and change over time.