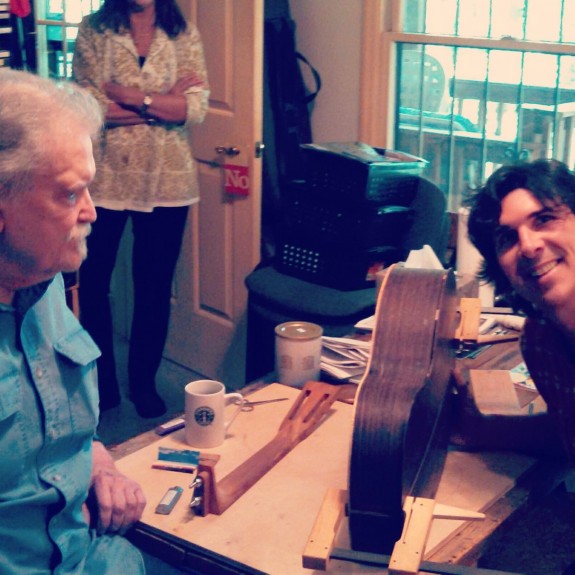 Hi there, before, I wrote a little bit on my experience building a guitar with my friend Guy Clark and here’s a continuation on that subject. I guess if there’s a theme to this one it would be you can fix most mistakes, the key word being “most.”

When we left off, I was just given a fantastic piece of old German spruce to use for my guitar top and I was really ecstatic about it.

I bought a $12 scraper and began to scrape the top and back the way I was taught. I found that the friction heats up the metal quite substantially and the scraping process burns the hell out of my thumbs. It was slowing me down and when I asked Guy about it he said that I was probably just doing it wrong.

I set the jig and cut the trenches. They came out just right.

I’ve since found out that it’s fairly common for this to happen and a good solution is to buy a pair of leather work gloves, cut the thumbs out and wear them while using the scraper. I wish I’d known. I’ll use this trick for the next guitar I build.

So having scraped the scratches left from the thickness sander from both sides of the top and back, Guy helped me determine which side should face out and which should face in.
I traced the exact shape for 000 specifications and used Guy’s band saw to cut them out, leaving a little bit of extra for overhang.

Guy had a bunch of rosettes in a drawer in his shop and said I could have one. I picked one that matches herringbone purfling.

Guy showed me how to set up the dremel tool attachment, I set the depth, found the exact center of my sound hole, measured to the edge, plus the distance to the inner band, center rosette and outer band.

I set the jig and cut the trenches. They came out just right. Upon gluing the rosettes in, I found that the larger center band had some weird twist to it. I used some wax paper and some clamps and fixed the problem. Guy said he’d never seen that twist happen before. That made me worry that, maybe, I’d done something wrong. Next I routed out the trench for the backstrip. I glued it in and clamped it with a caul. 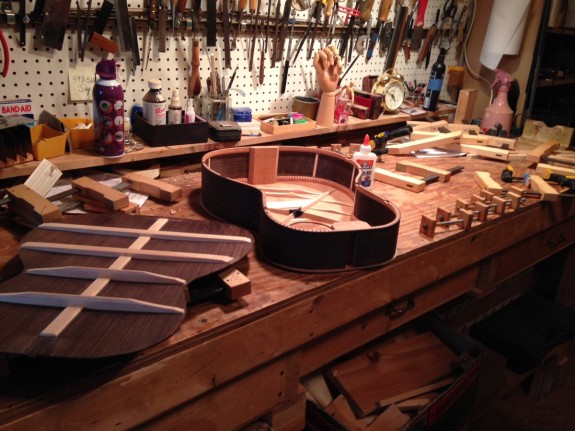 Guy was excited because things were moving quickly. It was time to cut out the sound hole and I meticulously measured and checked and double checked its location.

The next morning I dreamt of the solution and it seemed almost too simple.

Guy set up the dremel tool jig for the sound hole and I started cutting it. As it was going around I noticed that it was getting off the line. It started to drift and by the time I turned off the dremel I was almost the complete distance around and had drifted almost into the inner ring of the rosette. My heart sank. I showed it to Guy and he said that I should have stopped earlier when I first noticed it drifting. I agreed. He said that I should have double checked the tightness if the jig. Again I agreed. He said, “I bet you won’t ever do that again.” I won’t. I asked what he thought I should do. He held the top and, staring at it, said “I don’t know. I’ll have to think about it. Ordinarily, I’d start over with a new top, but you really want to keep this one, right?” I said I did. He said, “I don’t know, I don’t know.” I was feeling like a pretty big idiot by this point. I just couldn’t give up on this top. Now if you read the previous installment, you know why. That it was given to me by the brilliant luthier Paul McGill and that it was from the same batch of spruce used to make Guy’s #10 guitar which I swear is the best sounding guitar I’ve ever heard in my life.

So, with nothing to lose, I snatched the top out of Guy’s hands and started sanding away the area around the sound hole to the point of the inside rosette.

So, I have a sound hole that is 1/8 inch larger than normal and I’ve surely lost the blue ribbon in the beauty contest but I honestly couldn’t care less.

So that’s most of the dramatic news about this guitar thus far. 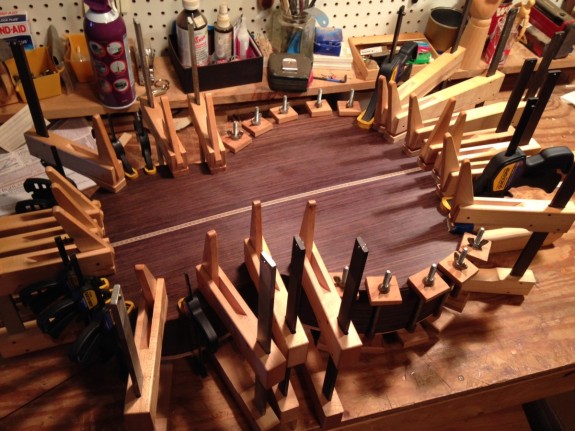 I radiused the top and back braces and glued them on their respective planks of wood and glued the kerfing and side braces in.

When it came time to glue the top on the back and sides, he measured the sides; neck block to tail block and said, “Noel, we have a major fuck up here. The sides are shorter than the top and back.” “Shit,” I said. “Lemme look.” He was right. The sides were too short and it didn’t quite line up with the outside of the top or back.

He was really agitated by this. I said, “Guy, it’ll get figured out.” He said, “Yeah, the little elves are gonna come down here and fix it.” I was feeling low. He said, “Come back tomorrow and we’ll work on it then.”

The next morning I dreamt of the solution and it seemed almost too simple. When I got to Guy’s I went downstairs to his shop before him and tried my solution before I could be talked out of trying it.

Sure enough it worked. The sides just needed to be stretched so that they matched the top and back. When Guy got downstairs he thought I was right so we set about gluing the sides on the top. 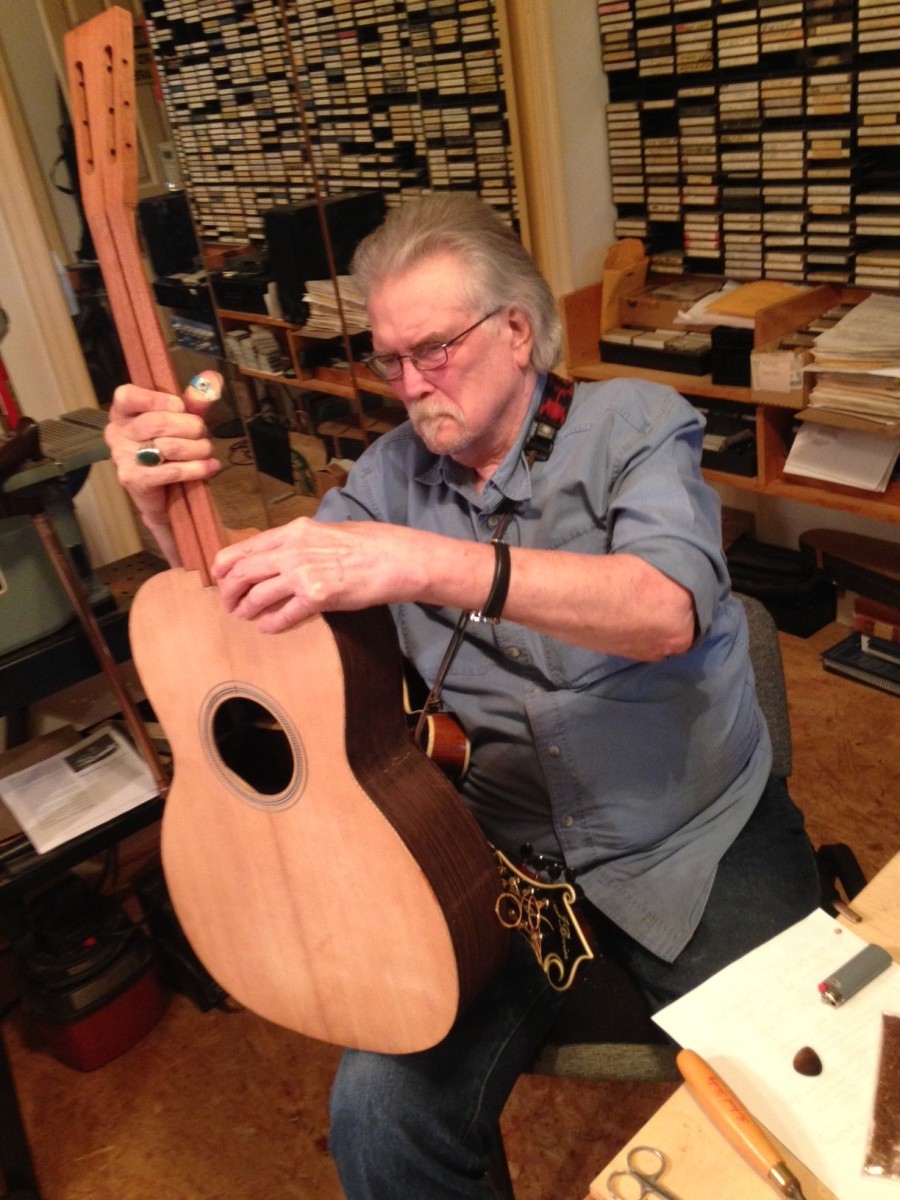 I had to go on the road for a month or so and when I got back we glued the back on. With that taken care of it was time to start working on the neck. When we got the neck into the joint it was cocked off at an angle so that the bridge would be in the wrong place and some of the strings would not even go over the sound hole. Guy instructed me to chisel and scrape the heel of the neck until it was right. He said that it was a difficult process that sometimes took a lot of tries. I got it right after about two hours of fussing with it. That’s where the guitar is now. Thanks for tuning in.