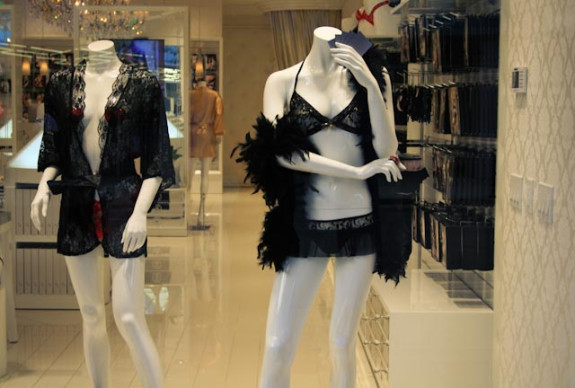 I was a highly paid professional panty peddler. For ten years, through my wedding bells to babies crying, and I was happy as hell. Climbing the ladder from the ground up, I was treated like lingerie royalty; met models and celebs, was given jewelry and trips and praise. Loved it.

Retail has an expiration date on it. Working your ass off to make money for someone else, even if you like them a whole lot, gets tired. I didn’t know it until I was on maternity leave with my first baby, sleep-sucked and blubbery, dreading going back to work. It was that fear and possibly weird attachment to my kids that gave me the emotional cojones to write RUNNING HOME.

RUNNING HOME took me years of corporate visits, pumping milk in the office on conference calls, manhandling bras at all hours, crying during my commute, stopping shoplifters, running sales meetings, treating that store like my home away from home—but it wasn’t. It wasn’t my home.

My home had my family in it and it felt like me. I thought about scribbling away at a novel that I had no idea what to do with while I was at work. Playing with panties, not doing the thing I went to college for, not doing the thing I’d wanted to do since I was an awkward kid with my mother’s haircut.

I went to work a miserable disaster at the thought of leaving my kids to do something that at the end of the day meant nothing. Being away from my kids made me physically ill daily. My job suffered, my family suffered and I was certain that if I stayed another year, I’d be dead at the end of it. Even my staff and my boss had an intervention with me, afraid of what was happening to me.

So I said FUCK THIS and I left my career to make a life.

I’d show my boys that you don’t have to do the safe thing to survive. I didn’t want them to know me as the withering martyr. They deserve to know the mom that isn’t fearless but is brave. Passionate. A fighter. An occasional pigheaded jerk. I want them to want to take risks and know they’re worth that. I want to show them I’m worth that too.

Sure, it was scary leaving the bulk of my family income, 401K, our health insurance, to depend on the scraps of a vampire book. I threw all of that fear and clawing determination into a main character. I made her afraid, and rash, dumb at times, and defensive. But strong. Determined. And most importantly, self-trusting that she was meant for something more.

Going on a feeling when it looks like fate has something else in mind for you entirely is goddamn scary. But my entire life I’d been a jumper-inner-and-never-looker-backer, and not only was I not about to stop, I was going to do it harder and faster now that it was mine.

I went from shyly telling people in the confines of the stock room that I was writing a book to querying, blogging, tweeting, going to conventions. I did public query critiques on giant screens with agents and writers; I live-pitched, phone-pitched, and read my first three pages out loud to rooms full of people.

I was one of only seven authors published with Books of the Dead Press last summer, and the only woman. I knew I’d done something.

Now RUNNING AWAY, the sequel to that first book, is going public. They’ve both been received better than I ever anticipated, and for that I’m not only grateful but fulfilled. I never really cared that the world thought vampires were overdone; they hadn’t seen mine, and fuck ’em if they can’t take a joke. I strongly believe that if you write the book you need to write, readers will need to read it. I never feared rejection because I don’t write to be accepted. I write because I must. I write because I love the look on my boys’ faces when they see me pound away at the laptop. And I write because I’m an animal without it.