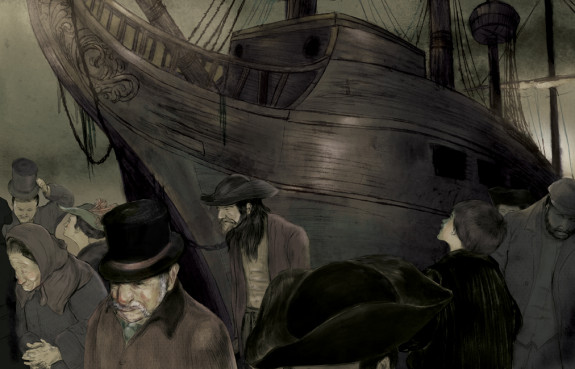 One of Jed Alexander’s illustrations from “Blackbeard’s Ghost,” a story he wrote and illustrated for Cricket Magazine.

“I’m a good writer. Everyone tells me so. I get great feedback in my critique group. I’ve even been to classes/workshops where [renowned author] has told me how good I am, but…”

I’m a good writer too. I’ve had stories and essays published in small press publications and websites (including this one). But it’s only this year, after writing seriously for over two decades (and your “seriously” might be different than mine), that I have finally gotten my first short story published in a children’s magazine that people have actually heard of (or some people have, anyway). It’s not exactly The New Yorker, but it’s print.

I don’t think I became a real writer until about eight years ago when I learned how to write every day. Every single day, in the morning, sometimes for only an hour, but every day. I know this is the advice that all writers give, but it won’t happen unless you do it. You can’t be a writer without turning it from a hobby to a discipline. And discipline is not about how much time you have to dedicate to writing, but the discipline of writing, with a schedule, as much a habit as brushing your teeth or taking a shower.

“If only I had the time, I would finally be able to finish my novel.”

If you write fiction, you have probably, at some point, aspired to write a novel. People read novels. They also read essays and articles, but most of us don’t pay much attention to who wrote them. And nobody reads short stories, or at least, very few people do. So for most of us, novels are the brass ring. They are how we will be known. Or at least that’s what we imagine. And if you want to write novels, you have to make a novel that actually looks like a novel—a beginning-middle-and-end novel that describes a reasonably logical progression of events somewhere south of 60,000 words. And if you write every day, eventually you will finish something. Maybe even that novel.

As much as you may have heard this before, it bears repeating.

To be a good writer, you have to finish things, and finish a lot of them, and you have to be willing to accept that maybe what you’ve written isn’t very good. It can be a painful lesson. In the last few years, besides all the essays and short stories, I’ve completed two novels that will never see the light of day. At the time I wrote them, I thought they were brilliant. They weren’t. I had to write not-so-great novels to learn how to write novels. That’s how you do it.

“I’m just waiting for the perfect time when I can take off work or go off to a cabin somewhere for a few months and write the brilliant novel that I know is inside me.”

The perfect time to fail—and if it’s your first attempt, you will probably fail—is right now.

No matter how good you think you are, your first novel is not likely to be very good because it’s your first attempt to do something that’s difficult and that you’ve never done before. There is a chance that your first novel will be good or publishable, or that you’ll find an agent to represent it and it will all work out. But probably not.

Just because I haven’t been published doesn’t mean I’m not good.

It’s true: publication is no proof of quality. There are lots of terrible published authors. Often the difference between a mediocre published author and an unpublished, but secretly brilliant author—which you probably aren’t—is tenacity. You have to finish projects. You have to submit your work. That may seem obvious, but if you’re truly good and haven’t been published yet—and publication is your aim—you probably don’t submit nearly enough. I know I don’t.

You have to be willing to submit to small publications and websites that no one reads before you can expect to get published in ones that people do. And you have to write something that people want to read, no matter who those readers might be. Your esoteric opus is not likely to see print, no matter how good it is, because publishers really like to sell books. It’s what they do. Readers are what you’re after. And even if this essay isn’t brilliant, if you’ve read this far I’ve succeeded in doing exactly what a writer is supposed to.

Yes, I already know all this, but I’ve paid my dues and I’m ready.

I feel the same way. I even managed to get an agent to agree to represent me. But an agent is a guarantee of absolutely nothing. You still have to be good. To be fair, I acquired this agent, who represents both writers and illustrators, on the strength of my illustration work. She liked my illustration, but read my first novel and gracefully told me it wasn’t ready. She said it was well written, but good prose isn’t the same as a good novel. You have to be good at writing novels if you want to write novels.

I didn’t submit my second novel because I figured out on my own that it wasn’t quite there. My agent has since submitted several of my kids’ book proposals to various publishers. Kids’ books aren’t novels, but I would be content enough to have a picture book I both wrote and illustrated see print by a reasonable-sized publisher.

I’ve self-published my own picture book, and even got a small publisher to distribute it, but self-publishing doesn’t have quite the same sheen of legitimacy—or the readers—that a major publisher offers. Which doesn’t mean that a book published by a major publisher will be successful—and it likely won’t be—but more than likely you’ll have a greater number of readers than if your book is self-published or small press. That’s the hope, anyway.

I think it’s harder to write a truly good picture book—just to write one, let alone illustrate it—than it is to write a good novel. Compared to the number of good novels out there, there are few good picture books, but I understand why you might think novels are sexier, particularly if writing is your main discipline. They’re certainly more highly regarded.

So after all of these submissions, I received all the rejections you can expect. And after doing a number of illustrations for Cricket Magazine, I finally got the first story that I both wrote and illustrated published in this October’s issue. It should be out right now. It’s called “Blackbeard’s Ghost.” Please purchase a copy.

And as much as you may have heard this before, it bears repeating, because I’m doing what you should do if you aren’t published and want to be. Because this is what being a fledgling—and still struggling—published author looks like. You have to start somewhere. And as modest as my accomplishments have been, in the competitive world of publishing, I’m still the exception.