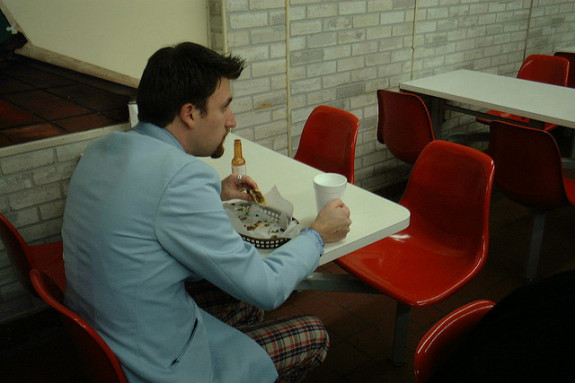 “Even a musician has to eat.” That’s a statement I heard growing up without ever thinking anything of it—it’s some stupid figure of speech that’s more arbitrary than it is poetic, and something rarely uttered by actual musicians. Lately though, I’m finding more and more poetry in that statement and it took a late-night Taco Cabana Taco Combo epiphany to trigger it. It makes me wish William Carlos Williams was a pedal-steel player with a soft spot for 24-hour Mexican food; oh, what a world that would be.

I’ve come to realize that I depend on 24-hour restaurants as a working musician and I’m quick to romanticize them. My working hours are usually pretty unpredictable if not altogether fucked. By the time I’m done playing a show, packing the car, and paying the bar bill (if applicable), I’m most likely hungry/hangry and chances are any decent restaurant/diner has long since closed.

This is where that stupid figure of speech starts coming back, and a musician has to act out of necessity/availability. One can only frequent the Flying J so many times before taking a considerable, gravy-soaked chunk out of one’s life expectancy.

Enter Taco Cabana. It’s no secret that I have an undying affinity for Mexican food, and this one venue offers consistency, sustenance, affordability, and a beautiful beacon of neon that cuts through the early mourning abyss like a taqueria lighthouse. Having grown up in Albuquerque I was introduced to the Taco Combo early on, well before I ever played music professionally or realized how plaguing late-night hunger can be (avoiding Allsups “chimis” and Wafflehouse grits at all costs). Now I’m realizing just how convenient Taco Cabana is for a working musician, working late nights full of cheap beer and kitchen-less establishments, sometimes with as little as four bucks to spend.

Say you’ve just played a late show. For the hour or so you played, you’ve ultimately put in four or more hours of prep/breakdown time in, you probably already drank through your drink vouchers and maybe dipped into your tips for another round of cold tallboys (make and model insignificant, so long as they’re cold enough to mask the flavor). What about this lifestyle wouldn’t warrant you being hungry and craving grilled marinated meats, chips and salsa, and an agua fresca? If this applies to you, then you’re in luck because we live in a city with these 24-hour spots that are willing to whip you up a meal at three in the morning. 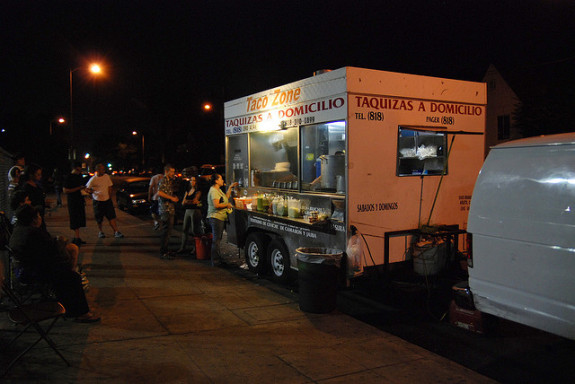 I’ve been praising Taco Cabana because it’s my favorite 24-hour restaurant, but I really do feel that all 24-hour restaurants deserve some amount of praise, if not cult-like appreciation. They’re sanctuaries for the night owls, socially awkward, insomniacs and altogether strange. They give a sense of normality to those of us working weekends for nearly nothing, losing sleep to discuss guitar tone and set lists, losing hearing stereocilium by stereocilium in dive bars with terrible sound and preparing for the string of shows next weekend. The ritual of fajitas and tortillas at 4am is humanizing and offers a chance to exercise the normality that so many others take for granted.

Here in Albuquerque I’m thankful for the few 24-hour restaurants we have, but the number is still limited. Bigger cities like New York, for example, offer a damned cornucopia all through the night at a price musicians can afford. This isn’t to say we’re lagging behind though. Sure, I’d love another couple late-night diners to get bad coffee and greasy hashbrowns or a great Ethiopian roach-coach dining experience, but early-morning carnitas trumps most diner/truck fare any day. Disagree? Bring on the debate.

When met with the harrowing decision of late-night post-music and beer fare, give Taco Cabana a shot. Share in this taqueria ritual and tell me you aren’t a believer.