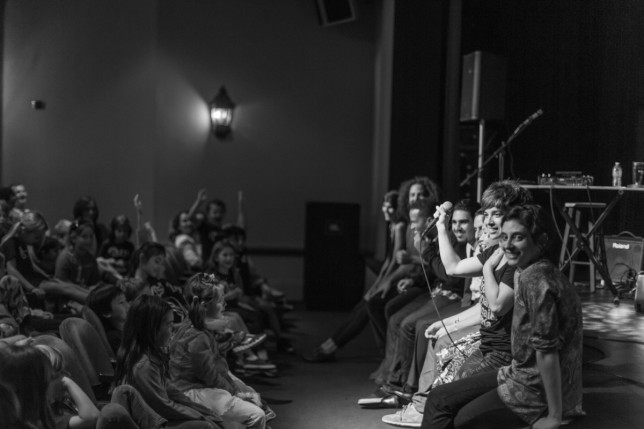 You know that phenomenon wherein you learn a new word, or you meet someone you’ve never met before, and that word or person then continues to show up in your life as if to harmonize with that recent enlightenment? I love that. It was recently brought to my attention how the arts—and I mean the general definition, the thinking and activism that is constantly creating and problem-solving—are the root of every facet of innovation that occurs in a community. By having a strong, creative mindset that places itself in the vanguard of a community, that community thrives. It may be a simple philosophy, hell, a generalized one bent on idealism, except that once it was brought to my attention, recognizable moments of its truth started popping up everywhere.

Especially when I heard OneBeat was coming to Albuquerque. OneBeat characterizes itself as an “an incubator for music-based social entrepreneurship, where innovative musicians from around the world launch collaborative projects designed to make a positive impact on local and global communities.”

OneBeat is an initiative of the U.S. Department of State’s Bureau of Educational and Cultural Affairs, organized by Bang on a Can’s Found Sound Nation. As of October 8, 25 musicians from 17 countries have gotten together in Saratoga, California to work on collaborative musical projects, produce tracks, school local up-and-coming talent, and brain-box with local entrepreneurs, educators and other philosophically sound idealists.

To name a few of the fellows: Ahmed Moorea, a 24-year-old oud player and composer from Iraq; Kyla-Rose Smith, a vocalist, musician and dancer from South Africa; Alexander Shirunov, an accordion player and educator from Russia; and Peni Candra Rini, an Indonesian composer, educator and one of few female contemporary vocalists performing sindhen, a female soloist style of singing. Seriously, the spread here is so staggering. [Ed. note: We will be publishing a Q&A with several of the artists in the coming weeks!] 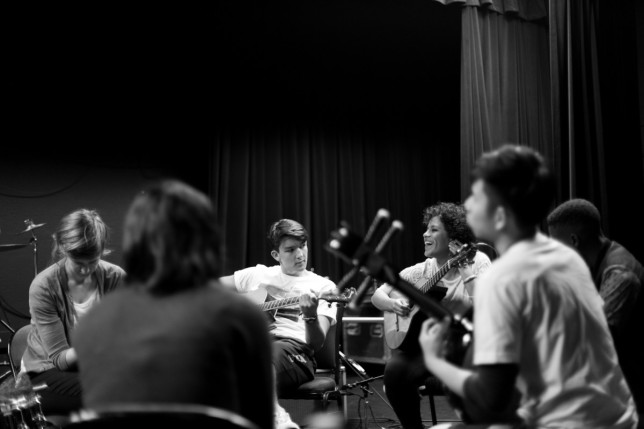 After this two-week intensive collaboration, they take their creations on the road. They’re hitting San Francisco, LA, Arcosanti, Albuquerque, and finally, Ghost Ranch. 516 ARTS is co-presenting the climactic Albuquerque show, giving more repute to an already outstanding presentation, considering how many home runs 516 ARTS hits with their exhibitions, events and programs.

This is the first time OneBeat has ever done a Southwest tour. Chris Marianetti, an Albuquerque native and co-founder of Found Sound Nation, told Global Music’s Megan Kamerick:

In the past two years we’ve done a very Eastern Seaboard tour, starting in Florida and then ending up in NYC for the big final show, and I think we wanted to try something a little different this year. Instead of moving from smaller communities in Florida to the big cultural Mecca of New York, we’d start in the Bay—the Silicon Valley, this sort of technology Mecca—then we’d travel down to LA and slowly move our way inward. And being from New Mexico, and knowing just how true our motto of “Land of Enchantment” is, I was really excited to bring the tour through there and end up in New Mexico because I think it gave us a chance to try something different for the final show. And also, after this final show, we’re going up to the Ghost Ranch for some final recordings and final reflections. It’s very exciting to try this new ending.

Thank you, Mr. Marianetti, for bringing this to Albuquerque. We’re ready for our positive comeuppance. Personally, I have realized that the career I want to create for myself is not solely committed to simply furthering my own self, because my own self has to live somewhere. I love living in Albuquerque, but the Albuquerque I live in needs help with its cultural infrastructure. As an artist and creative thinker, it is, in part, my job to ensure that I grow my community as much as I am growing myself. Projects like OneBeat help expand Albuquerque’s palate, enabling us to come into ourselves, as well as proving, once again, that we are a cultural mainstay, and disproving Bugs Bunny: we aren’t just a place to turn left! 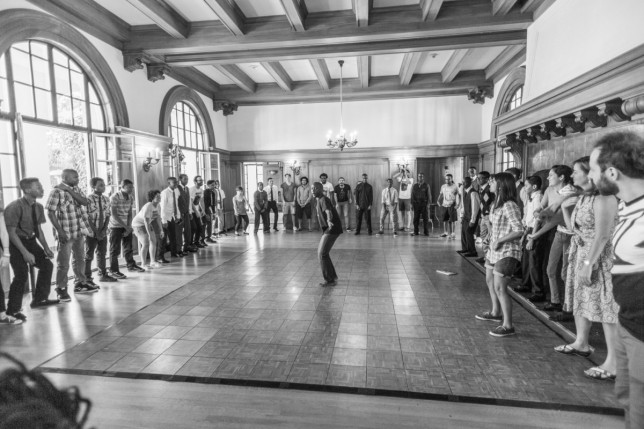 Part of the collaboration we’ll see at the big performance in Albuquerque, which will take place at the Blacksmith’s Shop at the Rail Yards, has to do with Albuquerque-local artist and curator Billy Joe Miller. I met Billy Joe on happenstance two summers ago when he approached me on the street, told me I had that everyman look, and asked me if it was alright if he photographs me.

What I’ve come to understand about Billy Joe is that he treats every moment as an opportunity to create. Everything that surrounds him is a possible moment of collaboration. Furthermore, his art and installations are incredibly inviting, beckoning to the audience to enter into their space. I got Billy Joe on the phone and asked him about what an event like this does for a community. “It shakes up how we see events, how we see what is possible. The most exciting part about it is you’re going to walk into a world that will be there for four hours and then disappear. It’s a rare opportunity. The identity of the space sort of being mimicked by the art and music.”

What we’ll see from his curatorial undertakings is a show that gropes at the themes of Day of the Dead, including the ideas of thresholds, death, travel and crossroads. The Rail Yards is, in this case, a very fitting locale, considering it is an abandoned hub of comings-and-goings. Installation art by Michelle Montjoy, Ellen Babcock, Cedra Wood, Adam Wohlwend, Lance Ryan McGoldrick, Augustine Romero, William Feeney and Corvas Brinkerhoff will create a landscape through which to travel to the music. There will also be video installations by Karen Hipscher, Jackson Glasgow, Temujin Doran and UNM ARTS Lab, and a wonderfully interactive performance art piece by Edie Tsong.

OneBeat choosing Albuquerque is the equivalent of a thunderstorm for the desert. Or a honeybee to a flower. The example I am sure they will set is no paltry matter. Certainly, the 25 fellows are collaborating for two weeks in the Bay Area, but the two weeks following will be instances of their collaborating with communities. OneBeat is effectively personifying that altogether perplexing, aforementioned phenomenon: They are showing up when the hinting at tangible interconnectivity—not only within communities, but between them—is so prevalent. They are 25 harmonizers epitomizing what is possible when we listen.