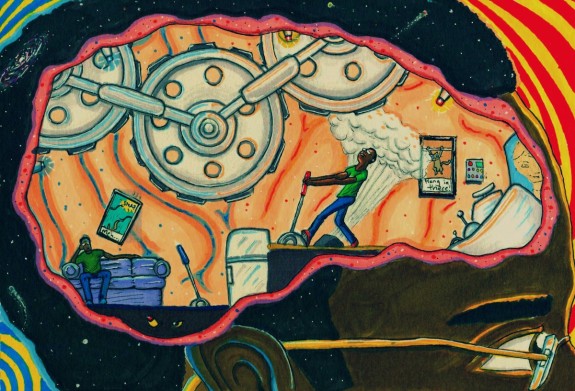 So you’ve got the bipolar. Don’t trip. It’s not the end of the world or the end of your career; it’s the beginning of the hardest and most fulfilling lifehack ever.

Being bipolar has its advantages.

We crazies, in the manic-depressive way, tend to be more creative than sane people. My best guess as to why this correlation exists is that the wicked cleverness and creative genes which make us so awesome combine like an evil Voltron to make us bipolar. Ironic? Totally. But nature can suck it because we flow with our disease when it behooves us and paddle against it like a one-armed seal trying to hump a colony of sea cucumbers when it doesn’t. Which is why, for us:

Being organized isn’t a pipe dream, it’s a necessity.

It’s a type of organization that normos will never understand. Our lucidity and stability is tied to the totems of order and scheduling. If you’re not bipolar, I bet your calendar is. I bet you go through stages of trying to tabulate every moment of your day but give up quicker than your WordPress blog on Tunisian raw food diets.

My plan instructs me to buy food, water and writing supplies.

Normos can function without that level of organization while we often can’t. A Google calendar becomes a backup for our shaky memory; a tidy bedroom becomes a refuge away from the anxiety-inducing world; and when depression makes eating or showering seem as daunting as an essay on Prussian economics, a high-definition routine makes the mundane a compulsion.

So maybe you’ve got the crazies and aren’t organized at all? Well get on that shit now and it’ll make you more productive than your emotionally benign peers could ever dream. Even if you love to be a slob, you might find that color-coded cubbies and tighty-whitey filing bins take some unnecessary strain off your overtaxed psyche.

Yes, organization will be a better medicine to you than most, but let’s talk about the nitty-gritty of our shared diagnoses.

Channel your mania or hypomania.

Do it, and watch the ideas flow like an endless ribbon of your favorite soft-serve ice cream. Nothing’s better than letting St. Francis de Sales possess your fingertips to unleash the next great American BuzzFeed article; but please, don’t play games with your meds.

Don’t try to force a manic episode with drugs, alcohol, sleep deprivation, etc. It’s just not worth the risk of arrest or financial ruin. Do make a “pink plan”: an 8½ x 11 tucked in a Trapper Keeper that reminds you to make the most of that preternatural charisma and particle collider laser focus. My pink plan instructs me to buy food, water and writing supplies, and outlines ideas I’m usually too lazy to tackle. But manic you is still you and anything accomplished in that state was in your grasp to begin with. Now internalize that reality and try to remember…

Generally, being depressed is terrible for productivity, but having been depressed is great for understanding yourself and the world. I started writing when I decided to stop running from my depression and started fighting it instead. Looking back, even the lost battles were dry duff for the self-examination that makes my writing passable.

Realizing that perceived constants are more illusion than reality (i.e. my sense of control over my emotions or a causative relationship between how I feel and what’s going on in my life) made self-expression feel as necessary as breathing. I suggest a daily creative task, be it a sketch in your notebook, a poem for a friend, or shouting into a pillow that reminds you of the sky that morning. And whaddya know? Doesn’t that fit perfectly with the whole being organized thing? Being depressed blows, but reflect on it, and I promise you a gooey inspirational center in that big mess of crappy feelings.

Life would be easier without mental illness, but getting something out of life is about accommodating the insanity of existence rather than constantly denying it. Embrace that you are nuts and don’t let the world’s insistence on uniform normalcy allow you to ignore the advantages you have.

Andrew Andromeda is a self-described poet and mathematician. He spent several years working in politics, several years in marketing, and several years learning mathematics and geology at the University of New Mexico, far from his native land of Oakland, California. Andrew’s greatest fear is to die without friends and his greatest dream is to live and die on Mars. He fully expects one or both to happen. Bio photo by Kate Burns.

View all posts by Andrew andromeda →