Originally published at CactusTractor.com, where the band chronicled their US Tour in the Shape of Yemen. Here, David, Christy, and their dog, Orson, travel through Illinois. 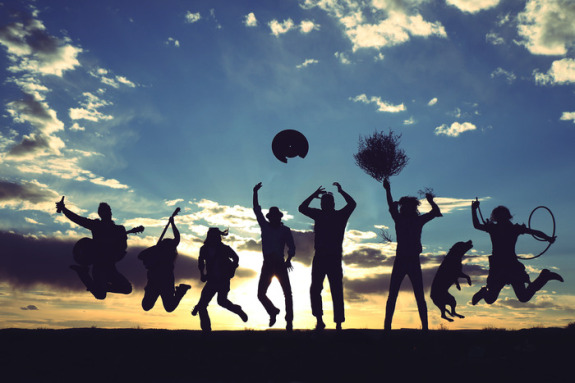 We left Springfield, Illinois yesterday feeling like rock stars because we played a disproportionately large number of shows for the days we had been in town, we made a lot of friends and were recognized virtually everywhere we went, a few people liked us on Facebook, and we had been keeping vampire hours (though not vampire practices, out of fear of the well known former president/vampire slayer who protects the citizens of Springfield from the undead).

Our last day in town was spent touring the Old State Capitol building—which incidentally is where the aforementioned president’s body was brought after his death—sleeping and eating. Our last night in town was spent playing two hours’ worth of music at the Tin Can Pub, where we were joined by the self titled “Coolest Guy in Springfield,” Mason Summers, who played an instrument previously untested by the Cactus Tractor gang: a tin soup can struck with a seashell!

The soup can doubled as a drinking vessel and served Mason well at the Celtic Mist (pronounced by Springfieldians as if they are imagining Larry Bird’s head popping out of the clouds), a pub we visited after the show. A portion of beer had just been poured into the can when Mason set it down to demonstrate a dance he called something like the “slanky dance.” When we returned to our drinks the can had mysteriously disappeared.

After questioning all attendant bartenders, it was discovered that one of them had indeed thrown the can away. Being not only a can, but also a musical instrument, a mug, and possibly much more, this discovery was more than a little upsetting. Therefore, all parties were very pleased when the bartender returned with the can retrieved from the refuse pile. 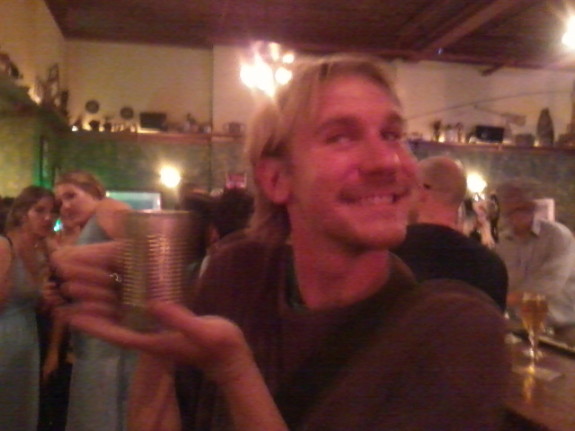 Mason, pictured above with his prodigal can. Courtesy of Cactus Tractor.

So, we were high on stardom (and low on caffeine) as we left Springfield on our way to David’s dad’s house near Chicago. We arrived after nightfall so we tried to make a quiet, unobtrusive entrance: which David instigated by sneaking around the house and spying in windows to see if anyone was awake. Orson shot into the bushes chasing some night animal as we discovered that David’s father was, indeed, up. We knocked at the front door and were surprised when its opening corresponded with the arrival of a sickeningly strong stench. We didn’t notice at the time that the smell’s arrival also corresponded with Orson rejoining our group.

After a brief series of investigative smell-searches (and gag reflexes) it was discovered that poor Orson had chased and then been sprayed by a skunk. Our arrival became slightly more conspicuous as the house filled with the volatile aroma of skunk thiols. Luckily we had all the ingredients needed to dissolve the smell on hand. Unluckily we didn’t think to apply them to all surfaces of Orson, and focused on the visible yellow spot on his chest. After we’d tossed out the remains of the odor removing potion we noticed that Orson’s face was still radiating a less awful, but still remarkably bad, scent.