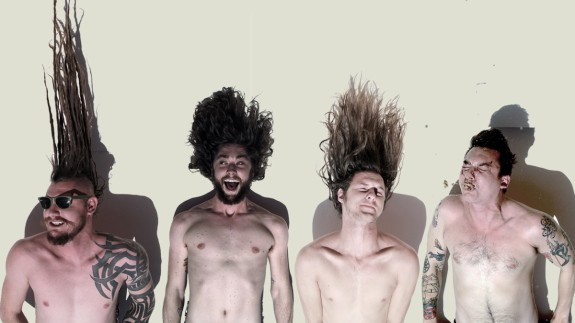 Not you, that’s the name of the band. I’m not asking you to describe yourself. I’m asking myself to describe the band, YOU. Because the first time I saw them play with The Lymbs at Launchpad, I could have easily answered that question. I would have said, “They’re a psychedelic rock band from Albuquerque.” Now, I couldn’t do it.

They’re rock, but everything within the genre, from the psychedelic sounds of Shining Atop the Pyramid, to the harsh almost-post-modern-math rock guitar of Green Suite, to the banjo indie-pop rhythm of Soul Eater. Some people are going to fucking hate me right now, but here’s the thing, I can’t even classify the songs themselves within a sub-genre. What I said just touches on one aspect or change in a sound that is constantly expanding and contracting.

I’m not a fucking music critic. I’m not even well-versed in music, well, not as much as Eric Lisausky (the drummer) at least. But I know what music does to me. YOU takes your ear, twists it, then feeds it a bunch of PCP until you reach a state of euphoria.

So in anticipation of their upcoming Halloween show (details below), I asked YOU, what’s your deal?

Don’t squint or make a we-totally-just-fucked-up face to your bandmates when you fuck up on stage.

Staying true to our lifelong DIY ethic, it was only natural that we self-released 500 units of Cadillac Sweep/Shining Atop the Pyramid 7″ in October of 2013, and then pressed 190 CD copies of our debut album Ambivalence in April of 2014. Both of which sold out during our highly successful 31-date US-Mexico tour. In the 17 months the quartet has been together, we have self-booked three tours consisting of countless shows in New Mexico, 47 out-of-state shows and one show in Mexico.

YOU met while working as seamen on a Transcontinental Shipping Company liner and learned how to play instruments by watching MTV News.

3. What’s the worst gig you ever played? Dish all the juicy bits.

This question denotes a negative approach to spontaneous musical creation which we expressly reject.

4.Who are your favorite performers at the moment?

On stage, never tune strings while amplified. When loading in and loading out, don’t let your girlfriends or boyfriends help you. Don’t squint or make a we-totally-just-fucked-up face to your bandmates when you fuck up on stage.

You’re always going to be nervous or afraid in some way when performing, do it anyway.

Be nice. Nobody likes a dick, famous or aspiring, and the band stuff will work a lot smoother too.

YOU will be playing Friday October 31 at Burt’s Tiki Lounge. The event is free and will also feature: Abandoned Mansions, Storming The Beaches With Logos In Hand, and Texlyvania.