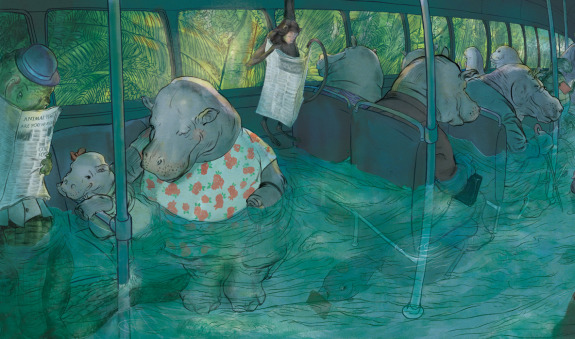 It wasn’t their fault. They gave me many of the tools I needed with the limited resources they had. At the time, the program was underfunded. I’m told that the department has expanded considerably since then, and from the work I’ve seen by recent graduates I have no doubt that it has. I had great teachers, and they provided me the foundation to learn what I know now.

Auteur comics and graphic novels have risen from the small press into the mainstream literary world.

Illustration is storytelling, not painting.

When I was in school, I loved modernism. I loved the London Figurative School and the German Expressionists; I loved Picasso and Miro. I felt split down the middle. I was attracted to illustrators who looked like modernist painters, like Marshall Arisman and Ralph Steadman, but I was also attracted to contemporary cartoonists like Dan Clowes and Jim Woodring. And I still had affection and nostalgia for the artists I grew up with who did picture books like Sendak and Seuss. But I didn’t know how to consolidate all this stuff. I didn’t understand how it all fit together.

What I didn’t know then was that great illustration has more of a relationship to literature than painting. Illustration uses the vocabulary of painting in the service of storytelling. And even if the story isn’t one that interests you—even if its object is to sell something, or to illustrate a story that isn’t particularly good—the quality and craft of storytelling that exists in the work of the best illustrators is worth paying attention to.

It was only recently that I grew to appreciate golden age illustrators like Noel Sickles and Albert Dorne. I learned that when they do well, they are able to tell a story with clarity and purpose with images that illuminate and elaborate on their content, sometimes in the most subtle of ways. The content and the craft together transcend both.

The earliest representational paintings were all about storytelling. From Raphael to Rembrandt, narrative was an important component of the craft. When picture-making moved beyond this, it turned into something else. The image for its own sake. There is contemporary painting that is illustrative, and the best of it implies a complexity that goes beyond the literal. But this isn’t the objective of illustration.

The problem is that illustration is too often perceived in terms of painting. It is literal, and by consequence, is often seen as simplistic when compared to painting. And very often, illustrators have little control over the content of what they’re producing—and illustration must reflect that content—so this, too, seems like a compromise of its integrity. Therefore, if you look at illustration just in terms of painting, or its commercial or otherwise banal content, the purpose of it is easy to ignore.

The art and literary worlds need to acknowledge that illustration has its place somewhere between both.

During the golden age of print media (a period that started somewhere just before, and ended somewhere just around the middle of the 20th century), most illustrators did not have much influence over that content. The exceptions were author/illustrators and creators of books where the illustrator had full rein over both image and story, such as the best cartoonists of the turn of the century, and the best children’s book illustrators of the ’50s and ’60s.

Just as in the literary world, sometimes the content was more commercially driven than others. But more recently we’ve entered a new era of the auteur illustrator, where more illustrators and cartoonists have control over their own content. Auteur comics—or graphic novels—in the last couple of decades, have risen from the small press into the mainstream literary world. And picture books and illustrated books are still a place where illustrators thrive. Illustration and cartooning are more frequently reaching out of that invisible chasm to find their true place as literary forms, and the illustrator/auteur has been an important vehicle for that change.

The division between the fine arts and illustration continues to be a strong one in academia. Part of this is because it’s true: Illustration is not painting. But painting and the tradition of painting provide us with our tools and foundation. The missing component, which is critical, is a literary one. We as illustrators need to borrow as much from literature as we do from painting. We need to acknowledge the importance of both these traditions. And at the same time, the art and literary worlds need to acknowledge that illustration has its place somewhere between both.