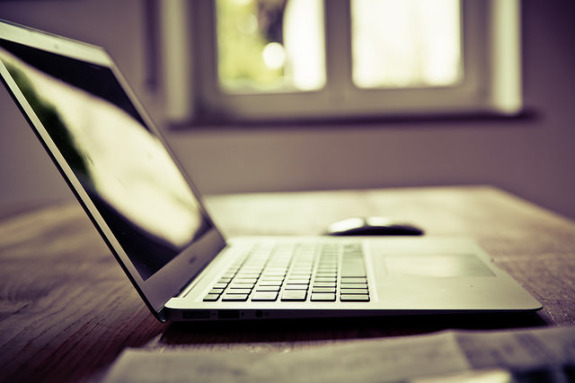 As an indie musician, you may end up seeing more of your laptop than your instrument. Photo by Markus Spiske.

Originally published at Indie on the Move and written by Guest Blogger Chris Lee of The Shakers, a melodic high-energy rock act from Los Angeles, CA.

When I started playing guitar, more than two decades ago now, I was just a kid in my bedroom absolutely in LOVE with the sounds I could painstakingly create on my instrument of choice. It was the late ’80s, I was probably in 1st grade, but I was perfectly typical in the immediate grandiose visions I had of being the next Metallica, Nirvana, or Smashing Pumpkins. It made complete sense. I would practice my rock god guitar moves every day until I was good enough to form a band (or just form one IMMEDIATELY to completely annoy neighbors/parents with incredibly loud and amateur guitar playing/songwriting). We would play some shows in our friend’s back yards and we’d be SO awesome that the big local venue would just HAVE to call us to come in for a gig, where we’d obviously get noticed by a major record exec and/or Dave Grohl and blow up over night. That’s pretty much how I envisioned my career as a musician going on a daily basis.

This is a lot like stupid, dumb, work, like the kind of work we got into music to avoid in the first place!

Not ever, not once, not in a million years, would I have thought back then that I would spend a countless amount of hours on an unhealthy daily basis sitting on something, that would eventually come to be known as “the internet” doing something that would be called “social networking.”

I would like to go on record and state that, with every fiber of my being, I vehemently HATE social networking. I hate it. I hated MySpace. I hate Facebook. I hate Google+. I hate Tumblr. I hate Twitter. I hate Pintrest. I hate Instagram. And God help your mortal soul if you so much as THINK about sending me something on frikkin LinkedIn. Unfortunately for myself, and hard working musicians everywhere, the fantasy of being discovered overnight came and went with my TMNT feetie pajamas as did almost the entirety of what I once (thought I) knew of the music industry.

Social media is probably the most important tool you have in your arsenal for pushing forward as an independent artist. I could probably ramble for hours and hours about methods I use and fall backs I’ve found, but I’ll try to keep this quick…partly so I don’t bore you, but mostly because I NEED TO GET BACK ON FACEBOOK STAT!!!

I remember when MySpace first came about. It was just like this realization of “Holy S#$t!!! We don’t HAVE to just (just being the operative word) go walk around on the streets handing out flyers, or going to our friends parties to promote…we can promote ONLINE!!!” There became this immediate awareness of how important this method would be. Our page HAD to look awesome; it HAD to have tons of plays everyday; it HAD to be better and more fun and more exciting than the other bands in our market. Another thing that became immediately apparent was: This is a lot of stupid, dumb, work, like the kind of work we got into music to avoid in the first place!!!

There became clear lines drawn among band members—those like myself, who stepped up to the social networking plate to log COUNTLESS hours slaving over a keyboard, and those who said “that s#$t is f#$##g stupid and I’m not doing it.” Social networking is an insatiable amount of work, so it is important to make sure it is evenly distributed among your band members to keep one person from getting burnt out on it and to keep your social network momentum strong.

As the years have come and gone and social networking has grown into the obnoxious and large monster that it is, organization is key. Facebook, in my world, is still king. For now, that is… Aside from the band page, which we’re constantly loading up with “engaging content,” I use my personal page as my strongest promotional tool. Organization could not be more important to me in this respect since I have something like 2000+ friends (brushes shoulders off, in ultra pimp{nerd} fashion).

As the band began to tour, we began collecting emails and names from our mailing list (as you do on tour, or SHOULD do). I would then hunt these emails down on Facebook and add them to my personal account. Before long things became unmanageable. When it came time for a tour, I didn’t know who the heck any of these people were, or where they lived. So I sat down and started spending HOURS organizing my friends into “lists” (Facebook, and other networking sites of the like, will let you organize your friends into lists) according to geographical location (i.e. Los Angeles area, Ventura California area, Cedar City Utah, Springdale Utah, Philadelphia, NYC, etc. etc. etc.). This took FRIGGIN FOREVER!!! But the payoff was huge. I didn’t have to play a guessing game anymore when it came time to promote and I could more effectively present the illusion of personal contact through social media. Now I can simply open a tab on my browser and navigate to view the entire list of the area we’re headed, open a new tab and start sending personal messages one by one.

Yes…I actually do that. I USED to play guitar…now I send quasi generic, but personal enough sounding messages on Facebook…at least that’s how it can feel when I’m in the thick of it (which is more often than not). It is ALL ABOUT presenting the illusion of being personal to be effective. It just takes entirely too much time to ACTUALLY write a personal message for each person on a list in a certain area, so I typically will come up with a boiler plate like below:

“[insert a greeting with the person’s name, sometimes include a specific sentence to go along with the greeting, giving the impression this isn’t just a copy/pasted message, maybe something about their dog, or the band they’re in, or that friend you both secretly hate…be creative] Well, I just wanted to give you the heads up that we’re going to be pulling through town next month on Saturday 8/31. It was such a blast last time, so I’d love to see your wonderful smiling face again! First round is on me! If you’re free it’d be great to party it up with you again! I pasted the link to our event page below so you have all the deets :) Talk to you soon dude!!! [insert link to event page]”

So I’ll just copy that whole convo with the link and send an inbox message to each person on my list, adding only a greeting with their name, maybe a personal touch sentence or two if I’m sure I’ve had personal interaction with them. I used to just blast stuff like this on everyone’s wall, but then you end up blowing up everyone’s feed. It then becomes rather transparent what you’re doing and it looks lame.

Being that specific with your demographics will be really beneficial to not pissing off your social network, which is REALLY easy to do. Event invites can really get annoying or lost in the shuffle. There’s a dude I “know” who lives in a different state from me, plays in a band and will seriously send me like 10 event invites in one day to NO PLACE EVEN REMOTELY CLOSE TO WHERE I LIVE. I mean, not even within a 3-hour plane ride to where I live. That dude annoys the CRAP out of everyone he’s in contact with. Don’t be that dude.

Social networking is all about the fine balance of being efficient, mass blasting, not annoying your fan base, and keeping your sanity.

Another important thing to remember when you’re engaging your fans on social networks is to keep it lighthearted and fun. Not EVERYTHING you post on your pages should be about what you’re currently campaigning. People should want to come to your page because it is entertaining and there’s more going on there than just HEY BUY THIS, HEY GO TO THIS SHOW, HEY VOTE FOR US!!!

Go out of your way to find links that make you laugh, or videos you find funny. Things you’d want to share with your best friends and have a good laugh over at the bar. The more entertaining content you can share, the better. Just remember that if you enjoy off-beat or “inappropriate” humor, not everyone else may share that outlook on humor with you. Use discretion so you don’t offend a would-be fan. You can then use this approach of finding common interests with your network to intertwine promo for a show. Like, “Hey, check out this HILARIOUS video of this guy falling off a bar stool. Hope he shows up to our gig next week at (insert link)”…you get the idea.

Social media networking is all about the fine balance of being efficient, mass-blasting, not annoying your fan base, and keeping your sanity. If you really can’t stomach doing this work yourself and you’re in a position to pay someone to do it, consider hiring a buddy who’s hard up for work to do this crap for you for like 8 bucks an hour, or some pizza and beer. It’s super easy to sit them down at your lap top, create the template for them, show them what to do, and go back to what we all came here to do—playing your instrument!!!

Just remember to put DOWN social media once in a while. Have a strong smart phone, so you’re always connected on the go, but GET OUT THERE!! Go to shows, make phone calls, meet people face-to-face and hand out flyers. That type of interaction makes all the difference in the world. In the meantime, I’ll catch ya on the feeds. ;)