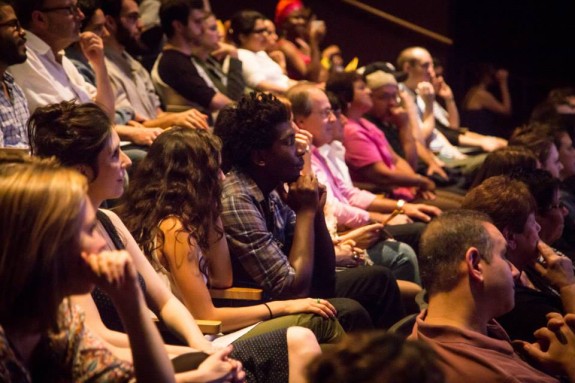 Pick Your Poison night at The Pearl Theatre.

I have been pondering the idea of the modern audience. Mostly, how difficult it is in this world of internet, reality and great TV, cinema, theater, art, gaming (console and computer, thanks very much), etc., to draw people in. To make them choose you.

On top of all this, the creative industry is going nuts with changes. Netflix is rocking a new way to view. Virtual reality is gaining new life advances every day. Art forms, as we know them, are literally melding together like syrup and melted butter. This year’s New York Film Festival was focused on exploring these advances, with industry talks discussing interactive cinema, and gaming and choice linked to film, peppering the festival start. The theatrical world also seems to be taking the audience bull by the horns and swinging it around a bit. So, what does this mean for the creators?

Audiences are smart and adventurous and eager. They want to connect. They are generous if they feel taken care of.

I had THE privilege and THE pleasure of attending two very unique evenings of entertainment recently. Now, I stress these points, as not everything I/we/you see is a privilege, much less a pleasure. In the miasma that is the performance world of NYC, these jumped out—and had excellent attendance. The first was Highly Impractical Theatre’s (HIT) immersive theater performance of Chekov’s Three Sisters. It was set in an old Brooklyn church, and the audience had a large amount of freedom to move around to explore different scenes and views of the action. Each person chose the social status level of ticket they bought, and that was linked to the experience and price. I was Proletariat, i.e., not on the Guest List, and one step up from Servant. Sigh.

The Pearl Theatre Company’s Pick Your Poison nights inhabit a slightly different zone. As Ms. Gormezano puts it, “we select a theme, pick three relatively unknown plays written before 1923 that are united by that theme, and give the audience a chance to select the show they want to see that night.” It’s classical theater with a twist. The performances are script-in-hand readings, but the acting and vibe was shockingly superb. The audience voted on which one we wanted to see more of by blindfolding a volunteer, who then decides which one received the most cheers. Very Official.

After having my skirt blown up by the air of quality inventiveness (or perhaps crappy weather), I just had to get these astute, imaginative ladies’ opinions. But first, here are a couple commonalities that jumped out to me about these evenings.

Live Music: At both, playing before the PYP show, during TS.

Audience Choice: They gave us lots.

Ashlee Renz-Hotz: Jessi, how did the Pick Your Poison idea initially come about? What was the inspiration behind it?

Jessi Blue Gormzano: Two years ago, in preparation for my interview at The Pearl Theatre Company, I sat down and tried to figure out an idea for artistic programming that would appeal to a younger and more diverse audience. The Pearl, like many theaters in the country, is tasked with the goal of continuing to engage its audience base while appealing to a new generation of theatergoers.

I thought about the kind of programming I love—I’m addicted to This American Life. This addiction actually inspired me to create OUR BAR [with Project: Theater], a site-specific monthly show that produces scenes written around a theme (à la This American Life). OUR BAR has no fourth wall and puts the audience right at the heart of the action. Sometimes the audience is even an actor’s scene partner. This direct contact is thrilling and holds the potential for the unrehearsed/unknown and adds an electricity to every show.

When you walk into The Pearl Theatre, most people don’t expect to be handed a free can of Sixpoint beer and then see a trio of sweaty bluegrass musicians stomping and singing their guts out on the stage before a staged reading. It’s a little bit insane, but I think that’s what makes it so fun to watch. Performers attempting the impossible—giving full-body performances (with scripts in their hands) of a play that an audience voted to see via boisterous hootin’ and hollerin’.

How about you, Elana? Why do you define the type of performances that HIT does as “impractical”?

Elana McKelahan: We are interested in immersive, experiential storytelling that invites the audience on an adventure rather than giving them a dark place to passively sit and watch. As you might imagine, this type of performance has a lot of moving parts, and, at least to my knowledge, there aren’t many established ways of creating this type of work. Some companies have had huge success with immersive theater: Punchdrunk, Third Rail Projects and Sojourn Theatre in the Pacific Northwest, to name a few. But “how to create a large unwieldy piece of theater in 12 rooms with simultaneous action and an ever-changing audience” isn’t exactly something you learn in a textbook.

Throw in a free can of craft beer from a Brooklyn brewery and now there’s a pretty good chance I will close my laptop and get my butt off the couch.

Theater in its nature is an impractical art form. In an age of mass-produced and widely distributed entertainment, theater is ephemeral and limited. It changes every night. It takes a village to create and is expensive to sustain. The “success” or “failure” of a project is extremely subjective. An actual living-wage career in the arts is extremely difficult to build without being born into a show biz family or having a benefactor or trust fund to fall back on.

I am not blind to these realities, nor do I think that I alone will be able to address them, but I am passionately committed to trying. There is a huge, adventuresome audience out there hungry for meaningful experiences. It is impractical to think that we can tap into this hunger and do so ethically, with a commitment to taking care of our collaborators, while pushing ourselves to create big, ambitious, messy, beautiful productions. And that is exciting to me.

In your work, what is something you have found to be true of today’s audiences?

EM: They are smart and adventurous and eager. They want to connect. They are generous if they feel taken care of. They crave rules. Audiences today want to be empowered. They want to be challenged and engaged. If they are bored, you probably aren’t doing a good enough job of engaging them.

They don’t need to be babied, but they do need to be invited. A lot of my process is figuring out how to invite audience members to actively engage with the play, while giving them freedom and agency when appropriate.

JBG: We want to be viscerally involved. Theater has to offer something that Netflix doesn’t. Because the lure of the couch and binge watching the new season of Orange Is the New Black is VERY strong, how do I, as a producer, help create an experience that is vastly different from the one you could experience in your living room?

Additionally, we want a good deal! As an audience member, I want it to be a no-brainer that I am getting a fabulous deal—high quality theater at a very affordable price…throw in a free can of craft beer from a Brooklyn brewery and now there’s a pretty good chance I will close my laptop and get my butt off the couch. 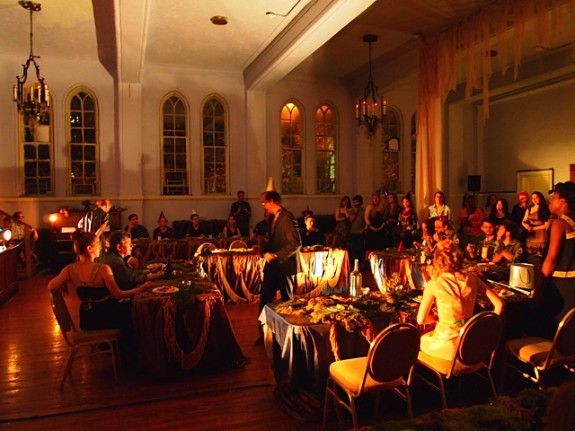 What is your prediction (or hope!) for the direction of live performance in the near future?

EM: I think we will see much more immersive theater in the future. I especially hope to see plays that are written to be performed immersively. I love working on new plays and am overjoyed to encounter playwrights who are thinking as much about space as they are thinking about character and plot trajectories.

Fantastic! If you could give a piece of advice to upcoming/current professionals that you have learned through your own discovery, what would it be?

EM: Create, create, create. Put the work in. Seriously. Do you have an idea but aren’t sure if it will work out in performance? Try it out. There are a lot of people with a lot of experience who will tell you that something will or won’t work. And that’s fine. But do it anyway.

I am giving this advice to myself most of all because I struggle with a fear of failure just like anybody else. I am a perfectionist. I am constantly having to come to terms with the fact that I create extremely imperfect productions, and feel a huge sense of responsibility when directing a show. But if you create anything in your life, there will be beautiful aspects of it and shitty aspects of it, and the worst possible thing that can happen is that the shitty aspects mute you. Let them fuel you to create even shittier and more beautiful work and to share it all with the world.

The next Pick Your Poison night is Sunday, November 23 in NYC, and the next OUR BAR is on Wednesday, December 3 at Failte Irish Whiskey Bar. We highly anticipate HIT’s next production.