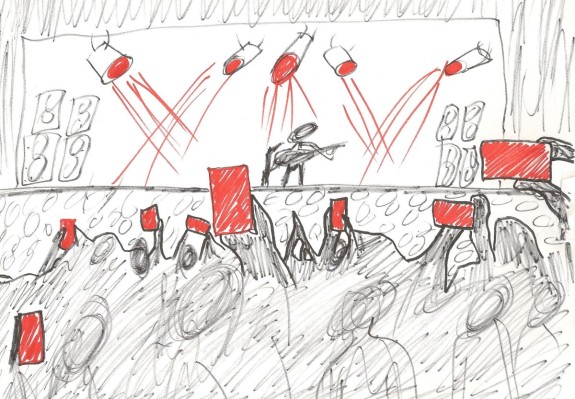 I’m just here for the shot. Illustration by Billy McCall.

A month ago I was watching TV and I saw a commercial for some new phone. As hip music played in the background, a montage of visuals rolled through, demonstrating all the ways in which a person’s life would be improved if they were to buy this particular phone. We’ve all seen such commercials; standard operating procedure.

One scene in particular caught my attention and stuck with me. A crowded arena full of concert-goers held their phones in the air, snapping photos of a faraway musician rocking out on stage. Hundreds of fictional douchebags snapping shots of what was undoubtedly the best concert they’d ever attended.

Sometimes it’s better to live in the moment than to capture it.

That image, that notion, infuriated me.

I’m pretty sure my rage stems from the resentment I feel towards technology and those who possess it. See, I’ve been taking photos for a long time. In grade school I ran around with a little 110 camera, and quickly learned it was really only useful with the natural light of outdoor settings. By middle school, I had acquired a 35mm, which meant I now had flashbulbs and could shoot pictures indoors. During my high school years, I moved on to video, taking my little VHS-C camera with me everywhere I went. And I do mean everywhere. Of course, VHS-C won’t play in a VCR, so I learned how to transfer all my home movies to standard VHS.

My love of capturing images went on like this. I have owned so many different cameras and camcorders over the years; I have boxes of photos and video tapes.

But then computers. And internet. And digital.

In the beginning, hardcore photographers laughed it off. Scoffed even. Digital was shit. Who cares? But the technology kept getting better. Digital images started looking good. Digital printouts started looking good. Using actual film started to seem…silly. Now any dumbass with a phone can take a pretty good-looking picture. You used to have to go to school to learn that.

So now everyone’s a photographer. Whether for documentation or art. We’re all snapping photos of everything, from our food, to our friends, to our concerts. Is that why that commercial upset me? Because photography is no longer a quirky hobby that “artists” pursue, but instead an expected part of daily life? I’m sure that’s part of it, but there’s more.

I got to thinking about our brains, as a society. Our brains, and our process. As we become more and more entwined with internet culture, we also become more and more detached from real life. We are more excited about emails than conversations. We would rather peruse random videos from all over the world than enjoy a single experience from the real world. I’m a part of this as well, so I’m not judging.

I can understand wanting to capture the moment. I’ve done it for years. But as someone who has done a lot of band photography, let me explain something. Taking pictures at a show is so different than simply being at the show. Holding a camera changes how you act and react. You become so concerned with getting that one shot that you miss out on the essence of the overall experience. Which is why that commercial bummed me out. There used to be a roomful of people loving the band, and one or two photographers taking pictures. Now everyone takes pictures, and who is really enjoying the show? It’s not real; it’s not pure.

So I put down my camera. I haven’t taken any pictures in a month. When I see some great graffiti, I have to stop, look, and remember. When I go to a show, I close my eyes and really listen to the music. When something hilarious happens, I just sit back and laugh, enjoying the moment. It’s made me remember how great it is to simply remember. A month without taking any photos has been a tough challenge for myself, and pretty soon I’ll be documenting the world again. But I’ll think about it a little differently. Sometimes it’s better to live in the moment than to capture it.