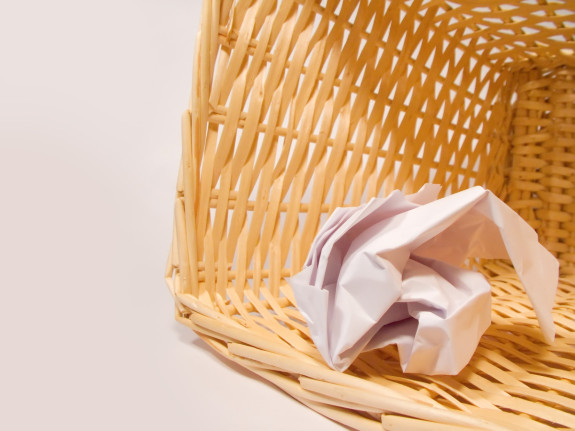 You’re full of brilliant ideas. Not all of them have come into the world as art yet; some are just bathing in their brilliance in your mind. And guess what? Someone else is manifesting one of your great ideas as art right now. They’re going to put that art out before you do, and they might execute it better than you could.

Terrifying, isn’t it? It’s enough to make you never bother creating anything again. But you shouldn’t give up. In fact, this is all the more reason to believe you can be the creative genius you hope to be.

Some say that everything’s been done before, so you might as well contribute your take on it.

I’ve gone through this over and over again and I know it’ll never stop happening: A moment puts a poem in my head, and I start playing with the language or themes, jotting down a few lines and planning to return to it later. Or I have the entire poem written, just sitting in my notebook or getting rejected from journals. Or I get enthusiastically wrapped up in a project plan, convinced I’m a genius for thinking about it in a way nobody has before.

And then I hit the internet for research, or I browse through a bookstore, or I attend a reading, and there it is—my genius idea, delivered by someone else.

Dammit, I think. Idea-jacked again. The other writer might execute their version skillfully, making me question why I ever thought I could create such a thing. Or they might do it in a way that’s wildly different from what I imagined, making me wonder if I was going about it all wrong. Similar feelings arise with the discovery of an artistic creation I wish I’d thought of: It was never my idea in the first place, but it could’ve been. Coming across Monica A. Hand’s beautiful book Me and Nina struck me with both intrigue and envy. This is fantastic, I thought. Why didn’t I think to write a book of poetry about me and Nina Simone?

Those remarkable works of art we wish we’d created aren’t so far outside our reach. In these moments our creative intuition is speaking, letting us feel our future creations at our fingertips. We could accomplish something that great, we know. We just haven’t done it yet.

So if someone else gets to your idea first, here are three ways to respond:

Give yourself a pat on the back for coming up with such an outstanding idea.

Congratulations, you can toss out any reservations you had about whether or not anyone would value your art. A version of it is right there in front of you, out in the world. And maybe it’s successful, maybe it’s appreciated, but most importantly, it exists, and someone found it worth creating.

Sit with the discomfort of knowing someone else got to it before you did, and let it light a fire under your ass.

This other artist made the work first because they simply got to it first, not because he or she was more qualified. Remember that when you’re hesitating to act on an idea due to self-doubt or lack of motivation. An idea for a poem is not a poem, and a poem sitting in my notebook is not heard as loudly as one spoken into a microphone or printed in a publication. So if I’m going to feel envy when I see a version of my idea out in the world, then I’d better get to making my own work speak out loud.

The fact that someone acted on an idea similar to yours doesn’t mean you can’t do it, too. Some say that everything’s been done before, so you might as well contribute your take on it. Don’t worry that you’ll come across as “copying” the work of the artist who acted on this idea first. You can offer your unique perspective and relationship with the focus of your piece. It’s still your idea, after all. Go ahead, create your original art like only you can.

Maisha Z. Johnson is a Bay Area-based writer, blogger and creative facilitator. As a teaching artist and the founder of Inkblot Arts, a writing and editing support and group facilitation project, Maisha promotes literacy, healing, and positive change through artistic self-expression. She has an MFA in Poetry from Pacific University, where she got to work with some of her literary heroes including Kwame Dawes and Ellen Bass, and a BA in English with a Creative Writing emphasis from San Francisco State University. She also works as a creative facilitator with ArtCorps, providing training, coaching, and consulting to provide leaders and organizations with creative methods and skills to harness art and culture as tools for community development.Maisha frequently performs and publishes her poetry, and through her writing, she shares her secrets for wrangling the obstacles of self-doubt and the impact of trauma. She also writes too many poems about her cat, and blogs regularly about the relationship between writing and social change.