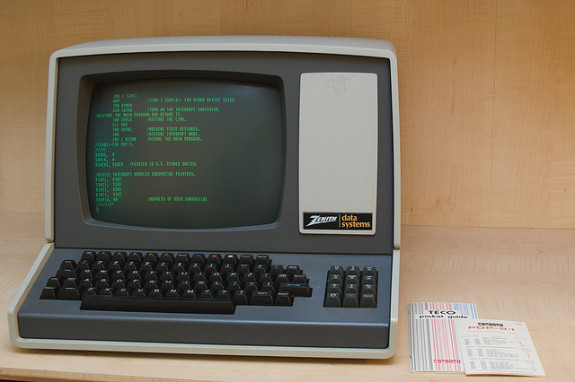 Don’t let your music files become as outdated as this serial terminal. Photo by ajmexico.

When it comes to backup, the simplest and most universal is going to be the most future proof. I’ve been doing this long enough to be burned a few times even after a just a couple of years—can you imagine if someone is trying to get into the files 50 years from now? I mostly use Digital Performer and Pro Tools, but the following applies to any DAW.

I’d say a folder of individual WAV files (& also optionally hi-qual converted 320 mp3s), with a text file info/tracksheet would be the most generic. Also making formatting the back up drive to FAT32 to make it PC/MAC cross-compatible.

Also if you have any soft synth midi tracks, it’s best to freeze or bounce them to audio tracks.

I learned years ago when I couldn’t get back into some Retrospect archived CDs that anything that requires a certain program is future risky for backup. As to CD data archiving I also have a lot of Jam image files (and previous to that Masterlist) which are completely useless unless I fire up an ancient MAC, so even saving a DDP file now (although I do it) makes me wonder how long they will be accessible.

Also the problem with ripping from a CD is that it includes the pause in the file, whereas the individual files are exactly just the one song without the extra silence. If you need to know the pauses, exporting as text gives that info that allows one to re-create the CD. This has come in very handy over the years as Masterlist, then Jam, then Peak have all been orphaned, but my text files from them are still useable.

This also relates to archiving multitracks from any DAW, which from my experience few people do. When finished, it’s best to duplicate the take (“playlist” in ProTools—to maintain a “liquid” version with the edits), then merge (“consolidate” in ProTools) all tracks into fresh tracks to start together (and of course all tracks are labeled correctly, not audio 1, 2 etc.). Without doing that, what will happen in a few years is you’ll have an audio files folder full of “picture puzzle” pieces with no picture when the DAW file is too old, or orphaned, and can’t be opened. And even time stamping won’t help if audio has been moved in the editing.

Once I do the final merges, I create a folder called “audio files superceded” and move all the previous audio into that, leaving only the final keeper merges in the audio folder, this makes it much easier for someone to re-create the file in another DAW without having to fish through a bunch of files. Plus Digital Performer sees any audio in the project folder fine, no matter what folder it’s in.

It is also possible to export as OMF or AAF for cross-platform use. While this is useful, and it does maintain liquidity of edits, it also requires certain compatibilities that can be sometimes a little flaky at present, and will surely be more unreliable in future, so I would still recommend the more generic method of merge/consolidation to WAV as be the most future safe method.

Taking it one step further, I’ve found that screen shots of the important windows (in Digital Performer: tracks, mixer, markers, important customized plug-ins) archived with files are extremely helpful, it’s a generic way to get a quick look in the DAW file without having to open it.

If you utilize the comments in Digital Performer’s tracks window (notate the tempo in the conductor comments!), a screenshot of the tracks window is a quick detailed tracksheet, so you don’t need to type one up separately.

Also if you have any soft synth midi tracks, the lifespan of these instruments is much shorter than the DAW, so it’s best to freeze or bounce them to audio tracks. And exporting the file as Standard Midi File will give you a generic file of the midi data and the tempo map.