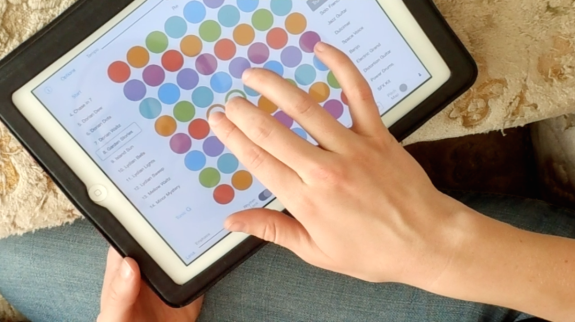 Panaiotis is an Albuquerque-based professor, musician and software developer who created the Bandojo app over the course of many, many years. How did he do it? I put him in the Burning Questions hotseat to find out.

Sage Harrington: You said in this video that the Bandojo app is something you’ve been working toward all your life. Can you talk a little bit about that?

Panaiotis: When I was a kid, I imagined having an electronic music instrument for composing and performing. I was born with arthrogryposis, a disability that affected my arms and hands, so I couldn’t study harmony on the piano. I needed technology.

I needed to expand my compositional tools to express my musical ideas.

I wanted to experiment with tunings and musical scales that acoustic instruments couldn’t play, and I had to learn computer programming so I could create a way to do it. I began creating a computer software instrument to help me study theory and compose music. That became the engine that runs Bandojo.

You’re a Research Assistant Professor in the Electrical and Computer Engineering department at the University of New Mexico. You’ve also taught music courses. What a match! It seems totally natural that you’d pair technology and music.

My undergrad, Master’s and PhD are in Music Composition, but I’ve been programming computers since high school. Programming and composition have always been my great passions. Creating a software musical instrument grew out of a need to expand my compositional tools to express my musical ideas.

Bandojo allows the player to make many musical choices with minimal motion.

Live performance is a great love of mine, and live performance electronics have been a big part of that. In the 1990s I toured around the world doing live concerts using electronic instruments, live sound processing, and computer programs that I developed myself. I recorded improvisations in unusual places like a WWI era underground cistern in Washington State, a lava cave in the Canary Islands, Limestone mines in upstate New York, and I performed a live five-hour improvisation with ten Japanese musicians and dancers at Panasonic Hall in Tokyo, Japan.

In those days being an electronic musician meant hauling heavy racks of gear across the globe; in my case, I was also the roadie. I’m enjoying doing concerts now with Bandojo—there’s a lot less equipment to carry around: just an iPad and a laptop. 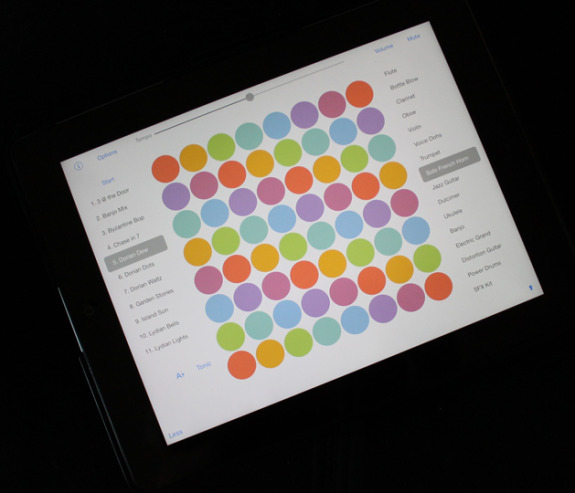 Bandojo for iOS. Courtesy of Panaiotis.

I’m a musician, so I can imagine the vast amount of work that went into creating Bandojo’s melody and accompaniment, but I haven’t the faintest clue how one would go about creating an interface for such a thing. How did you do the actual technical work of creating the app?

I did the technical work by sitting in front of my computer and programming for many years. Seven days a week most weeks, ten or twelve or more hours a day, most days. Ask my wife!

I have been developing the underlying software for over 20 years.

Bandojo is a version of the music software I created for my own use. It was inspired by a concert I did with a group of performers who had a variety of physical abilities, movement challenges, and levels of musical experience. I had to create an interface that would allow each person to participate effectively as a member of a musical ensemble.

That is why Bandojo allows the player to make many musical choices with minimal motion. This is helpful for people without much musical experience, with or without mobility limitations. I designed the desktop version to be used with any input device, including head and eye control. The interface is clickless—all the user has to do is hover the pointer over his or her choices. This means that the entire program can even be controlled and played by a quadriplegic with only head movement or just eye gaze.

I created a user interface for the Mac, and then Andrew Stone did most of the interface coding for the iPad and iPhone. He was also critical in integrating my code onto the iOS platform.

Panaiotis performs music he composed on the software he created: BandojoPlus.

Did you bring a team of programmers together to create the Bandojo app?

While I’m the original creator of the software for Bandojo on the Mac platform, I’ve been very fortunate to work with some very talented people on porting it to the iOS platform (iPhone, iPad, and iPod Touch) and the Windows platform.

I met Andrew Stone at an iOS app development workshop. Andrew worked with Steve Jobs on the Next Computer and then with Apple, and he currently mentors iOS developers in Albuquerque through this workshop, which is held at the co-working space, Ideas and Coffee. Together we created a version of Bandojo that is not only a stand-alone musical instrument, but also can be used as a controller for BandojoPlus, the Mac and PC version.

We’re planning to develop interfaces for adults and children with special needs.

It was also at the iOS workshops that I met Lisa Maynes, who has been instrumental in porting the code to the Windows platform and who helped further the design to open up the interactive interface to a wider audience.

I’ve made a lot of connections through personal introductions. Brian Stinar was one. He helped with the Windows port by setting up an appropriate development environment and addressing a few platform-specific issues. 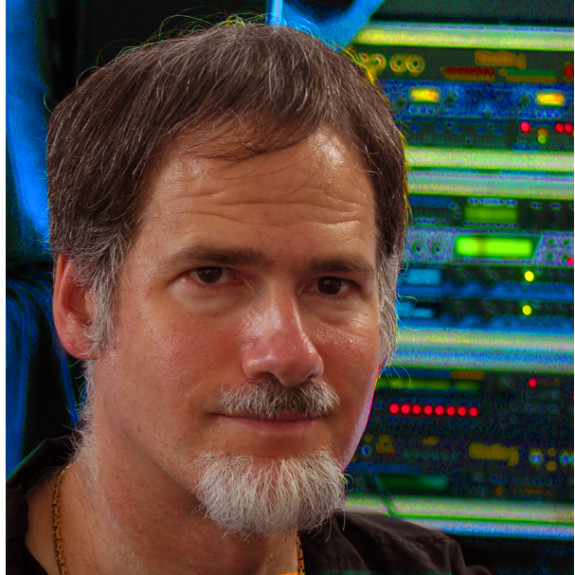 How much work did you do on your own before gathering these people to work on Bandojo?

I have been developing the underlying software on the Mac platform for over 20 years.

Before Bandojo, I worked with Victor Vergara and others on projects related to VR simulation that used the Bandojo music engine as integral components. The current team has been working with me on the Bandojo user interface and porting the software to the additional platforms—iOS and PC.

How long did you work on this particular project? Were there previous incarnations of this, or similar projects in your creative life?

I began a focused effort four years ago to create a consumer app using the software musical instrument I developed for my own use. That became Bandojo. 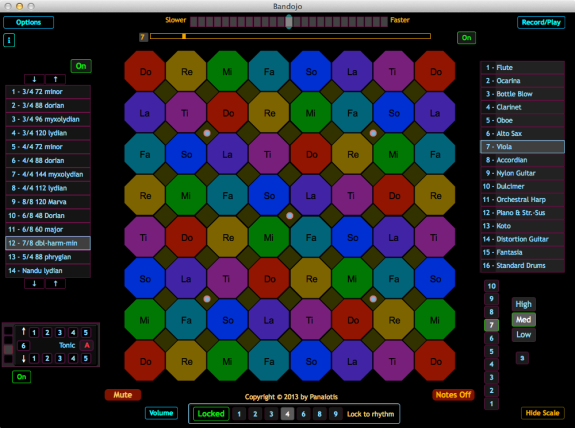 I see on Bandojo’s website that you have several updates planned for the app. Do you see the app evolving even beyond these improvements?

We have an extensive development roadmap. We’re working on material to help teachers use Bandojo in the classroom. Not just for music education, but also for coursework in the Common Core and STEM (science, technology, engineering and mathematics) for kindergarten through 5th grades. We plan to extend that into higher grade levels.

We’re also planning to create content and develop interfaces for adults and children with special needs. At the same time, we will maintain focus on the general consumer market, with different kinds of accompaniments, interactive play over the Internet, and gamification.

Check out the Bandojo app at the official Bandojo website and at the iTunes App Store.