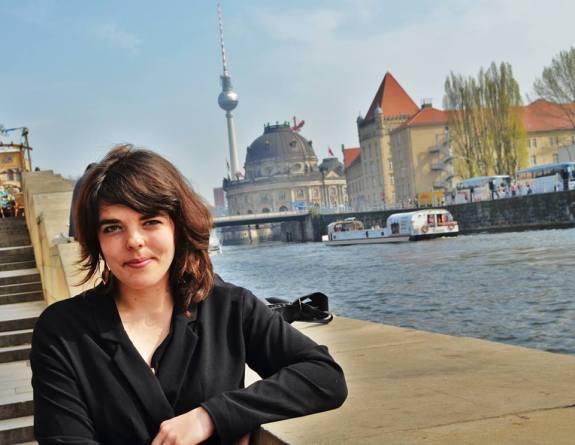 As I was taking my little worn gray planner out from my jacket pocket to write down a colleague’s email address, the guy whose information I was taking stopped and said sarcastically, “Oh, is that your smart phone?” to which I replied, “Yes, and it’s just as organized and it doesn’t crack when I drop it.” He promptly looked over my shoulder giving me a doubtful smirk upon seeing the chaotic arrangement of scribbles that dictate my day-to-day life.

Flipping through the pages, I found notes dating back to 2008, a collection of quickly jotted-down impressions of a moment; a sunset that made me feel sick; a piece of gum that stuck to my shoe and followed me around all day; a doctor’s appointment. Since I tend to recycle planners that I have failed to fill up, I often bring old books back to life and as a result seven years of my life tend to overlap into one little personal manifesto. Usually I look through these notebooks, have a laugh, and put them away on the shelf.

Since quitting my office job in July, where I felt like a piece of my soul was slowly being absorbed into my the computer screen each day, I set out to continue a project I began a year ago while working at Deskmag Magazine, researching funding for writers. My trusty gray planner was chock full of emails and references to resources for writers seeking financial support. Once a book full of (mostly) illegible writing was now a goldmine of information.

As my planner reminded me, I have applied to a lot of grants. I’ve applied to little ones, big ones, easy ones and hard ones, and I have been rejected by most of them. About a month ago, the Erasmus for Young Entrepreneurs program finally accepted me, offering me a residency in Slovenia (YES). After many celebratory drinks and a well-deserved Jerry Springer marathon, I was able to reflect on the process of applying for a grant.

In short, it’s hard. Like, really hard. In addition to the immense amount of paperwork, rules and regulations (no, you cannot buy a MacBook Pro if awarded the money, or a pair of new shoes) and proposals you have to write, you also have to take into consideration that there are a lot of other talented writers and journalists out there applying for the same grant.

While I felt bad every time my project was rejected, I kept applying. With each proposal I submitted, my work got a little bit better. My voice became clearer. I was no longer writing, “Hi, I’m Amanda and I want to change the world!” Instead I was introducing myself with confidence and a solid idea—and that goes a long way.

As I know how difficult it can be to find grants for writers, I would like to share some of my favorite platforms. Here are some grant portals that I would highly recommend, even though they will probably reject you.

Pulitzer Center: The Pulitzer Center focuses on crisis reporting, typically covering basic travel costs for international reporters. This is great resource for aspiring American writers, as stories which have not been reported in the mainstream American media tend to take precedence. The Pulitzer Center requires that you have a publishing plan ready to submit, so I highly suggest getting in touch with several magazines and pitching your idea out to them first. Once you have several letters of intent from editors, you will have a much better chance of receiving the grant. Another reason I like this grant so much is that they encourage multimedia projects, which is great if you have a collaborative plan in the works.

Beacon Reader: I launched a campaign on Beacon when my project wasn’t quite ready. While I managed to raise some money, I didn’t quite get the momentum I was hoping for, and fell short one too many dollars. That being said, I really like what they are doing, and think a well-developed project could be successful.

Beacon works like a crowdfunding platform specifically catered to writers. The platform directly connects writers to their readers, who can contribute a one-time donation to their project. Beacon also offers the option for donors to give a rolling amount (meaning you get that amount every month for a determined period of time), which could be used to pay some bills and focus on your work.

Journalism grants: I have considered applying to “The Innovation in Development Reporting Grant Programme” a couple of times, and was dissuaded because I did not have a letter of intent at the time. I recently realized that you do not necessarily need a letter unless you are shortlisted. Lesson learned: Always read the FAQ. What makes this grant so special is that it provides substantial funding (it’s backed by the Bill and Melinda Gates Foundation) for journalists who are looking to take a creative and experimental approach within their work. This grant tends to focus on international development projects, and raising awareness on a global level.

Open Society Fellowship: The holy grail of all grants! The Open Society Foundation has been dedicated to the promotion of democratic governance, social reform, and human rights since my favorite philanthropist George Soros founded it in 1993. The OSF is a grant-making platform that has funded a multitude of amazing projects, ranging from transparent journalism to innumerable civil society groups. So, if you have a larger project that fits into on of these categories (education, health, rights and justice, all those good things people are continually denied across the globe), the OSF is the grant that you have been waiting for all your life. I applied for an OSF grant last year, hoping to be the winner of a whopping 80,000 USD, but alas, no cigar. But, I do plan to apply again…one day.

So while I am not saying quit your day job literally (at least not just yet) what I am saying is that there are people out there who are willing to fund your work. It just takes time. Although I am new to this whole process, I believe that once you get familiar with the world of grant proposals and constantly begging for money, you can make some valuable connections and the knowledge you gain is priceless. But that’s just what I think. I very well might be out on the street come the end of my residency in Slovenia.