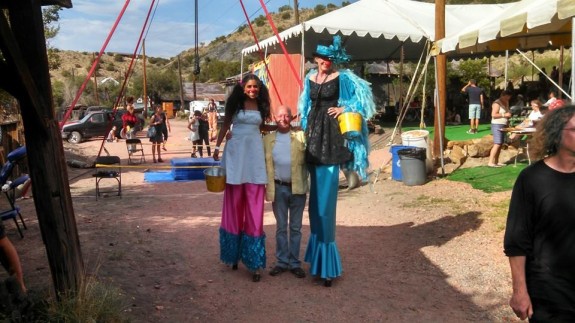 Deirdre Africa and I stiltwalking at a benefit event for Kelly McDowell, Wise Fool NM teacher and performer, in July 2014. The event was in part a fundraiser to help with Kelly’s expenses as a result of major illness. Courtesy of Veena Vasista.

I just returned to living in the USA, my home country, after 20 years of living in England. I moved from one of the most expensive cities (London) in the world to what is considered the sixth “poorest” state in the USA (New Mexico—this claim to fame is based on median household income; in so many other ways I think it is a very rich state!).

I insist on being a freelancer because I want flexibility to spend chunks of time away from my base. I want this freedom to work in different places. I want this freedom to to spend time with and support my elderly parents. I want this freedom to travel. A job where I’m an employee doesn’t afford that flexibility. Thing is, a job does—ideally—cover health insurance. In England, I had the National Health Service to look after me. (I did eventually acquire British citizenship, but the benefits of the National Health Service are not tied to citizenship.) When I embarked on being freelance in 2008, I didn’t have to think about access to healthcare as an issue tied to how much work I didn’t or didn’t have on the books.

Welcome back to the USA, Veena!

I’m determined to keep navigating through the ups and downs of the freelance life.

Yes, yes, I have acquired insurance through the Affordable Care Act. The legislation has made it affordable to me through tax credits. Still, the affordability of my plan ($0 deductible, $500 cap on out of pocket costs) is only because I earn so very little. My focus right now is an unfunded labor of love, writing a book about Wise Fool New Mexico and the Peñasco Theatre Collective. Just one solid contract for a few months could raise my monthly payment, the deductible and the out of pocket costs by a significant amount.

I would have to earn quite a bit to feel financially secure under these circumstances. Because I’ve seen how it works. I’ve seen a friend literally get hit by a truck and end up $7,000 in debt from medical expenses despite having a plan through the Affordable Care Act. I’m also watching her raise money to cover treatments not covered by her insurance.

Then of course, there’s complexity that is the insurance system. The system, as far as I can tell, is trying to fleece me however it can! But this isn’t unique to being freelance, so I’ll save that rant for elsewhere. What I am finding is that I sometimes feel some anxiety around this aspect of my life. It isn’t that I used to go to the doctor a lot in the UK, but when I did, I didn’t have to think about the costs.

Is it free healthcare? No, that’s a misnomer. UK residents pay through our taxes. I paid through taxes. How is it different? Well, let me put it this way. In 2003, I was in an accident and broke my back. I was airlifted to hospital. I was in hospital for 10 days and had spinal surgery. I had physiotherapy afterwards. Fourteen months later, I had another spinal surgery.

Throughout all this, I never saw a bill to do with my healthcare.

The other day I started thinking I might set myself up as a freelancer who supports people to navigate their health insurance plan—keep up with the paperwork, write appeal letters, etc.

That is an advantage of being a freelancer, I guess. Well, one who also doesn’t have children or other dependents. I have the time and flexibility to spend hours on the phone sorting stuff like this out. I’m not trying to talk to my insurance provider’s customer service division while on a 10-minute coffee break during a work shift. (I honestly don’t know how people do it! Well, I do know—they don’t. Many don’t even try to make sense of their health insurance. Many just pay the bills they get sent—even if it means borrowing money or putting the payment on a high interest rate credit card.)

Over the years, while living in England, I used to hear about talk from people in the USA about staying in jobs or taking jobs when they really want to be self-employed. They do this, I was told, because of health insurance coverage. “Poor them,” I used to think.

Thing is, I’m determined to keep navigating through the ups and downs of the freelance life. If I can create a sustainable living from self-employment, I keep thinking, I can have such a rich life of being in service to my family, traveling, creating work that inspires me, and experimenting with giving life to love, beauty and play.

Ahh, yes, That’s right. That’s why I’m leading this rather unconventional life. Sometimes I forget—amidst challenges such as health insurance coverage. For me, this living a self-employed life is something I am choosing to do as part of my commitment to step more deeply into a life’s purpose of love, beauty and play.

Veena was born in the suburbs of Chicago and fled as soon as she could. She ended up, at age 23 living in England. Until last year, this was her home—most of that time in east London. Since September 2013, she has been based in Santa Fe. She sometimes calls herself a “recovering social policy professional”—she’s been a campaigner, a think tank researcher and—gulp—a policy advisor in the British government.

Her speciality was embedding human rights and equal opportunities principles into public policy.

In 2010, after publishing a piece for a think tank, she fell apart in many different ways. Unlike Humpty, she managed to put herself back together again. She is now intent on cultivating Beloved Community through her skills as a writer, a facilitator-mediator and a theatrical clown.

She bears witness, she listens, sees, connects and crafts stories. In doing so she aspires to support people in linking up soul work with collective creativity to dismantle oppressive and toxic political, economic and social systems and build liberating and restorative ones in their place.

If you would like to know more about her walking out of the Social Policy Industry, check out [R]evolution Road—traveling the terrains of creativity, power and love.

Veena also practices the art of theatrical clowning. Her clown is called Matilda. Matilda loves inspiring people to feel what they feel and embrace our vulnerability. She reckons that to be human is to be vulnerable.

Veena is currently writing a book—A Balancing Act: Performing Arts and [R]evolution with Wise Fool. As a freelancer, she can be hired to facilitate dialogue and reflection, to mediate conflict, to write insightfully about an organization’s work and to perform Matilda as a light hearted way to step into serious conversations about sensitive issues.

View all posts by Veena Vasista →