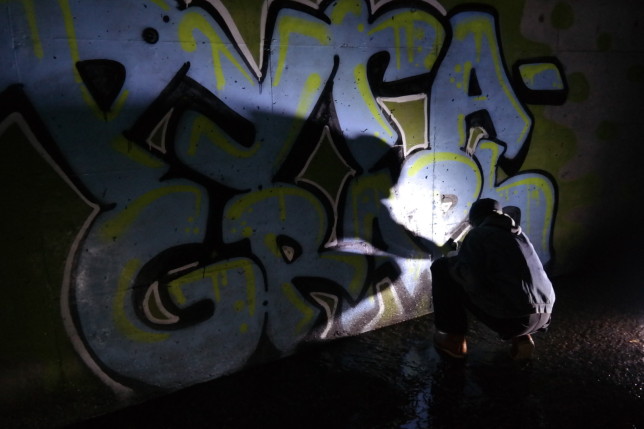 The thing most people don’t realize about New Mexico is that it actually gets pretty cold out here. We don’t get the piles of snow like they do out east, nor do we get the weeks upon weeks of sub-zero weather like they do up north, but it does get cold. Desert life is all about whether or not you can see the sun. Day time feels great, but at night the temperature drops fast.

The temperature was right around 30 degrees Fahrenheit last week as I followed two new friends down an arroyo and back into a tunnel. They had told me to wear boots, as the cold temps were not quite enough to freeze the moving water as it made its way from the Sandia Mountains down past the city of Albuquerque and into the Rio Grande. There was no ice, but our feet slid around just the same. Just under the trickle of water was a thin layer of moss, slime, and sludge coating the floor of the tunnel. A combination none of us wanted to fall into.

Coordinating one’s mind and body is a lifelong exercise for musicians, athletes, or anyone else.

I met the young graffiti artist at a party a few months back, only I didn’t know he was a graffiti artist. We gradually became friends, shared stories, shared art, and eventually he revealed his secret life to me. He’s one of those kids who runs around town late at night, painting his tag-name on shit that doesn’t belong to him. If I told you what that name was, there’s a good chance the locals here in Albuquerque would recognize it. I usually smile when I see his name around town, not that I endorse everything he paints, but you don’t have to love every single thing an artist does to still love and respect the artist themselves. In the weeks leading up to our night in the tunnel, he asked that I keep both his real name and his art name a secret. The subculture of graffiti is a fine line, a balance between fame and anonymity. The two forces work inversely against one another, and the more known a name becomes the more the artist behind it is forced to hide.

And what about my other friend? She’s a photographer who goes by the name, “Marigoldz.” She is well-known amongst local graffiti artists; her flickr page is loaded with pictures from train yards and abandoned buildings. When we asked her if she wanted to crawl down into some dark, dank, deserted tunnel, she seemed enthusiastic about the idea. 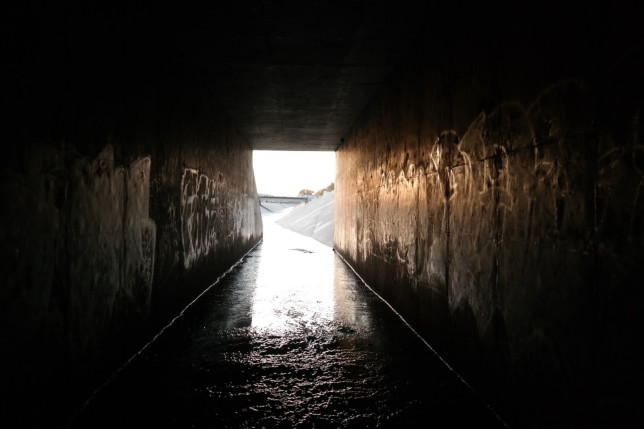 The last rays of light, as the sun sets and we make our way into the tunnel.

The tunnel we entered was about six feet wide and about twelve feet tall. A big tunnel with plenty of room. I’m told most other tunnels aren’t so spacious, and ducking down or even crawling back to find a spot to paint is common. Certain tunnels twist and turn, not only changing size and shape, but direction as well. Although these tunnels are mostly frequented by graffiti artists, other activities occur as well, from sex to drugs to simple exploration. It can be an intimidating environment, with very few rules and no one to enforce them if there were. I have to admit, as we took those first few steps back into the darkness, a certain anxiety began to build up, a fear of the unknown. But right along with it was that unstoppable force of human curiosity. Not knowing what’s around the corner has driven human progress for as long as humans have been around.

Despite the fact that local news runs one or two stories a year about the dangers of hanging out in tunnels, they actually provide an excellent outlet for the city’s vandals.

After 100 feet the tunnel started to curve, and pretty soon we could no longer see the entrance. No entrance meant no light, and I suddenly realized that although the darkness of night time had enveloped the city up above us, down here there was no light whatsoever. Day time or night time, it was always dark down here. We turned on our flashlights and kept going. The walls we passed were layered in one piece of graffiti after another, a seemingly infinite number of markings in all shapes and colors. It was intense to think about how many people had been down here before us, and I began to wonder if anyone was down here right now.

When we finally found a blank bit of tunnel wall, we set down our lights and set up our cameras. One camera was on a tripod, aimed at the cement canvas and programmed to take one shot every 30 seconds. I carried a handheld video camera, while Marigoldz had her camera for still shots. The two of us observed and documented while our artist friend went to work. 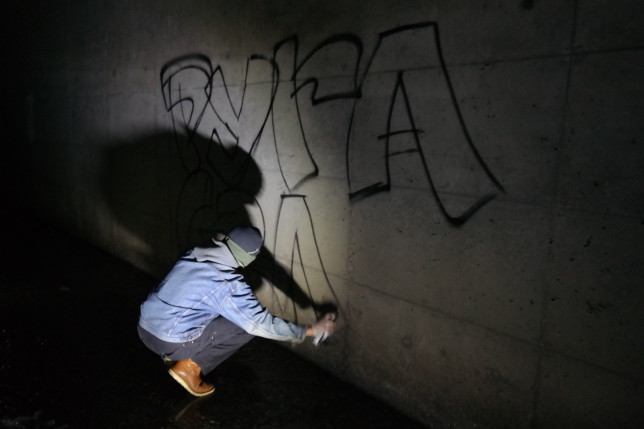 Start with a rough sketch for the piece.

He started with an outline, mapping out where he wanted each letter. As I reviewed the footage later that night, I realized this is no different than an artist sketching out ideas in pencil, only to go over them later with ink. 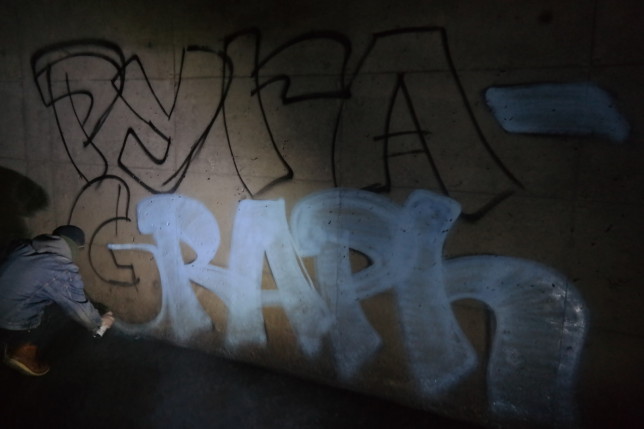 Next, fill in the letters with your main color.

After his letters were laid out, he began filling them in with the blue. His hands moved smoothly, and with confidence. He later told me that he hates almost everything he paints, and was quick to point out all the flaws in his Pyragraph piece. I recognize the same perfectionism I’ve seen in so many other artist friends, and know that this is simply what drives a good artist to get better. Coordinating one’s mind and body is a lifelong exercise for musicians, athletes, or anyone else. A graffiti artist must be able to mentally see what they want to create, then have the dexterity to actually make it happen. He tells me this is called, “can control.” When an aerosol artist is able to make the paint spray out just exactly how they want. Sometimes fat swatches of color, sometimes fine-lined details, with paint that only drips in just the right spots.

The tunnel, although fairly open, fills up with fumes and paint particles. When I get home and blow my nose, the snot is tinted blue and black, and I am suddenly aware and thankful that my intricate system of nose hairs and mucus does what it does to keep at least some of the toxins out of my lungs. This danger is one of the more subtle in the graffiti world, yet still very real, and just another example of the sacrifices graffiti artists regularly make. 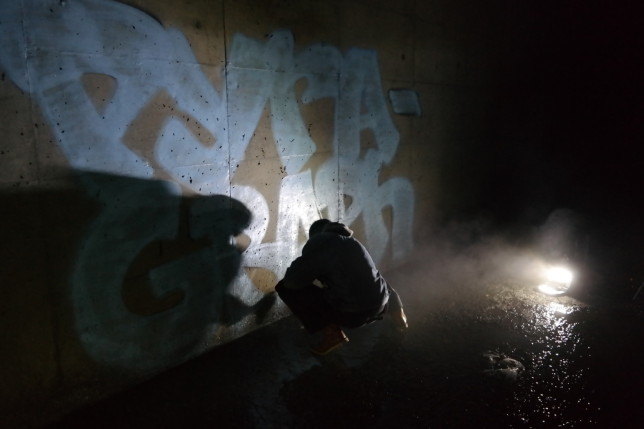 Steam coming up as the cold water splashes against the heat of our flashlight.

The air clears out a bit when he stops to rest his hands, his fingers are cramping with the cold. He opens up his back pack, then opens up a beer. He drinks about half the can in his first gulp, and begins telling stories about getting drunk and going out tagging. When I tell him that seems like a quick way to get caught, he just shrugs: “It’s just a quick way to get brave.” I can hear cars driving over top of us, and realize that I have no idea where we are. He thinks about it for a minute, then guesses which road we are most likely under. It’s a street which I drive on every time I go get groceries, and I start to realize that no matter where you go in this city, there’s probably a tunnel running underneath you. 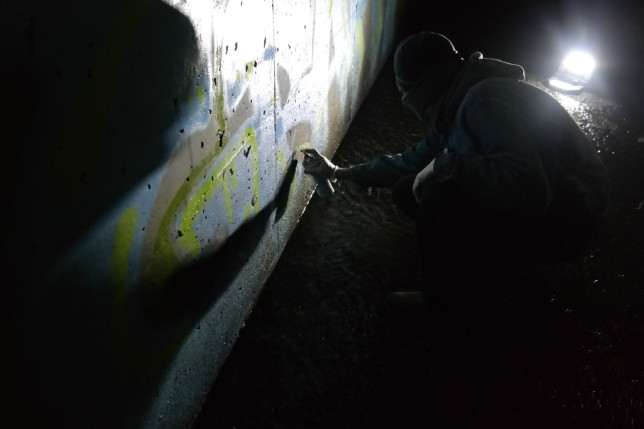 Now adding in some yellow highlights.

And despite the fact that local news runs one or two stories a year about the dangers of hanging out in tunnels, they actually provide an excellent outlet for the city’s vandals. A secret playground where they have fun doing what they do without damaging any local homes or businesses. It’s an unintentional pressure valve for illegal creativity. Few cities look so clean when you drive around the streets, and that’s probably because few cities have such a great place for artists to congregate. 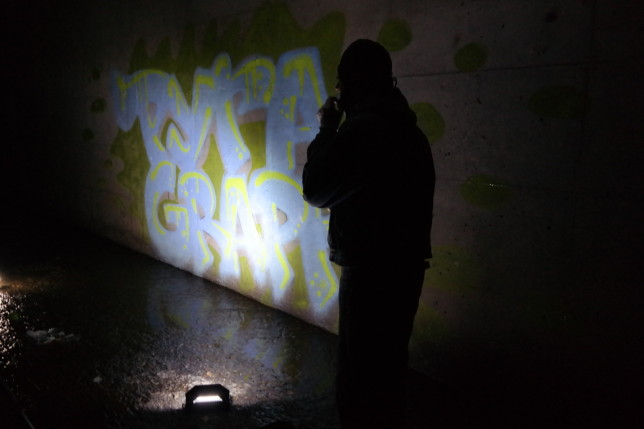 With any art piece, it’s good to take a step back and look at your work once in awhile.

After the beer is finished, he picks up a can and starts filling in all the background greens.

We snap more shots and take more video. He flares out some of the letters, “adding some flavor,” then outlines the letters in black. Adds in some drop shadows. Adds some highlights. A white outline around the entire piece. Other little stars and dots and do-dads and decorations. We take our final shots, pick up our lights, and make our way back. 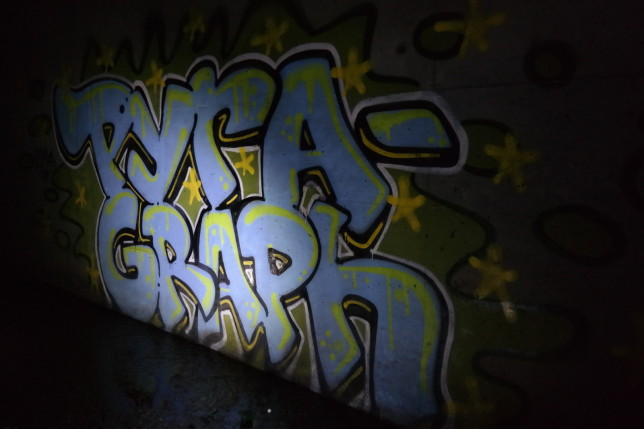 The cold air smells clean and crisp when we get out under the stars. My boots are wet, but my feet are still dry. We climb back up the embankment only to see two headlights shining straight at us. Now out in the real world, I wonder what a person might think seeing three people climb out of a ditch at this time of night. I wonder what a cop might think. I was scared and nervous when we first went into the tunnel, but after being down there for an hour it now seems safer than staring into the headlights of an unknown vehicle.

We duck down, but there’s no where to hide so we just walk further down the arroyo and climb out onto another street, throwing our bags full of evidence into a bush along the way. Better safe than sorry. We take the long way back to our car and conclude that vehicle we saw must not have seen us, whoever it was. We swing back around and grab our bags, then head home laughing.

Photos and video by Billy McCall. Music in video by Kid Static.