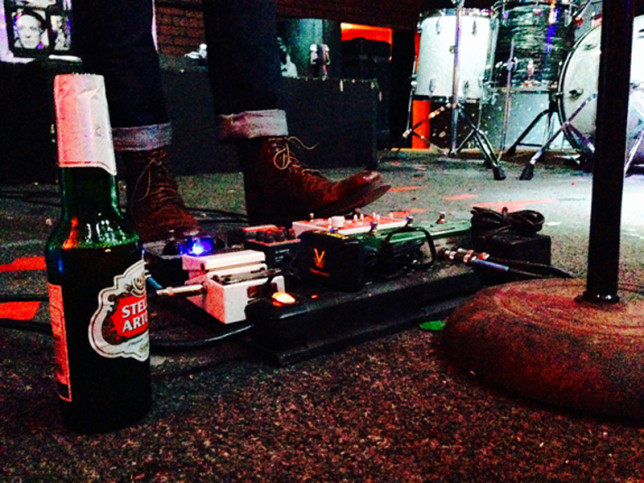 This is the first in a two-part series. Check out part two: On The Road to Moderation: How to Drink Less On Tour.

Everyone knows about artists and their bad habits—the writer with a cigarette in one hand and a tumbler of rye in the other, the rail-thin rock star and his rails of coke, the mad painter blotto on absinthe. It’s practically expected of creative types to indulge in this type of behavior, to roll around in the dirt and then tell everyone about how great/ enlightening/terrible/horrifying it was. Certainly a worn out stereotype, but who knows? Maybe a Rimbaudian derangement of the senses does make an artist into a seer. Surely Rimbaud’s spiritual progeny Alfred Jarry would find very little to recommend in moderation or abstinence—according to Jarry, “The use, and even more the abuse, of fermented beverages is what distinguishes men from beasts.”

It’s all very romantic, of course. And fun. At a very young age, I fell in love with the libertine darkness of the besotted writer, the junkie rockstar, the mad poet. I think it’s like that for a lot of creative types—cultivate a bunch of bad habits in your youth and then spend the rest of your life trying to quit them. Being a musician, I have tons of friends who’ve successfully quit smoking, drinking, and various other bad habits altogether. They tell me all the time how much better they feel, how much better life is, etc. They evangelize for abstinence and clean living, slap me on the back and say, “You can do it too!”

Drinking was the secret to dealing with this fucked up lifestyle.

Well, fuck that. To be clear, I know that substance abuse is a very real, very serious problem for many people. I’ve seen alcohol and drugs wreck the lives of close friends, and I’ve had friends die from overindulgence. I don’t want to glamorize chemical dependency. I want to present what was once a fairly acceptable response to this problem, a solution that has been pushed aside and overruled by the prevailing trend in modern times toward teetotalism. Something those bastions of civilization and democracy, the Ancient Greeks, called “moderation.” I’ll tell you about how I became the drunken archetype I fell in love with as a kid, and how I’ve managed to preserve my health, sanity, relationships, and career without eschewing alcohol entirely.

I’ve been a touring rock musician for 10 years. I hit the road when I was 24, and prior to that, I didn’t drink all that much. I got wasted at parties sometimes, and would have a beer now and then, but my alcohol intake was sporadic; I’d go weeks, sometimes months without a drink, not even on purpose. That all changed when I got in the van; suddenly, I was forced out of my comfort zone and into a strange, dirty and forbidding underworld. A transient world, a world that, to my soft, bourgeois sensibilities, seemed to have little in common with the rock and roll tour documentaries I’d devoured as a kid and more in common with what I’d read about train-hopping hoboes. I’m a nervous, high strung guy by nature, so having to deal with the vagaries of this frightening and insecure existence naturally stressed me the fuck out.

“Where are we gonna sleep tonight? Are we gonna make enough money for food and gas? Will I ever get to take a shower?” All of these questions are paramount in your mind when you’re starting out as a bottom-feeding touring band. If you’re any good and you don’t quit, the situation will improve—at least it did for me. When I look back on all the bullshit I endured on the road, however, I’m amazed I’m still doing it.

Anyway, having to put up with all of this terrifying and uncomfortable shit daily is what led to my discovery of the medicinal properties of alcohol. It’s a perk and a problem for the touring musician: booze is everywhere, and it’s free. I actually remember the night I really fell in love with drinking, and it was a rare occasion where the booze wasn’t free. I had been on the road for a week, I was a nervous wreck, and I wasn’t getting along with most of the guys in the band. We were playing 924 Gilman in Berkeley that night, a legendary all-ages venue that doesn’t serve alcohol. As luck would have it, there’s a Pyramid Brewery across the street, and to escape my bandmates for an hour or so before the show, I ducked in and ordered a beer. Then another. Then another. I realized a few things during that hour:

Total satori. Chemically induced. I had figured it out. Drinking was the secret to dealing with this fucked up lifestyle. That band broke up in Las Vegas a few nights later, and we drove the van back to Texas with our tails between our legs. It happens to a lot of bands, and for a lot of people a tour like that is a litmus test for determining whether or not being a road dog is something you really want to do. If the whole tour had been like the first week, when I was a sober, nervous kid, I probably would have said fuck it and went to grad school. A little taste of the sauce, though, and suddenly being in a touring rock band seemed like the coolest, most romantic, quixotic, and balls-out fun thing a motherfucker could possibly do. When my now-defunct band made it home, the drummer and I immediately started a new band, made a demo, booked a tour, and hit the road. I was drunk for the next 6 years.

Here’s part two: On The Road to Moderation: How to Drink Less On Tour.