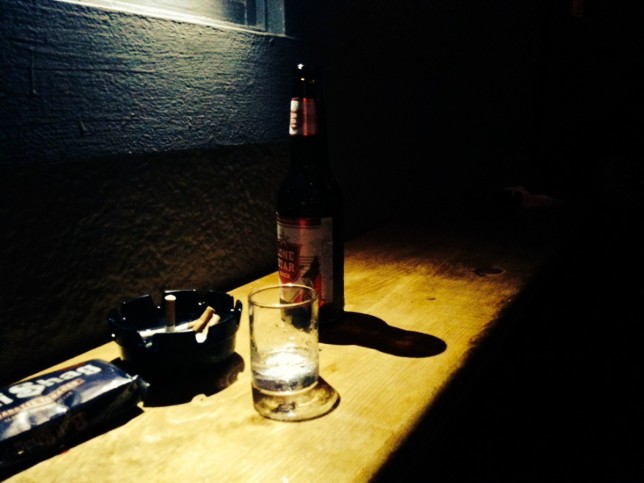 Check out part one of this two-part series: On The Road To Moderation: Why I Started Drinking On Tour.

As I’ve said before, drinking made touring tolerable and fun—an endless party. As the years of touring went on, however, I started to see the ugly side of this lifestyle amongst friends, bandmates and hangers-on. Friends missed gigs, played shitty shows, relationships deteriorated, bands broke up, people got DWIs, but I somehow luckily escaped most of this dramatic stuff unscathed. I didn’t go nuts and get in fights and cheat on my girlfriend and crash cars when I was drunk; I just got happy and stupid. When people around me stopped drinking because of the damage it was doing to their personal and professional lives, I continued along my merry way, all the while faintly feeling my physical condition deteriorate bit by bit, killing myself slowly. In those 6 years, I gained 35 pounds, had constant terrible heartburn, gastrointestinal maladies, sharp pains in my side, and I’d wake up soaked in sweat with my heart pounding. In general, I felt like I’d been hit by a truck 24 hours a day.

The moment of clarity, if you will, came one night while setting up for a show in Flagstaff, shortly after I turned 30. I could barely bend down to plug in my pedal board and my guitar felt like an anvil hanging around my neck. Shortness of breath was affecting my ability to sing and perform, every bone and muscle in my body ached, and I really didn’t feel like doing anything but sitting on a barstool. I had long ago grown accustomed to life on the road; I wasn’t that scared little kid anymore, and I decided then and there I had to stop drinking so much or I wasn’t going to physically be able to continue touring. I didn’t want to stop completely though. I have a hedonistic aversion to abstinence; I know it’s the only way some people can effectively deal with their problems, but to me it reeks of puritanism, and the anarchist in me rebels against it. I wanted to see if I could pull off moderation.

I used to “network” all night at shows, but it would quickly deteriorate from networking to partying.

“Alcoholics have no willpower” is one of the basic tenets of rehab. There is wisdom in this. Moderation, especially for the habitual drinker, is a tightrope walk; one false move and you’re back in drunken-bender-land. But if you think you’ve got willpower, and you like living on the edge and walking tightropes, here’s how I do it. These are the four methods that work best for me—they may not work for you, but hopefully they can at least inspire you to come up with your own system. One caveat: self-policing systems like this tend toward entropy—it’s behavioral science meets the Second Law of Thermodynamics.

Proceed at your own risk.

Only drink on nights when it counts

I have friends in a lot of cities that I only see when I’m on tour. When I visit these friends, I’m probably going to have some drinks. That’s what alcohol is for, right? A celebratory sacrament, to be shared among friends. When I look at my tour itinerary, I can pinpoint these nights. The corollary to this is I spend many nights on the road playing shows in cities where I know almost no one. It might be a city I’ve never played, a city where I’ve yet to develop a decent following, or any other host of reasons. On these nights, I’ll teetotal it—the only reason to drink in this situation is to alleviate boredom, and there are other ways to do that. I concentrate my energy on playing the show as well as I can, and tell myself that performing is the reason I’m on the road, not partying. Plus, doing this makes me look forward to seeing my friends. Better to show up in their city fresh and healthy than super hungover.

Two days on, one day off

When I cut back on my alcohol intake, I also started eating healthy and exercising in the morning. I bought one of those door gym things and started carrying it with me on tour. I tend to skip my morning workout if I’m hungover, and I hate doing that because I like working out; I like the routine, I like the endorphins pumping through my system at the beginning of the day, and being in shape makes loading and unloading amplifiers night after night a little easier on my back. I’m not saying exercise is the way to go for everybody—it can be writing, jogging, yoga, or bird watching. Looking forward to my morning routine the night before helps keep me from going overboard with the sauce.

Spend as little time at the venue as possible

This is one I picked up from older musicians—after load-in, I get the hell out of the bar, and go find a bookstore, record store, park etc. and relax for a few hours before the show. You can meditate, read, play acoustic guitar, whatever helps you. I try not to drink before the show, and if I do, I delay having my first drink as long as I can, like maybe 20 or 30 minutes before showtime. When I’m finished playing, I leave. The downside is that for the
sake of your career, you should probably spend at least some time at the venue making friends, contacts, and fans. I used to “network” all night at shows, but if the booze was flowing freely, it would quickly deteriorate from networking to partying, and thus wasn’t very effective. Now I reserve 30 minutes to an hour after the show for talking people up. I’m excited because I just played a show, people are excited if they liked it, and I can hock merchandise, meet people, say thank you, and explore future music career opportunities while the memory of the show is fresh on everyone’s mind. During this time, I’ll have a few drinks, and since I wasn’t at the venue drinking before the show, I’m still sober. After an hour of post-show meeting/greeting/schmoozing/carousing, I retreat.

Essentially, moderation is about constantly being mindful of your alcohol intake. I do it consciously: I ask myself, “Why am I drinking? Do I have a good reason? Have I had enough?” Drinking shouldn’t be second nature. Once you’ve managed to get a handle on the habit, you’ll feel empowered—you might even feel like an adult. And hopefully, this feeling of accomplishment will encourage you to continue on your tightrope walk.