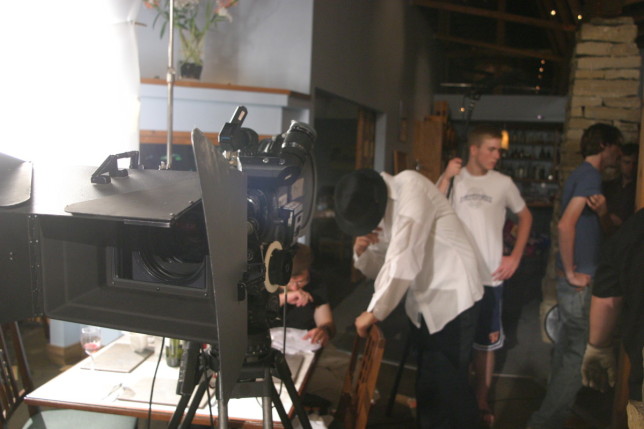 This year marked my ten-year anniversary of graduating from film school. And oh, what a different world that was!

When I graduated, I did what I imagine every film student does: I tracked down anyone I could find that was even tangentially related to the business and asked them what I should do next. Time and time again, I was told that the only thing to do was move from Kansas to New York or LA, start at the bottom, and work my way up. There was no in between, and there were no alternatives.

So, naturally, I chose the alternative.

We wrote the business plan and raised the funds one investor at a time.

One summer night, post-graduation, I sat at my keyboard and typed up a proposal and sent it off to my friend and classmate, Chris Blunk. The email was three pages long, but the gist of it was this: We will start a film production company in the middle of the country.

The initial goal of the company will be to raise money for and to produce a feature length film.

In between shooting the film, we will work on: commercials, music videos and whatever else we can find to shoot, edit, produce or cobble together to pay the bills.

If we find downtime between the feature and the paying jobs, we will refuse to sit idle. We will find some way to be productive and will use that time to write, study or hone our craft in some way. 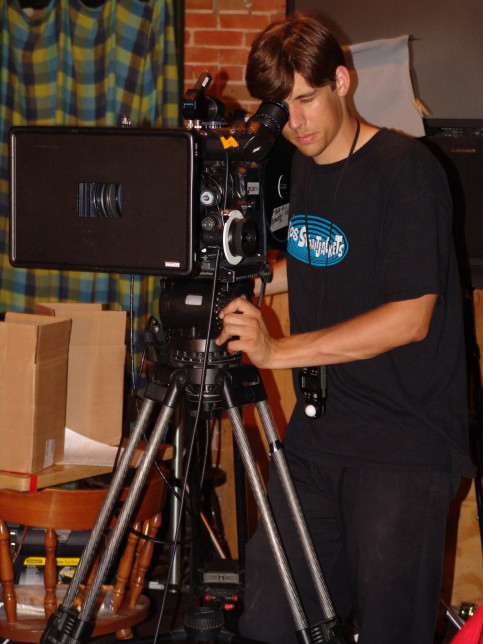 And with that email, our business was born. Within a month, we had filed the paperwork to form a limited liability company.

After writing in and crossing out hundreds of possibilities, we chose the name Through A Glass Productions, in honor of one of our favorite Ingmar Bergman movies. While the name set us apart from the likes of companies with monikers like “Corporate Film Company” or “Complete Video Works,” it also ensured that we would receive a constant supply of glass manufacturing catalogs and cold calls from windshield wholesalers in Texas.

The first real trial by fire for running our business came by actually making the movie. It took us four years. We shot it on 35mm film (when we started, HD wasn’t yet an option). We talked Kodak into donating ten-thousand feet of film to get us started, and the rest of it we shot cheaply on unused, re-canned film that we bought off bigger budget movies like Spiderman 2. We wrote the business plan and raised the funds one investor at a time. We learned: scheduling, call sheets, locations, management, payroll, turnaround, rewrites, re-shoots, location sound, post ADR, onlining and offlining, reconfirming, film festivals, film sales, agents, lawyers, contracts, etc….

As we went on, other projects started to grow bigger too, and everything we did on the movie informed our work on the commercials, music videos, and random project cobblings that paid the bills.

We finished and released that first movie, AIR: The Musical, and have now sold it for distribution in North America, China, South Africa, Australia and Taiwan.

AIR: The Musical – Feature Film Trailer from Through A Glass Productions on Vimeo.

And then, we set out to make more.

Our company has now produced six feature films, and been a part of dozens more. The movies we’ve helped to make have been to festivals like Sundance, Slamdance, Berlin, Toronto and Cannes. The experience we’ve gained through narrative film with telling stories that move people, we use for the commercials and music videos we do as well. Now, not only do those things pay our bills, but they are also a means to tell the stories we want to tell.

“This Is Where I…” – Yours Silence Kills Anti-Bullying Campaign Spot from Through A Glass Productions on Vimeo.

The industry as a whole has changed. Now film students are given a broad spectrum of possibilities. YouTube has made it so that you can create and have your work seen from anywhere. Tax incentives have lured bigger budget films away from Los Angeles and New York and moved them to states like Louisiana, Georgia, Texas, or New Mexico.

And right smack dab in the middle of the country, in a little town called Lawrence, Kansas, you’ll find Through A Glass Productions; filmmakers who are making movies, telling stories, and refusing to sit idle.

Looking back on the past ten years, it’s been a wild ride, but I wouldn’t have had it any other way.

I can’t wait to see where the next ten years will take us.