Shot a music video for the Kansas City band Shy Boys for their song new song “Life is Peachy”:

Originally posted on jeremyosbern.com. Jeremy is a cinematographer, director, and writer.

The majority of the video shows the same two and a half-ish second loop of a dental patient chasing our “crown thief,” as the camera races down eighty feet of track with the chase. Each time, one thing changes as we continue our loop, so by the end, the scenery is much different than when we started.

Director Christopher Good wanted to have a comic book feel for the project, so I wanted a consistent lighting setup throughout the dolly move, so…we built the entire lighting setup off of the dolly rig using speed rail.

Here’s a pic of me inside my dolly cage and Key Grip Chris Bradley (courtesy Emma Penrose). The whole chase portion of the video was shot in a back room at Through A Glass Productions. 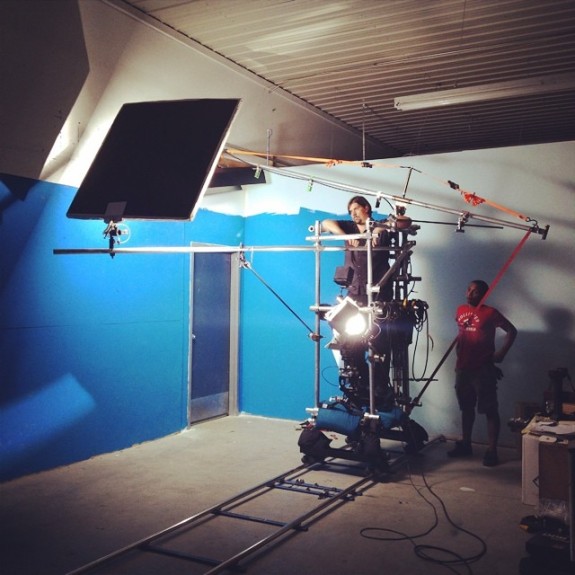 The lighting setup consisted of a 400w Joker bounced into a 4×4 Beadboard suspended off the dolly as a key light, a 12-foot menace arm rigged to hold a 4′ 4-bank kino about an inch away from the wall as a backlight, and a 2′ 4-bank kino rigged closer to camera for a fill light.

The monster rig needed two people to push the dolly for the dolly move and we gave an extra 20 feet of track just for the slow down at the end of the run. Here’s a behind-the-scenes video of one of the the takes:

Also, for you trivia buffs, that is my hand holding the polaroids, as we go through that round of changes. Really fun video to work on, and really happy with the results.