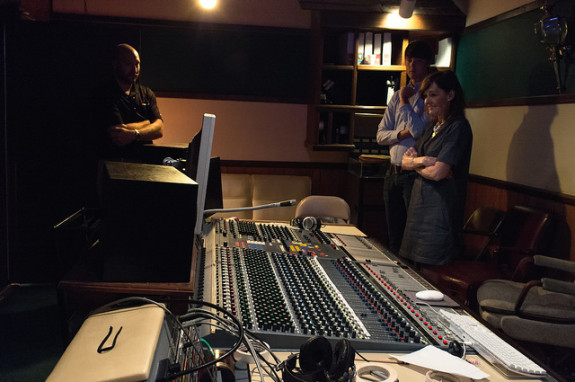 Being Clear On Who You Are: A Thought On Artist-Producer Communication

When I’m considering working with a new artist, I generally suggest that we do one song together first to see whether the relationship works. So in this spirit, last month I had a singer-songwriter come by the house. There was something in this woman’s writing and voice that really resonated with me, and that I thought I could contribute something positive to.

She came over and played me a bunch of songs, and we picked one to start with. What I typically do next is to demo up some production ideas in the computer, to get the conversation started. But before that, it’s important for me to get a sense of what the artist is hearing in their head production-wise. Especially when an artist has started a song with just an acoustic guitar, it could go in any one of a dozen directions.

Only through your fastidious curation will you end up with a record that’s the best possible representation of who you are.

So I had her play me some inspiration tracks in Spotify. I had been hearing a Beth Orton sort of thing for her material; she played me Meiko and Lucy Rose. Which, if you think about it, are pretty compatible vision-wise with my Beth Orton idea: a tightly produced balance of acoustic instruments, electronic instruments, and drum programming.

So based on that, I got started on a production template. I did an acoustic drum kit and upright bass in the verses, and then brought in some drum machines and synth bass to make a dark scene change into the choruses. Then I had the artist over to start fleshing it out.

And she hated it. Hated it! She had a viscerally negative reaction, specifically to the drum machines and synthesizers. Which, of course, were directly cued from her inspiration tracks. So I probed on that point, asking whether it was the parts the electronic instruments were doing, or perhaps the sounds I’d chosen. But no, it was the very fact of their existence. “My sound is folky-jazzy,” she said by way of explanation.

I have two thoughts here. The first one is that this artist did exactly the right thing, in that moment. If you’re an artist, and you’re working with a producer, you have to be your own best advocate. If something is happening that isn’t resonating with your vision of who you are, then it’s critically important that you speak up. Only through your fastidious curation will you end up with a record that’s the best possible representation of who you are.

My second thought is that this artist could probably have communicated way better with her inspiration tracks, which turned out to be highly misleading. It turned out that what she liked about those tracks was that the acoustic guitar was front and center, and that both singers were husky altos like her. Which is a very different story than the one I’d been ostensibly presented with, given that I specifically had asked to hear songs whose production and sound she found inspiring.

Collaboration is challenging, and fraught with the potential for misunderstanding. Therefore it’s extra important to be as clear as possible with your communication as you enter into a new creative relationship. Get your expectations and hopes clear with yourself before bringing them to someone else, communicate them unambiguously, and you’ll get started off on the right foot.