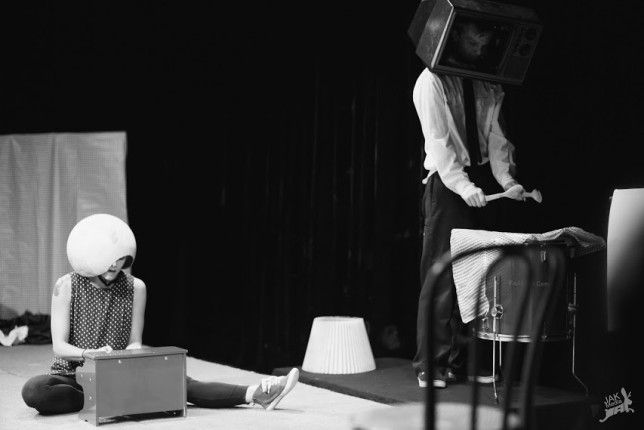 September starring and directed by Laurel Butler and Ewen Wright.

My fascination with theater stems from a single moment. When I was in college, I had a good/bad habit of attending plays on my own. I was always thrilled, despite my being an amateur audience member. One season boasted a production of The Cherry Orchard, and I attended it with as much gusto as I attended every other production. (The delivery of such gusto is as follows: I smoke a cigarette, see the show, maybe shake hands with one of the performers and tell her how moved I was, exit.) The play swept along with Russian attitude. My breath tasted like coffee and cigarettes. I was comfortable, content and pleased.

Then, in a moment of unprecedented pride, the character Yermolai violently upset a table of drinkware. The kettle, like everything else, was sent laterally through the air and quickly hit the ground, adding its monkey-cymbal note to the rest of the cacophony. But that was not it. It should have been it, but the lid of the kettle landed on its edge and began to roll downstage! The luck! The lid that did! If the play was performed two thousand times, the lid of that kettle would not do as it did, let alone do what it did next. It stopped not six inches from the edge of the stage. It did what the quarter does when you spin it on the table. It spun as long as it could, creating that round, hollow sound, playing the crickets in the moments after the charged scene.

To me, theater means more than the actors and the story and the staging. Theater means the random luck and lack thereof. The odd beauty that comes in the making of something beautiful. Those wonderful didn’t-mean-tos and the imperfections that declare perfection. Theater is painting in the rain.

To exist in the moment is to be subject to its effects—good or bad, lucky or unlucky—and no art does it better than theater. 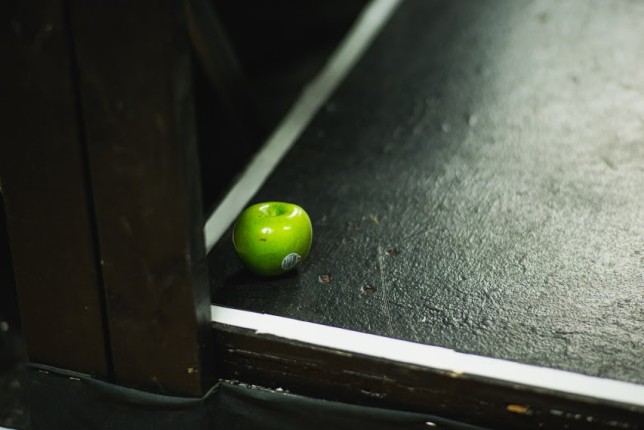 Theater a day keeps the psychiatrist away.

Currently, Revolutions International Theater Festival is taking place in the up-and-coming city of Albuquerque. It’s put on by Tricklock Company, Albuquerque’s resident clowny clowns. Revolutions is this magical sort of fog that descends every year (it’s in its 15th) and consumes the city in a theatery dew for three weeks. This year boasts 38 shows at nine venues.

The “International” aspect of the festival name is the special part; eight countries are being represented: Iran, Israel, Armenia, Ukraine, Mexico, Austria, the UK and the US. This is not a pay-to-play festival. Instead, Tricklock Company funds the entire ordeal, paying for plane tickets and visa processing fees and room and board and food and drink. The performers’ only requirements are to perform and mingle, something that Juli Hendren, the festival curator, says is lacking from other theater festivals. “Everyone has galas after the show, but it’s mostly just audience members standing around drinking wine and snacking. At Revolutions, we specifically ask that the performers come out and engage with the crowd.”

“This is my protest. So to come on this side of the border is good because we’re all the same,” said the actors from Mujeres en Ritual Danza-Teatro as I engaged with them after their show. Antígona en la Frontera is a repositioning of Greece’s Antigone into a rabbit-hole, modern world that’s a stone’s throw away from the US/Mexican border. The show was a visceral experience for me because it was in Spanish; I was washed in the emotion of it, rather than obsessing over the words, something I do with vigor. It was beautiful. 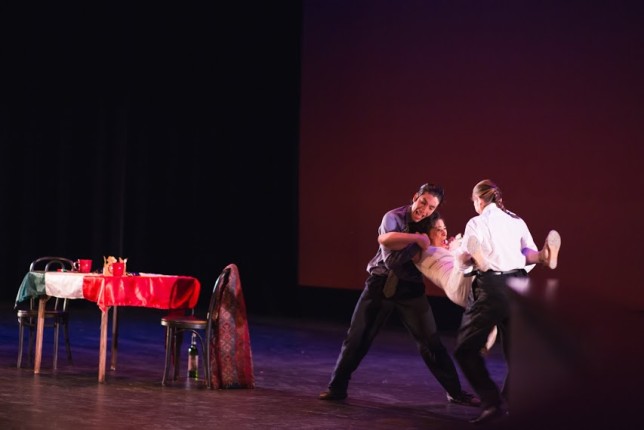 Juli told me that they could have pushed for the company to have supertitles to accompany the show (for instance, Iran’s Leev Theater will have supertitles for their retelling of Hamlet on Friday and Saturday, January 30-31), but there was something slightly exciting for Tricklock to let it happen how it was going to happen.

That’s what I’m getting at. As amazingly organized and well-oiled as Tricklock Company is during this festival, as astounding a feat it is to pull off something of this scope on their unutterable budget, Tricklock is painting in the rain.

They are letting it happen how it’s going to happen. Their willingness to forgo control when the train jumps the track is what keeps the festival apparently seamless. When a member of MIHR Theatre (Armenia) was denied a visa, MIHR said, “We’re coming anyway; we’ll just perform a different piece.” No harm done. In my eyes, the ageless resilience of theater has never been more apparent than what I have seen take place in the first week of this festival. In Tricklock’s hands, they’ve created a festival that to some degree creates itself, resulting in one of the most organic experiences my fair town has ever offered.

Hakim Bellamy sang it best on the opening night of performances, “There ain’t a problem that I can’t fix. We used to do it up in the mix.” 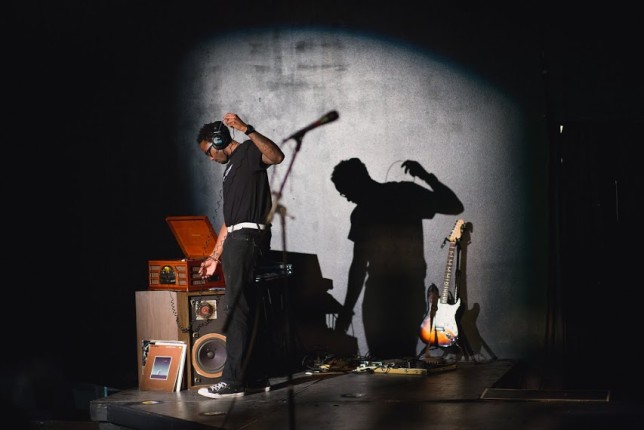 Hakim Bellamy himself, and his shadow.

The event list runs the gamut. In the first week, I saw spoken word by the ever-effervescent Urban Verbs group; I saw remarkably poised dance by MIHR Theatre; I saw a play in a foreign language; I was presented with a visual and historical display of Chicano Park, a testament to the power of cultural resoluteness in San Diego’s Barrio Logan; and I saw an stunningly orchestrated series of vignettes that simultaneously called out the impossibility and necessity of nostalgia in this device-ridden modern age (well done, Laurel and Ewen). And I didn’t even see everything.

The next two weeks are bound to be no different, no less eclectic, and nothing like you’ve ever imagined theater could be. 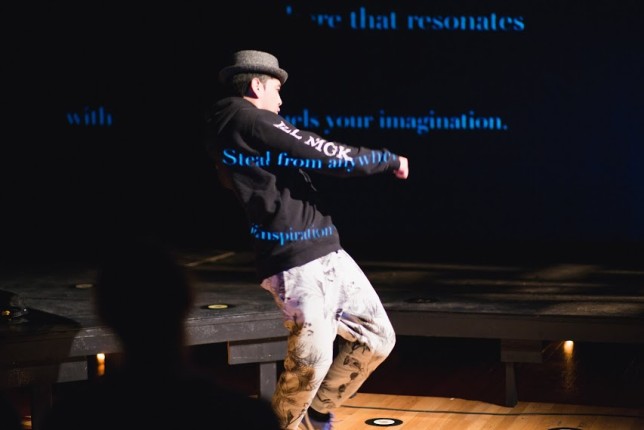 For those in the Albuquerque area, what you’re doing by attending is conspiring against the impression that theater is some kind of highfalutin, starched-and-parched experience. Revolutions is very much alive, and Tricklock Company is holding on to the reins, enjoying the ride without any intention of trying to tame it.

Revolutions runs until February 1, 2015, with shows taking place all over Albuquerque. Check out the full calendar, and go buy your passports! Also, on the last weekend of the festival, Revolutions is uniting with Theatre Without Borders who ask, among other important questions, “What is the impact of our stories?”