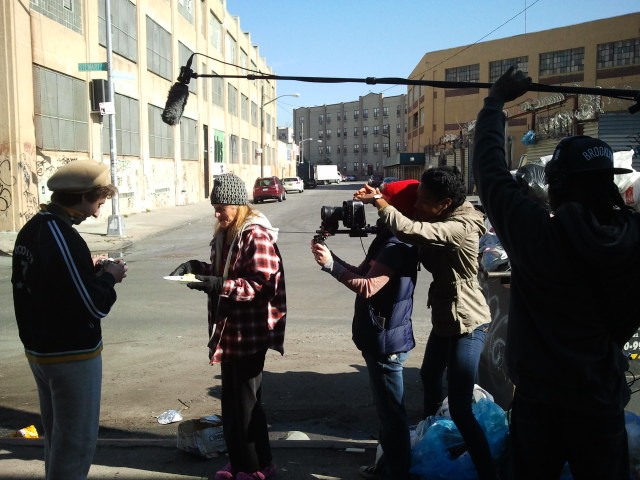 Esther Friedman is an independent producer, writer, actress and certified emotional freedom technique practitioner based in Brooklyn, New York. She is the creator of and stars in Hysterical Historical Hillary, a web series currently being funded on Seed&Spark.

All I’ve been doing this evening is saying thank you to a power greater than myself. I wonder if the cast and crew can hear my grateful whispers.

Today’s shoot was seamless, which is a lot to be thankful for. On any given production day, it’s normal that something goes wrong or not as planned. Every day, I am a little on edge wondering if I will need a plan C if we exhaust plan B. They say to always have a plan B, but what about C, D and E? But after a while, I begin to accept the inevitability that something will come up and throw everything off course, so I might as well go with the flow.

I feel the energies of everyone else giving their all, being so present, having a good time.

I remind myself that there is the possibility that everything could not work out so that something better may take its place.

I did wake up this morning turning it over. My frenzy all week to get 15 yogis to commit to shooting a class scene started to ease up as five cancellations came in back to back—it was down to four, including our yoga teacher and myself in the scene. When do I tell our director, Sam, and everyone else about this hiccup? I wait until Sam had breakfast, then put out a text to confirm the final two yogis, Vernell and Jennifer. They both confirm; I am relieved. Sam and I pick up our producer, Melissa, and sound man, Olu, and I tell them, too.

And the show goes on. Sam, Melissa and Olu talk it out during the car ride into Manhattan. We stick to the plan. I pull over to get Subway sandwiches, there’s a parking space in front of the joint. We sit down for lunch, shoot the breeze, and get back in the car. We cruise uptown. I had factored in the time for driving around in circles to find a parking space in New York City. Parking proves to be no problem. We unload the equipment in one trip up the elevator.

Within minutes, our yoga teacher Luz arrives! Minutes later, Vernell arrives! Norma, owner of YoGanesh studio, helps out where she can. Rockstars Melissa, Sam and Olu do what they do—immediately figuring out how to position the camera, blocking and lighting. They do a lot of stuff behind the camera. They make marks and find shadows. I call these guys the shadow hunters.

Luz, Vernell and I rehearse the yoga moves, then yogi Jennifer arrives!

What is pretty super cool is that the scene starts out with the Adi Mantra “Ong Namo Guru Dev Namo.” Translated, this means “I bow to the Creative Wisdom, I bow to the Divine Teacher.” The mantra is chanted at the beginning of a Kundalini Yoga session to help us tune into the Divine flow and self knowledge we all carry within. Because we shot a master shot in various angles, we had to say this mantra before each take. We had to tune in each time.

We listen to the same mantra in song for each take. I cannot get the mantra out of my head, but there is no need to.

From the Gurmukhi language:

Aad Such Jugaad Such Hai Bhai Such Nanak Hosee Bhai Such

Translation: True in the beginning, true throughout the ages, true even now, Nanak, truth shall ever be.

The focus of this mantra is to help remove blocks when you get stuck and help get you get moving.

The space becomes sacred to me. I feel the energies of everyone else giving their all, being so present, having a good time. We got to do some yoga moves and dance to Luz’s tunes which I will share here for your own yoga flow.

Indian food was scheduled to be delivered at 5pm. When it arrives, we wrap!

After eating, we get to look at some of the footage. What I see is beautiful: gorgeous, empowered women who filled the space with so much light and love that it shined through the screen. Sam, Melissa and Olu captured that.

Photo and video by Esther Friedman.