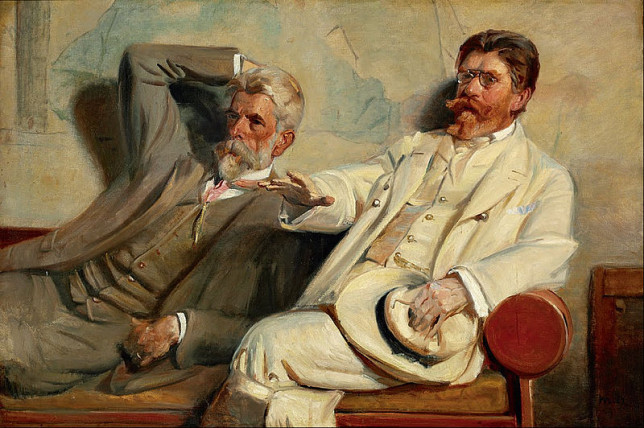 “No, no. Of course we like it, chap. We do, I swear. Please don’t do anything so drastic as unfriend us.”

The whole “haters” thing comes from the generation after mine, so maybe I’m just too old, but I still think hate should be reserved for actual angry, vicious, I-despise-you hatred as opposed to that somebody who doesn’t like the thing I made. So maybe it’s just me, but I think it’s a disservice to opinion to allow only two options, “like” or “hate,” when it comes to peer criticism.

Everybody likes the “likes.” You post your illustration work on Tumblr or Facebook or Instagram and wait for the approval to roll in. All your friends say wonderful things about you and your work. They are such supportive people. But then you run into a “hater.” This hater could say anything from “I think this is a piece of shit” to “I think you might want to fix that character’s hand.”

Social media is and will always be a public forum, and there’s no longer any such thing as a casual remark.

Now, if you choose to, you can exist within an insulated bubble of “likes,” and all those who dare criticism can be easily dismissed with the ignominious distinction of “hater.” This is much like the criticism-proof subjectivity that is all too common in so many art schools and art school graduate programs. In a post-modern world, there is no objective standard of quality.

But that’s not really what this is. The rationalization more prevalent on social media isn’t so byzantine. It’s more like an addict who denies their addiction—in this case, an addiction to “likes,” to approval without judgment. And of course, you always have the option of expelling the haters from your social media circle to prevent them from ever expressing their hatred again.

Social media is a place where criticism isn’t accepted unless actively invited. And if you do invite criticism, you end up inviting everyone. You leave yourself wide open to haters and likers alike. While such behavior is less risky for the up-and-comer, airing out your uncertainty in public can be a professional liability. The illusion of absolute resolve is critical if you’re going to present yourself to the professional world. You depend on your client’s confidence in your skill, and compromising that confidence with wishy-washy talk like, “Does this look okay?” can undermine their faith in your ability to fulfill the demands of the job. And you never know who’s listening.

I’ve been scolded before for criticizing my peers, even if indirectly. A casual, critical comment of another artist’s work on Facebook could easily be overheard. It’s happened to me more than once. Recently, I mentioned on a friend’s Facebook page that I felt a book we were discussing had a right-wing slant, and the author showed up to contest the accusation. Nowhere is safe.

Another time I wrote an essay about a veteran children’s book illustrator on my blog, but didn’t consider whether he might actually read it. Though it did contain praise, I was critical of his early work and later output. Sure enough, he had a Facebook account, and when I posted a link to the essay on Facebook, someone tagged him with the message, “What do you think of this?” I don’t think they meant any harm. They just happened to know the guy. If someone were writing about me, I’d want to know too.

I mentioned this incident to the same peer who had warned me about watching my step before, and he once again said that I shouldn’t write stuff like that. It’s not professionally healthy. But how far does this go?

I recently criticized a trailer for a popular animated movie on Facebook. The only problem was that I had peers who worked on the movie on my friends list. I hadn’t considered this. In fact, I have peers who work on any number of movies behind the scenes, particularly in the area of computer animation and pre-visualization, so a comment about a popular movie that from most anyone else would be considered casual could end up being overheard by someone I would rather not have hear it; and they could very well take it personally.

Not long ago, a cartoonist I know—we’ll call him cartoonist A—made some remarks about another cartoonist. Every time some tragedy occurred in the news, this other cartoonist—cartoonist B—offered a new “wallpaper” in exchange for a buck donation to some charitable cause. Cartoonist A thought that this was less an act of selflessness, and more a way for the other guy to promote his brand, and he thought that this time B had gone too far. After the Ferguson tragedy, B offered a wallpaper that featured an image that A thought was both insensitive and crass. I happened to agree. Fortunately, this time no one cared about my opinion. B wasn’t so lucky.

Now I’m not sure if A ever imagined that his remarks would be seen by B or anyone else outside of his immediate social network, but somehow they ended up on a site we’ll call “Exsanguinating Frosty News,” and subsequently, A was bombarded with a deluge of charming emails and twitter posts, at least one that suggested he commit suicide. This, I would consider the other kind of hate, genuine hate, a response to a remark that should have been regarded as merely critical. But such is the nature of anonymous internet discourse.

Before Exsanguinating Frosty picked up the story, it wouldn’t have gone much farther than A’s Facebook page, but unfortunately, everything you post on social media is fair game. Anything you say on Facebook or Twitter can find its way onto a news site or other media outlet with or without context, even if all you thought you were doing was talking to a select group of people; even if that new audience, the audience of whatever media source has co-opted your remarks, has no idea who you are. Because social media is and will always be a public forum, and there’s no longer any such thing as a casual remark.

So unless you’re expressly a critic, one of those awful critics who say critical things, you must step with care when speaking of a peer. Not everyone does. Both professionals and amateurs alike often break this tacit rule of “like not hate” without intending to. Since casual criticism tends to be an active part of our everyday dialogue and you never know who might be listening, toes can be easily stepped on, and there are consequences.

And of course, when addressing a peer directly on social media, it should always be “like” and never “hate,” because anything less than a “like” will most certainly be considered a “hate,” if not by them, then by any number of their supporters and fans. Because criticism, any criticism, is not just a comment on the work, but a personal attack on the creator themselves. Or so the likers would have you believe.

So we have no choice but to stay relentlessly positive. If you can’t say anything not hateful, don’t say anything at all. “Dislike” is not an option. Neither is “like with reservations.” It’s either “like,” “hate,” or no comment; or “oh, did you post a new piece? I must have missed that. Do you have a new book? I’m sorry, I had no idea. Movies? I rarely go to the movies these days.”