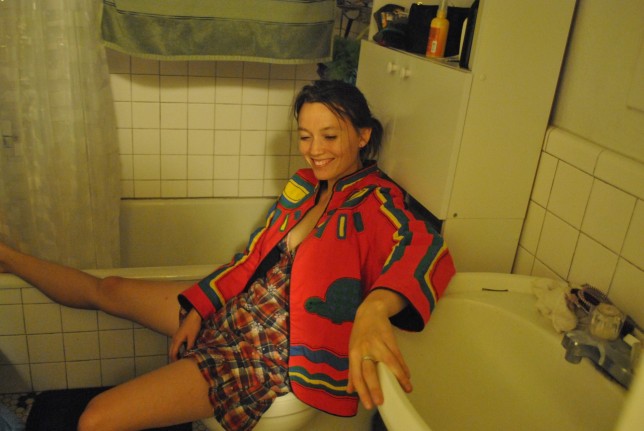 Only one photo of exists of me sitting around my house doing nothing. And I’m on a toilet. Photo courtesy of Tabatha Shaun.

After the serendipitous afternoon that led me from a billboard to my psychic friend to a talent agent, I sat down and set some career goals for myself. My goal for the month was to get on a film set to work background. Check. My next goal was to take a few screen acting classes. Check. By the end of my first year, I made a five-year goal to stop working for free unless I really love the project. Check. Join SAG-AFTRA. Check. My ultimate career goal when I was 18 years old was to work on a film that made it to Sundance. Eighteen-year-old me didn’t think I’d be able to say “Check” so soon.

At year seven, I accomplished that goal. The Guest, by director and writer duo Adam Wingard and Simon Barrett, hit the film circuit and has been doing great. It kicked off Sundance’s 2014 Midnight Madness and it shot Dan Stevens into the gravitational orbit of Hollywood. Then, The Guest made an appearance in movie theaters across the country, something I never had on my career goal list. Another movie I worked on, Persecuted, also had a nationwide release. Two movies in movie theaters at once, I never imagined!

Edward Norton’s character in Birdman says, “Popularity is the slutty little cousin of prestige.” I’m gaining popularity. It’s not instant, and it’s largely with men who send me creepy messages, but it’s happening. Some of these people believe I’m as successful as my costars in The Guest and that I’m actually a Hollywood actress instead of an unemployed actor eating quinoa every day because it’s cheap. Go on, people, continue to Google me and I hope you stumble upon my Tumblr and read about my very uneventful life and continue to support me. I’ll update my networking and media sites, and I’ll continue to spend hours researching and practicing for my auditions and maybe one day I can eat some wild-caught salmon and asparagus on top of my quinoa.

Work on characters I’m really fucking proud of working on.