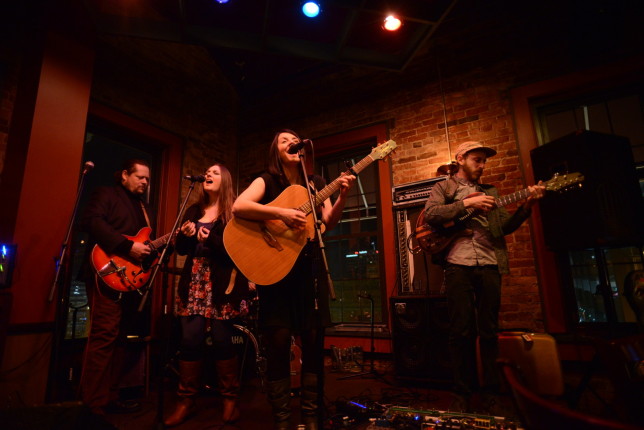 This interview with Dena Dena Dena was originally published at Grassrootsy by the lovely Joy Ike. Catch Dena on Twitter @MsDenaDenaDena.

1. So you’re pretty new to playing out and touring. What made you decide to go from closet musician to being on the road so consistently in just a year?

My father, also a musician, passed away in 2009. And when he passed away at a very young age, it shook me from my very mundane life and made me realize life is very short and I better start doing the things I love! So I started a terrifying journey toward the one thing I love the most, and that’s music.

In 2010, I moved to downtown South Bend and became very involved in the music scene simply by going to shows and getting to know local bands. After spending a year getting to know the music scene, I started hosting shows in 2012. I would host showcases that featured touring and local bands about which I was very passionate. In 2012, I also bought my first instrument, a ukulele, and began writing my own music. I’d always been a singer, and the thought of learning to play an instrument was terrifying, but I knew that if I didn’t start somewhere I would never start.

It was a very aggressive 2-week tour, and it changed my life.

So in 2012 I was writing my own music in private and continued to host shows. I, along with my dear friend Gus Bennett, started a house show venue called The Pool. The Pool was located in a building that used to be a high school but had been renovated into apartments. Our apartment was the former school swimming pool. We began hosting live unplugged music concerts featuring local and touring artists in 2012. We’d put together shows, promote the shows, open up our home to the community, feed the artists, collect donations for the artists, and give the artists a place to stay. To this day, those shows were the most remarkable I’ve ever witnessed. It’s there that I started to watch and absorb what professional local and touring artists were doing.

With every show I hosted, I was also studying, and taking those lessons back to my craft. Then in the summer of 2013, I took the plunge and started playing out locally as much as possible. When I felt confident that I had a solid set, I started reaching out to all the touring bands I had taken care of at The Pool to see if there might be touring opportunities in the Midwest.

Then in April of 2014, I did my first long tour with South Bend band, Von Strantz. We toured from Indiana to Texas, Texas to Colorado, Colorado to Wisconsin, and then home. It was a very aggressive 2-week tour, and it changed my life. I became addicted to road life, and now every tour is an adventure. I love seeing new places, playing new spaces, meeting new people; there’s just a very special magic that the road holds. I think I will always be a touring musician.

2. As someone who is just starting out, what would you say is the number one thing you have learned from touring and being in a different city night after night?

When I was first starting out as working musician, I had a pretty serious life talk with my dear friend, and now housemate, Nathan K. He has been a full-time touring musician for 8+ years, performing solo as Nathan K. and with his band, Stepdad. He’d been on the road for years, and I was really eager to get his advice. He told me the most valuable piece of advice I’ve ever received and I remember it all the time. He said:

I’m thankful, every day for that piece of advice. When I did my first tour with Von Strantz, I was really nervous, but also thought I was ready to face anything. Then day one of tour, the van breaks down on the side of the road 45 minutes north of St. Louis where our gig is. We could have easily freaked out, but instead, Von Strantz’s touring manager, Amoreena Pronze, said to me and Jess Strantz, “Girls, get your instruments out and start singing on the side of the road!” So Jess grabs her guitar, and I grabbed my ukulele and Jess says, “I feel a song about this coming on.” Jess showed me the chord progression, and then we started improvising a song about being on the side of the road and waiting for AAA. It was a tough situation that at first I thought would break me on the first day of tour, but thankfully I was with seasoned touring pros and we made the best of it. That was one of the moments we were in “the gold.” 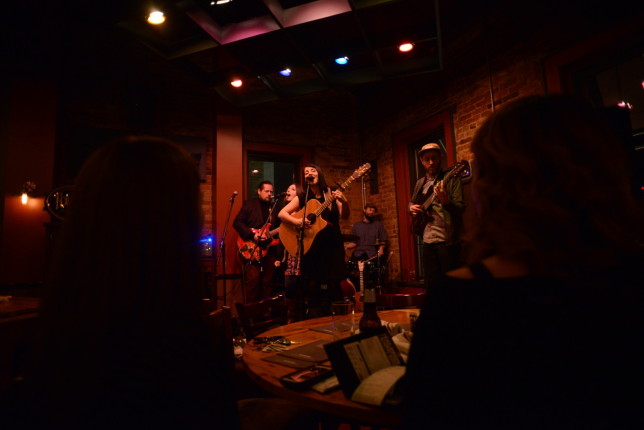 3. Even though you’re new to performing, you’ve been on the other side of things for several years—starting a music house concert series in your apartment complex called The Pool and booking for other venues in South Bend. Which side of the industry do you prefer and why?

I was born to sing, and I’ve known that from a young age. I was given a voice that was lovely and unique, but as much as I love singing, I become my best version of myself when I’m creating. Writing new music makes me come alive, it makes me fall in love with the world again, it makes me feel calm and centered and as though I have purpose. I’ve been touring pretty aggressively the last six months, but recently I’ve grown a bit tired, and I’m ready to hibernate. For the first time ever, I’m excited for winter, because I plan to spend all winter writing as much as possible. So I guess I would have to say I love being an artist first and foremost. However, I have very strong passion for building the music community in South Bend.

I also have a heart for bringing new music to the South Bend community and taking care of touring artists. Since I’ve been on the road, I know what a blessing it is to be taken care of when on tour, and I want to show touring artists ultimate hospitality when they visit South Bend. I’ve been very fortunate that many community members have followed the same lead, and have shown touring artists hospitality by attending their shows, buying their merch, and some have even offered housing for the artists.

Additionally, South Bend is an incredible city. It’s one of those cities that is excited about new ideas and it’s just big enough to make ideas a reality but not too big that you lose the community connection. I’ve been blessed with an overwhelming amount of support for all the initiatives I’ve tried, whether it was The Pool, SBSB Music Fest, Chicory Cafe, No. Coast Social, and even my own music. South Bend is vibrant and home to a thriving music community, and I’m pretty excited to put my energy into consistently encouraging that environment. 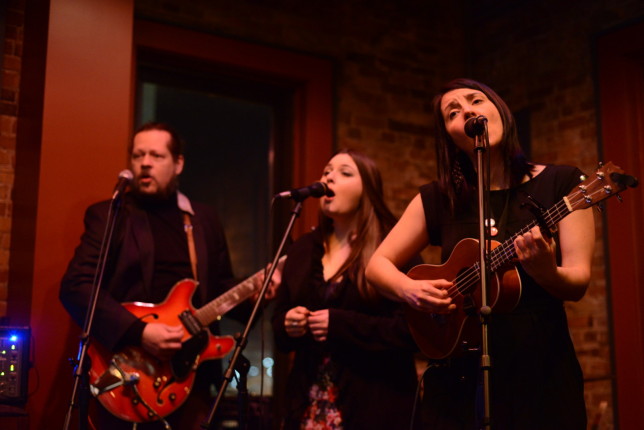 4. For the hundreds of emails you’ve received from local and touring musicians looking to play at one of the venues you book, what is the best advice you can give to an artist pitching themselves?

Be yourself and be humble. I love when I get an email from an artist that is humble yet on their game, but also sounds like a regular human being. Additionally, send the live video or music links that are most reflective of the sound you plan to bring into the show. Don’t send a solo acoustic video if you are bringing a full band and vice versa. Lastly, don’t take “no” personally. I’ve had many artists lash out at me because I’ve said “no.” As an artist, I’d much rather hear “no” or “yes” versus nothing at all or “maybe.” I don’t want to play anywhere that wouldn’t be a good fit for me to play, so I never take “no” personally because it’s not personal, it’s business. You and the venue will have a much better experience when the venue feels your music is a good fit for their space.

5. What is the worst email you ever got from an artist and why?

I’ve had a couple artists be pretty critical and hateful to me via email, because they don’t agree with how I book my shows, or because I said “no” to their band. When I plan shows, I try to make the decisions that will benefit the bands, venues, and audience the most, and sometimes that means certain bands aren’t an appropriate fit. I don’t work with people that resort to verbal insults, so I know quickly not to work with artists that handle their business that way. Additionally, I don’t take it personally. I’m confident that the effort I’m exerting and the work I’m doing is good and with good intention. Do I get it right every time? Of course not, but I always learn from the victories and the failures.

6. There are a lot of great artists who are afraid of stepping out on a limb and touring. Why do you think that is? And can you offer advice for someone who wants to take that leap?

Touring is associated with a lot of risk. You are going to places you’ve never been before, playing venues you know nothing about, and sometimes you don’t know if you are going to make money, or have a place to stay, or food to eat. It can be scary and uncomfortable, and a lot of people don’t like to feel uncomfortable. I personally love it. I love the challenge. I love the unknown. I love the adventure. But the thing I love the most about the road is the lessons. I learn so much and grow so much when I’m on the road. I never know what I’m walking into when I arrive at a destination, but I’m excited to see if I can walk away from a destination and feel like I accomplished something.

Sometimes the victory just comes in surviving the shows and surviving the hard stuff. For anyone that wants to take that leap, my piece of advice, and it’s more of a command, is DO IT! When else in your life will you get the chance to get in a car and got to new places and do what you love? It’s a ton of work, it’s not a vacation, but if you think you might be ready for that adventure, do it! And if you do it, appreciate and make the most of every moment while on tour, because once you get home you will miss the road!