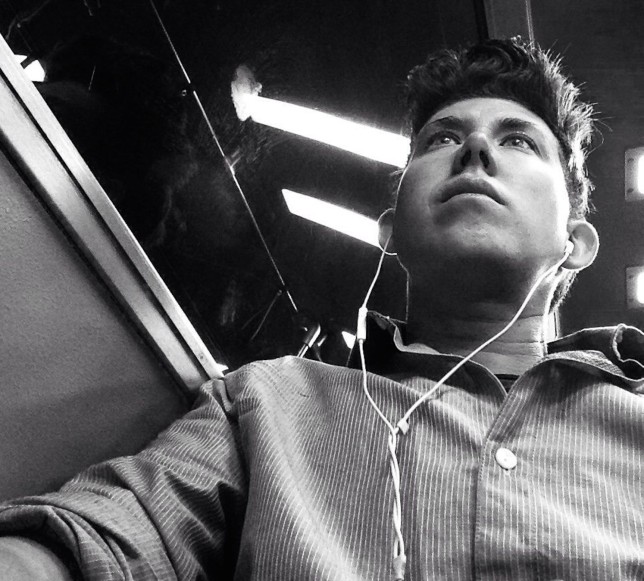 I deleted my Bandcamp sometime in October or November. I can’t remember the exact date now. It felt a lot like sitting in front of a prepped fire, ready to let it all go up. I deleted two EPs and three albums: my musical work over the past four and a half years. Though my band is still very much alive (it consists of me, sitting here writing this), its sound is about to change, and my name already has.

The most difficult aspect of coming out as transgender, and changing my name to fit my gender identity, has been that it also created a musical and professional crisis that I would have rather avoided. The way is unclear: There’s no book or advice column on how to come out as transgender when you’re an artist with a body of work with your (old) name on it. I did manage to avoid this issue for a while, but finally the importance of being seen as the correct gender and my mind and body becoming congruent with each other was more important than the identity I’d built as a musician.

When you are a transgender guy, it doesn’t matter how much you look up to someone like Kathleen Hanna or Patti Smith.

I watched Laura Jane Grace do this seamlessly—but she has a band name, Against Me!, which means that the name of the front person changing isn’t as important. There’s still all of the fear. Will fans still embrace her? Will they still listen? Will this be career-destroying? But the brand remains the same. People can still find her at the same spot where she’s always been. She’s still in a great band called Against Me! I, on the other hand, felt like I had to break up my band to start anew.

Since August, it’s been a very complex psychological death and rebirth for me, being transgender. I didn’t get rid of everything to hide who I was before. I just didn’t want to be compared to my old self. I didn’t want to be reminded. I couldn’t stand to sell any more albums under the pretense that I was still that person. That person wasn’t a lie, but also not entirely true. I needed to begin again. Delete. Clean screen.

It’s maybe for this reason that I never really wanted to go by my own name when it came to playing music. It just happened, sort of like my career in music happened. I picked up the guitar and I started writing songs, then people asked me to play shows where I was listed by my given name. I didn’t have time to think about a band name, and plenty of singer-songwriters just go by their own name, so I just went with it. It was kind of similar to how I just went with everything related to my given birth identity. I was used to this way of living: I accepted these things as facts of my life and tried to make the best of it. 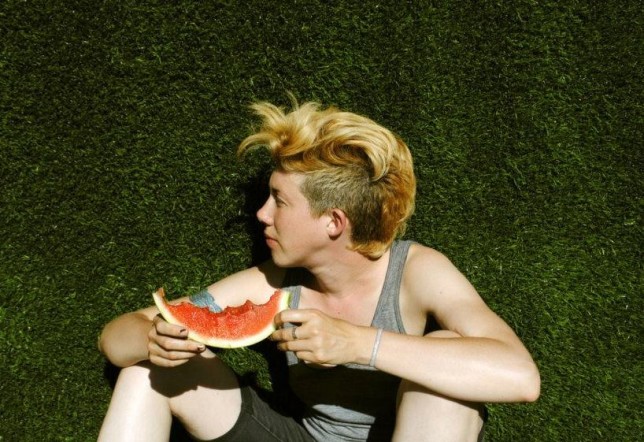 The interesting thing for me personally was that around the time I started making music was also the time I started questioning my gender identity. It was upon my move to Berlin that I stopped identifying with my assigned gender and started identifying to myself as genderqueer. About a year into playing the guitar, I started asking my girlfriend, playfully, if she could refer to me with male pronouns, but it never really took. I didn’t have the guts to seriously ask for this. Two years in, I’d already toured here and there and successfully raised money for an album via Kickstarter. I also began feeling trapped by my name and this act that I’d created. I never actually came out publicly as genderqueer. I think that’s because I knew that for me this was a slippery slope towards the whole truth, that I was transgender. I know that all of these terms fit under the larger umbrella, but at the time (2011) this wasn’t mainstream knowledge.

When I was searching for answers in my tiny Berlin kitchen a few years ago, there weren’t nearly so many genderqueer people on the internet. I remember sitting in a cafe as recently as early 2014, picking up a local zine and discovering that genderqueer was under the trans* umbrella (and learned about the asterisk). I think I comforted myself with this knowledge at the time. I could still be trans but be genderqueer and be safe there if I remained supposedly identified with my female body. However, I was not comfortable with my female body.

So far it’s been the ultimate lesson in impermanence.

I spent a solid week in 2012 trying to come up with a new band name for myself. Looking back, this was really my way of trying to change my name in general. I was looking for something gender neutral. I thought about Jonah, or Junah, but somehow I got dubbed Joan J. Jupiter for about a week. It’s funny because I think I was trying to come out as other-than-female but my femaleness ended up becoming more pronounced. On the other hand, it was obvious that for me presenting as female was like being in drag, but I don’t think anybody really got that.

On tour in the US in Summer 2013, I introduced myself as Lou at the first three shows. I didn’t know anyone actually took me seriously but a girl named Lou came up to me after our show in Olympia and said that that was her name too. I had to tell her that Lou actually wasn’t my name, but we did go to the same school (Penn State). This past summer on tour in Europe I barely felt like introducing myself or when anyone else introduced me, I felt more shame than pride, even though I was finally proud of the album I’d made.

So I made this album, and it sounds like a riot girl band, which is awesome, except for that I’m not a riot girl. I just sounded like one, because my voice was high, and because I’m a punk, and because I love riot girls. I also have much of the same lived experience, having spent 33 years of my life in a female body and presenting myself for a solid 27 years as a woman in one way or another. I spent a lot of years just wishing I would one day be okay with being in a female body, because female bodies are awesome, women are awesome, and riot girls are awesome, but that’s not the point. When you are a transgender guy, it doesn’t matter how much you look up to someone like Kathleen Hanna or Patti Smith. I tried for a really long time to just let Patti be my guide, but at the end of the day, for some reason that is a complete mystery to me, I just want serious facial hair. 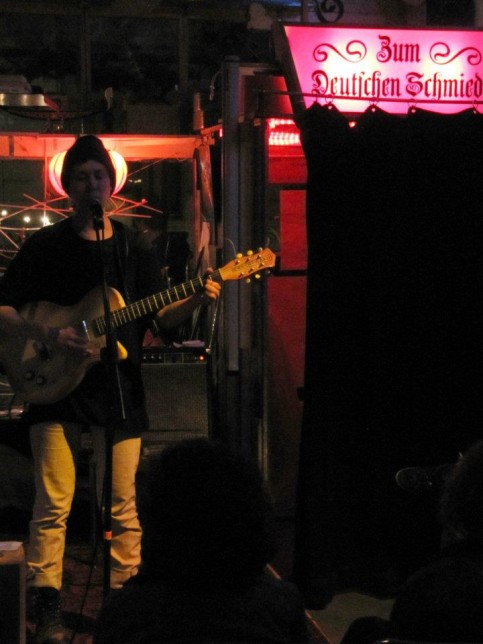 A show in Hanover, Germany 2012. Photo by Yoko Kikuchi.

In the beginning, when I first came out it felt like I was destroying myself, or at least everything I’d ever worked so hard to make. When I decided to go on hormones, the first month was wonderful because my mind felt better on them, but then there was the fear of my voice changing and knowing that I will never ever sound like I did on my last recording again.

I’ve started to come to terms with just giving myself up to the process. I was doing this awful back and forth mental dance for a while that just made me crazy. It’s scary going into what feels like an abyss at times. I don’t know what I will sound like. I don’t know what I will look like. I don’t know when I will feel comfortable with touring again. I don’t know if I will be able to fly with ease for awhile, when I’ll start passing as male and my ID will no longer make sense to security personnel. I will have to get that changed. I’m looking into surgery. Sometimes being transgender seems like a big chore. On the good days it feels like this is just what I have to do for myself. On the bad days it feels like this is all just getting in the way of me creating and performing and getting on the road again. I was very used to traveling and singing for people, sometimes even being invited to places spontaneously and just going to perform. Now I have to wait, at least for a little while, and go inward.

I needed to mark the end of an era. It was part of saying goodbye to my old musical-self. It was part of beginning to trust that this is right. So I deleted my Bandcamp. Everything was almost perfect—except that my life’s seeming near-perfection made it clear that I had to change. The name and the gender were wrong at least. Before I deleted my old Bandcamp I asked my fans for their understanding and support as I embarked on this journey. I have played one show since that day and I went by L.O.K., which are my self-given initials.

It was amazing to tell people that I’m on testosterone and therefore having a hard time singing some of my old songs. When I remember how free I felt singing up there letting people know that I identify as male, that I’m trans, that I’m right in the midst of all of the crazy changes, then I know that I didn’t destroy anything. I just gave myself the space I needed to move forward. So far it’s been the ultimate lesson in impermanence. That was always my goal in life anyway, to be able to let go of: my ideas of self, how others see me, needing to be accomplished, outcomes, expectations, any guarantees, of future plans. So here I am, with nothing really to show for myself except this voice which keeps on changing.

Liam Kelly is a recent transplant to the San Francisco Bay Area after four years of living in Berlin where he embarked on his path as a singer-songwriter. He has toured as far as Newfoundland, Western and Eastern Europe and back to the States last summer. After touring constantly for two years he is currently taking things at a slower pace, enjoying a return to visual art and writing while co-habitating with his partner and her son in Berkeley.

View all posts by Liam Kelly →