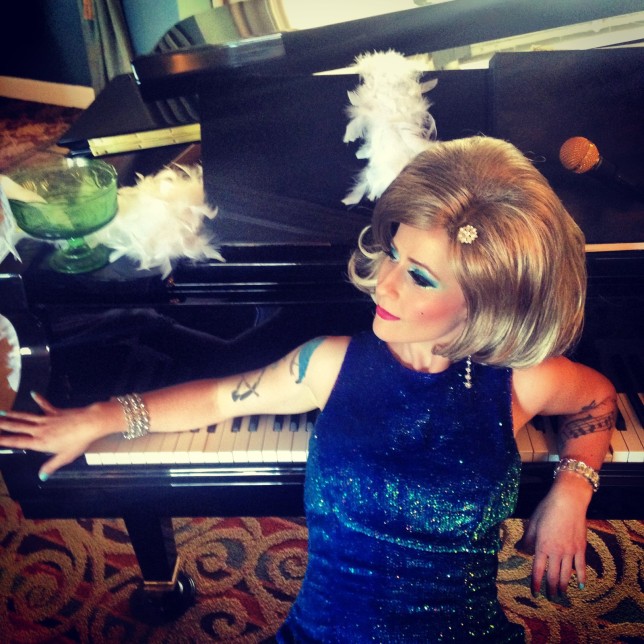 “I’d love to play here,” I blurted out during my filming session, as I placed a CD in his hands.

Those of us who gig regularly in this industry know that being an independent musician playing original music is not a guaranteed money-maker for the vast majority of us. It’s just not. No matter the sexy headlines, no matter the slick marketing materials, no matter the monthly paid services, plays, and clicks. The reality where I stand is different, yet extremely satisfying and challenging. I want to talk about my path; I want to share my gritty reality with you. I want to help lift the curtain on the corporate homogenization of the independent music industry.

Since 2007, I have released 11 albums of original music. My style is heavily influenced by the songs of Burt Bacharach and Hal David; I am a female piano player aggressively gate-crashing what has traditionally been an all-boys club on two fronts: Not only do I write and release original music on a consistent basis, I am also a working pianist who is often the only woman in rotation at the piano bar. (More on gender later.) From the age of 13, I was working as a professional accompanist in my tiny home town, playing for weddings and churches when duty called. Making the transition from touring indie-pop artist to piano barfly was a logical one, but it’s been full of surprises.

In 2013, I released my best full-length album to date, Geography and Other Problems. It’s the jazzy, lounge-y record I had wanted to make for a very long time. Making the costly decision to properly format, press, and create a professional CD was one of the best things I’ve ever done for my career. I handed my “business card” out to anyone and everyone, and my package of original piano-based music opened up many profitable doors for me to…play covers? 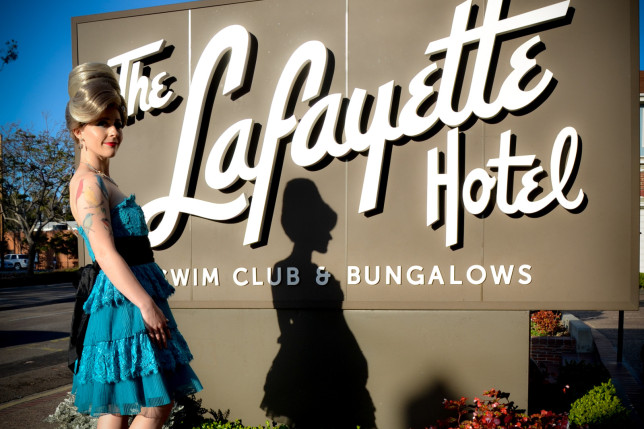 I was invited to film a television segment for our NBC San Diego music affiliate, SoundDiego. When asked where I would like to film my first television segment, I did not hesitate. Of course I wanted to film it at the historic Lafayette Hotel, which is where my mother and I stayed during my very first visit to San Diego. The hotel has always held a special place in my heart, and I was thrilled when the manager enthusiastically accepted my request and told me he was a big fan of my music. “I’d love to play here,” I blurted out during my filming session, as I placed a CD in his hands. “Sure!” he replied. “Let’s talk about it soon.”

Within weeks, I had a contract to play in the hotel’s lobby during happy hour. The hotel was built in 1946, and many celebrities of the ’40s and ’50s stayed and socialized at the Lafayette. In keeping with the branding of the hotel, I wear my typical vintage 1950s and 1960s fashion, complete with wigs and jewelry to match. I throw original tunes into my mix here and there, but I mostly focus on jazz standards from the 1940s through the 1960s. Working in a hotel is an interesting experience; I’ve met just as many locals as I have tourists from abroad. Although my main job is playing covers, I sure have sold a lot of my CDs while doing it!

To me, learning covers is a constant exercise in improving my musicianship.

I work in a gay bar every Saturday with another covers project. We’re called Blue Velvet, and I like to describe us as a “big gay cabaret.” Every week, I spend an hour getting into makeup, eyelashes, costumes, and wigs before heading to a tiny gay bar that’s been untouched since the late 1960s. We sing everything from musical theater to Abba, the Carpenters to Burt Bacharach, Madonna to Cher. It’s a blast, and it’s the hardest work I’ve done since I was performing in a competitive show choir all through my high school years. For four hours, I stand, sing, dance, gesture my gloved and bejeweled arms around the stage, and crack dirty jokes for our regulars and anyone who stumbles upon our time warp of a cabaret.

In addition to these projects, I also do fill-in work at piano bars and play regularly at other venues and wine bars. Each location is different; some places want a more traditional piano bar experience, where you interact with your crowd, other locations are more interested in background or mood music. I also play private parties and events when the opportunity arises. I enjoy learning new songs and adding them to my book; I also love when I can play a request and make someone happy to hear a favorite tune.

I understand why some musicians don’t want to play covers as their job. I get it, but I don’t feel the same way as a result of my personal experience. I am not resentful or upset in any way that most of my income comes from live performance of other people’s songs. To me, it is a constant exercise in improving my musicianship. When I learn songs by other songwriters, I learn more about what it means to be a good songwriter. I ask myself a lot of questions. Why do I enjoy playing songs by these songwriters? Why do people respond to these songs in the way they do? What were these songwriters doing sonically and lyrically to make the song better or to provide more of an emotional connection for the listener?

My extensive covers repertoire teaches me so much about the craft of songwriting. I am continually learning and growing each time I add a new song to my book, sit down to chart out a song by ear, and when I arrange a song for solo piano. I can’t believe how much music there is out there. I don’t know all the songs by many of my favorite bands and artists. It’s amazing to be able to discover music and rediscover music on a regular basis. I have improved by leaps and bounds as a player, a singer, and a composer since doing regular cover gigs. I am also getting a music theory workout that I haven’t had since I was in high school!

My ultimate goal is to be known and remembered as a great songwriter. I love performing my original music, yet the thrill I get when someone else covers one of my songs is unlike any other. I have been working on a project to get my friends and their bands to cover my songs. To have someone want to sing a song you’ve written is the ultimate compliment for a songwriter. Maybe it’s just because I’m a songwriter, or a pianist, but my approach to my cover gigs seems pretty different than many approaches I read about in the indie music community. My cover gigs are what enable me to meet the musicians who record with me. Playing in a piano bar helps me connect with people in my city. The income from my “steadies” pays for recording sessions and CD pressing, along with various expenses and upkeep, and my tips on Saturday night always buy me brunch on Sunday morning. There are many other benefits, too. I’ve learned more about arranging in the past year than in my whole musical life to date. There’s no better way to get to learn a song, to learn the performance and craft of a song, than to sing it every single week for a year.

At the end of the day, a job playing piano in a bar is a job just like going into an office, delivering packages, or working in a store. There are up days, and there are down days. There are times when there’s nowhere else I’d rather be, and there are slow nights where I’m watching the clock. There are fabulous nights where everyone comes into the bar ready to party, and there are the crazy nights where people who are high on drugs start rearranging the tables in the main lounge area (yes, that did happen). My main mission in my life as a musician is to demystify the experience. I know there are many people who think the life of a full-time musician is all about original compositions. There are many people out there working hard to make that happen, and I admire and respect them. My experience right now is a little different. I want to talk more about the in-between places that musicians go to; the church pianists and organists, the accompanists who play for theater productions and musicals, the musicians who earn their keep by running studios and doing session work, and the people like me, who are figuring it out one gig at a time.

Normandie Wilson is a singer, pianist, composer, multi-disciplinary artist, and fashionista living and working in sunny San Diego. She has released 11 albums of original music since 2007, along with a (hilarious) book about her experiences in the music industry. Normandie plays with San Diego bands Blue Velvet, Casino Royale, and occasionally with SoCal indie-pop mariachi legends Red Pony Clock. After years of extensive national and international DIY touring with her music, she recently stepped into the life of a working musician, and boy—it’s nice to be able to write off wigs, makeup, and pantyhose on your taxes. Normandie also devotes her time to creating visual art, working in photography, painting, and stained glass. She loves to write about what really happens when you’re working at a piano bar and the lessons she’s learned from the untamed no-man’s land we call the “New Music Frontier.” Normandie’s music blogs have shaken the internet up since 2012, and she is excerpted in the latest book from indie music guru Martin Atkins. You can step into her fabulous online world at her website.

View all posts by Normandie Wilson →