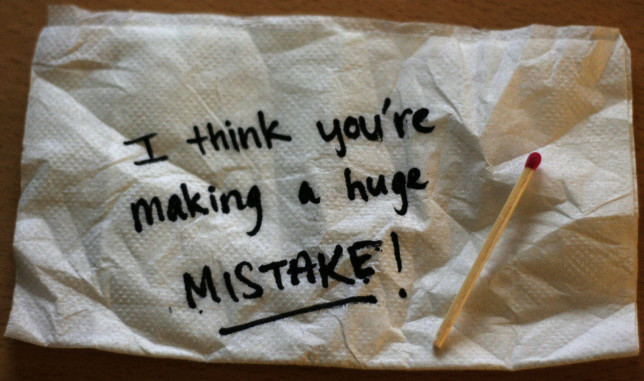 “I’ve been doing this over twenty five years. I don’t make mistakes,” the sound mixer explained aggressively over the phone.

Twenty-five-plus years of experience does not equate to perfection. This was the case with my sound mixing colleague, who—naturally, made several more mistakes after making that statement. What would have better showcased years of experience is taking responsibility for these mistakes instead of trying to make them someone else’s.

On a feature film in the not so distant past, a handful of post-production technicians remained steady and headstrong through a bombardment of software malfunctions, sleep deprivation, email mishaps and…well, unprofessional people. Thankfully, many group hugs carried everyone through.

Production is about teamwork and collaboration, not about one person swimming self-righteously upstream.

Life is so much more than a stressful month of long hours on a job.

The first week of the gig, I arrived at the office to find a screaming camera loader on the other end of the phone. Apparently he had been informed that we would release camera media back to him as we processed it, opposed to the twenty-four-hour turnaround agreed upon. Although this was not the workflow discussed, he decided that yelling at me as if I had personally wronged him was.

“I can’t help you if you are yelling,” I said in a hardwired customer-service voice. Many years as a bartender and server has created a thick skin that I’m strangely grateful for.

Not unlike some unsatisfied customers, he was more concerned with yelling than fixing the problem. He was not my boss, however, we were on the same team. I understood his frustration and there would be a time where he had the right to be annoyed, but he should have never yelled. It’s not professional, regardless of who is right or wrong.

It’s more efficient to take responsibility for mistakes so that they can be corrected and improved upon. Transferring anger to someone else is only going to make their day worse. Nothing is solved that way.

As historian Cyril Parkinson wrote: “The void created by the failure to communicate is soon filled with poison, drivel and misrepresentation.”

A problem that could be fixed in a couple minutes, suddenly balloons into drama and hurt feelings all around.

Don’t talk smack about someone “starting a fire,” put it out instead. Otherwise, you’re just going to look like a jerk with bad communication and problem-solving skills, even if you are actually a nice guy.

Always “be the solution to someone else’s problem,” as Stewart Lyons once said.

No one wants to hear you complain, especially about another teammate’s mistakes. Why? Because everyone makes mistakes. So please, help them out instead. I’ve said this before, but no one wants to work with people who: yell, complain, gossip or cause drama. Production is about teamwork and collaboration, not about one person swimming self-righteously upstream.

Memorize this mantra instead: “What do you need?”

No one likes making mistakes, I get it. I have to make an effort not to dwell on my own, no matter how small. I’m a perfectionist and sometimes it’s quite painful. I’ve learned however, that humility is the first step to correcting your mistakes, even when it’s the last thing you want to do.

Heck, I made mistakes on the production in question. I sent an important email prematurely when a camera report fell on the keyboard, and didn’t notice an email malfunction that made for an angrier camera loader (I would have been annoyed too). Did I apologize? Of course, even when it was humiliating, particularly because I knew they would never do the same.

I did my best in bad circumstances, learned from them and moved on. There are no hard feelings, and I would buy that individual a beer and share war stories later on.

Life is so much more than a stressful month of long hours on a job. Remember to let things go. People are generally not so bad when their stress level declines. Try not to sweat them too much and help whenever possible. Don’t be too hard on them or yourself.

Final piece of advice: always make peace, mistakes, great art and attempt to be less of an ass whenever possible.