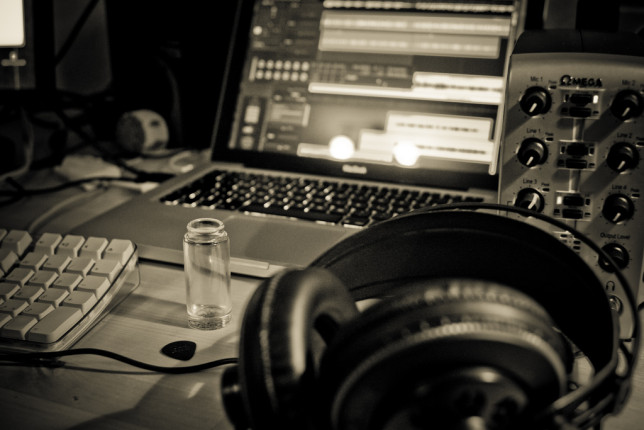 A couple weeks ago I wrote a post about how hard it is when you’re self-producing to know when you’re done with a recording. It’s hard! But despair not; this time, I’m going to offer some ideas on how to make well-produced recordings.

The easy and obvious way to make good recordings is to find a good producer to work with. Good producers have developed a sixth sense that tells them when a recording is working. It’s pretty impossible to communicate—for me it’s sort of like a sensation of something that was itching having been scratched. I assume it’s different for everyone, and similarly nebulous. But if you have one of us working for you, we will let you know when that’s happening for us. That’s a large part of what we’re there for.

The infinite possibilities of computer recording can be overwhelming.

But what if you can’t work with a good producer? Well, first of all, hint hint, you can. Send me an email: jamie@secretagentaudio.com. But let’s say that you don’t have a budget, or you like doing things yourself, or there is some other circumstance that’s precluding you from engaging a professional. What should you do then?

My single biggest piece of advice would be: Focus on the song. I know this probably sounds like “duh” when I write it out all straightforward like that, but it’s amazing how many people get all caught up in the process of making a recording and totally lose sight of why they’re making the recording in the first place. Without a song, you’ve got nothing. So put the song at the center of your vision. What does the song need? What are you trying to communicate with this piece of art you’re making? Refer back to this thought constantly and you’ll be in decent shape.

Idea number two: Under-produce. Or, to put it another way: When in doubt, go minimal. The single biggest cause of getting stuck and not finishing records is the “It just needs one more thing” trap. All of a sudden you’ve got 40 tracks of acoustic guitars and keyboards and everything’s muddled and nothing’s making any sense. So, why don’t you try to see how few tracks can you use, and still communicate what the song needs to communicate? Again, it’s all about the song.

Idea number three: Place artificial constraints on your means of production. Computer recording is a double-edged sword. Its infinite possibilities can be overwhelming. Something that can work wonders is to pretend that you’re working on tape. Limit yourself to 16 or 24 tracks. This will force you to get honest fast about what’s essential to a recording and what’s not.

Idea number four: Place artificial constraints on how much time you have to spend on the record. If you have a fixed amount of time in which to work, you’ll be much more focused. Hiring a producer, by the way, is a great way to limit the amount of time you have, as most likely you don’t have infinite money.

Idea number five: Trust your gut, and work quickly. This is another big one. If you can habituate yourself to working quickly, and if you can be critical and continually edit and refine your work as you go, you’ll make good recordings. Period. And you’ll make a lot of them, improving and refining your skills with each successive one.

Idea number six: Be you. I see a phenomenon constantly with bedroom producers, in which they compare their work to records made by world-famous people with essentially unlimited resources, and the recordings they’re making don’t stand up. Well of course they don’t! Because it’s not a fair comparison. And that’s OK.

Just do the best you can. It’s seductive to dream about your painstakingly crafted bedroom recordings competing sonically with million-dollar major-label projects. That whole “If only I keep working on this just a little longer” thing. But, let’s be honest—that’s a long shot. So my advice would be for you to set yourself a more realistic goal of making the best recordings you can with the tools and skills you currently have—without setting up unrealistic points of comparison.

So to sum up: 1) Make the best recordings you can, that 2) honor your songs as best you can, and 3) do so as quickly as possible. Then get out there and sell some copies of what you’ve made, so that next time around you can make a better recording with the skills you developed while making the last batch. Onward and upward!