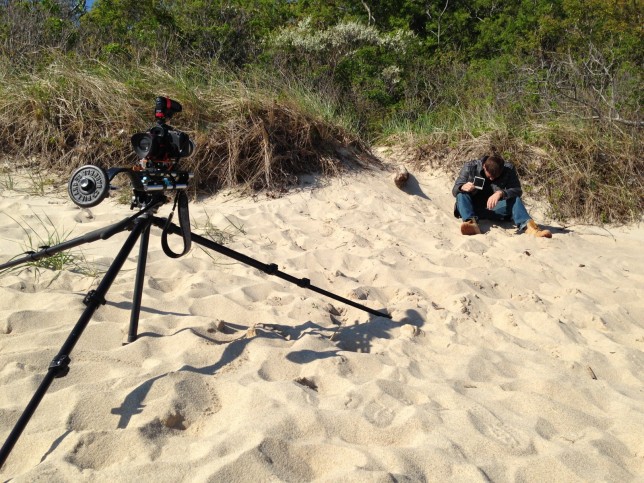 Jake Ramos is a New York-based filmmaker and the cofounder of Eternal Lion Studios, an independent film production company. He is the cowriter and director of Last Breath, a short film that is currently being crowdfunded on Seed&Spark.

My team and I are in the midst of post-production for our short film Last Breath. I am currently sitting here in my room, which also serves as our little editing studio, going through and analyzing each shot. This isn’t our first rodeo. We’ve done this many times before over the years. But this time, things were different. We definitely upped our game. You see, we come from a background of guerrilla filmmaking. We usually do things on the spot and run with it. But for this film, we spent more time planning, analyzing the screenplay, carefully preparing the shots, being personable with our talent, and learning and developing new skills along the way. That said, our experience wasn’t a breeze. There were some palpable road bumps along the way.

No matter how well you plan, things have a tendency to go wrong.

Depending on where you are mentally, a shooting day can be very high or very low stress. On one fateful day, ours was high—almost as soon as we began shooting, we went overtime at a church we used for a location. And that’s not all: Because we were overtime and it started to get dark, we needed additional lighting. But I had forgotten the lights. Driving back home to pick up the lights and driving back to the location took an additional hour out of our shooting time.

Once I returned and we finished setting up, I went over the scenes with our actors while the stunt team rehearsed in another room. We shot the initial scenes that involved heavy dialogue and then moved on to shoot the stunts and fight choreography. Again, everything was going fine until I looked at the time. It was almost 7pm in the evening and another group was scheduled to use the church for worship at 8pm. And we weren’t even halfway done shooting the fight choreography!

Everyone’s stress level was high knowing that time was now against us. The DP didn’t want to be rushed when setting up the shots. The actors and stunt team felt all their hard work rehearsing would be for nothing. And I was worried the congregation scheduled to use the place next would walk in on us at anytime. It was starting to be nothing short of a disaster.

At this point, I took a deep breath and thought about our past experiences. Having started as guerrilla filmmakers with little time to plan ahead, we did things on the spot, often solving problems quickly and creatively. Though Last Breath needed careful planning, I realized at that moment we needed to return our old style of filmmaking. I gathered the crew together and we came up with a different game plan: We would shoot run-and-gun with two cameras revolving around the action. Doing so would require less setup time for each shot/angle and the actors and stunt crew could continue their performance with less interruption.

So here I am now, in our little editing studio, looking through the footage from that day. Could it have been better? Yes. If we had more time, it would be better. But I’m proud of what we accomplished and how we weathered that particular production storm. It was a learning experience for all of us and one that we definitely will not forget.

No matter how well you plan, things have a tendency to go wrong. But learning from those hiccups can prevent them in the future. For example, my forgetting to bring an important piece of equipment was a huge blow to our production time. But that taught me to make a checklist and go over it before leaving for a shoot. In a larger sense, we learned that while our new adventures into better-planned, more serious filmmaking are great, we shouldn’t forget our humble beginnings. The skills we learned as guerrilla filmmakers were just as important in the clutch.

Photo from the set of Last Breath.