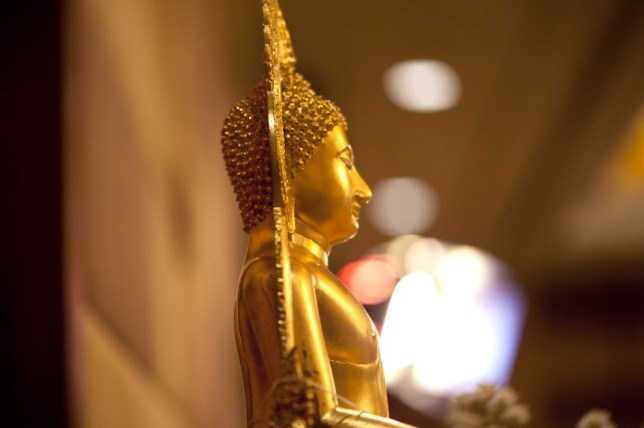 There’s some Confucius saying about being a stranger in a strange land, be careful be very careful because you don’t know the customs and you’ll wear out your welcome really fast.

Yeah, Confucius knows these things. I, of course, didn’t.

So I’m in Chiang Mai, Thailand at the moment trying to start an independent documentary company with a film partner. Documentary being what it is, well, we harbor no hopes of making tons of cash from that anytime soon. If ever. So whaddawegonnado for money?

Brilliant brainstorming brought us to the idea of shooting destination weddings. 5 Star hotels, pretty stuff to shoot, and damn good cash. But how?

And there are slews of specific ways of doing things in Buddhist ceremonies. Unfortunately we weren’t informed.

We rallied. Designed a website, made social media accounts, and even went so far as to print out a pretty flyer and bought heart shaped plastic paper clips to attach our new business cards. After this herculean effort, we hoofed it around town, knocking on wedding planners’ doors.

We found a planner who was interested in working with us—woooooot! But. To begin with we would have to create wedding content and that meant shooting weddings for free. Great! Sign us up! But uh how many freebies till we get paid? No answer.

The planner just told us to just show up at the various weddings she assigned—and do whatever we needed to do. That’s all she said. We spent a week studying wedding photos and videos, created lists of shots, etc.

Then we actually went to the weddings, which were entirely different than anything we’d looked at online. Because duh they were Thai, not American. Yes we’d looked at Thai stuff, but naively, in all the flurry we simply didn’t fully process the fact that these events were filled with a whole other kind of ideology.

Thailand has what every country has: religious customs. Every place has them. Thailand is primarily Buddhist, and there are slews of specific ways of doing things in Buddhist ceremonies, unspoken rules about these things. Unfortunately we weren’t informed.

So we show up at a beautiful Buddhist wedding ceremony. I’m wearing a sleeveless dress with a pair of orthopedic flip flops. Yes I said that. My mom suggested them okay? They are lifesaving. I have a bad back and since I had to shoot all day, wanted my feet and back to be functioning. In my eyes my ortho shoes are rad, kinda. 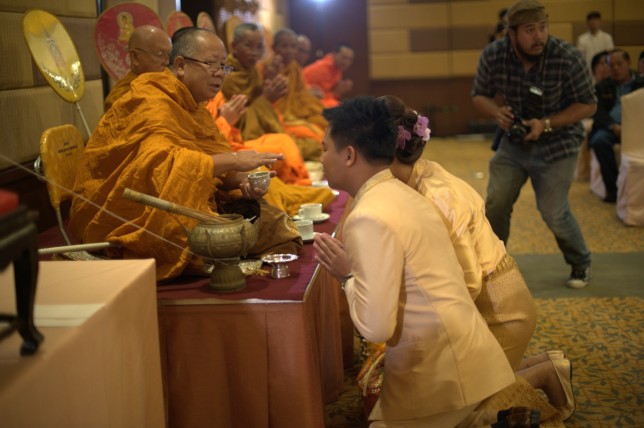 This was one of the throng of photographers. He was racing to climb onto the platform. I followed him. Photo by Vanessa Leigh. 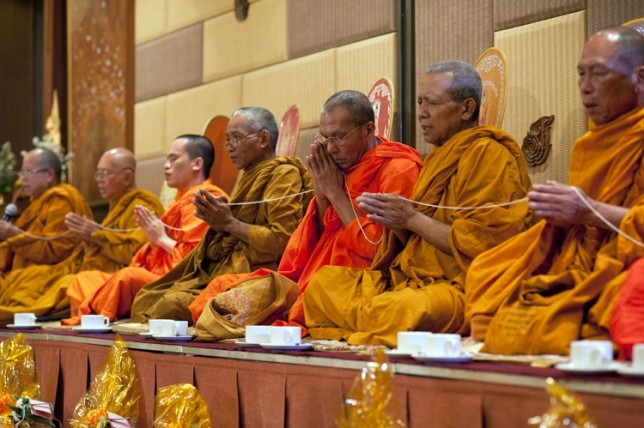 These were the chanting monks I offended at the wedding. Photo by Vanessa Leigh.

In the room there were twelve monks in a long row, doing various ceremonial things. There were also eight other photographers. I wondered when Brangelina was gonna show. I mean, eight! We were struggling to get a decent shot.

At some point everyone in the room dropped their heads, and suddenly the throng of photographers raced onto an elevated platform. The monks began chanting. Not having a clue what was going on, I jumped up on the platform with other photogs. Glanced over at my partner, and she was desperately shooting from the floor.

Right then the groom—poor dude, he’s never seen me before in his life and I’m there being an idiot without realizing it, at his wedding—broke out of this prayer state and glared at me. Have you seen the Maroon 5 video for “Sugar” where the band crashes weddings and the brides cry with glee? It wasn’t like that.

Ten minutes later, we got a text to leave and go back to the planner’s. Ohmigod we got fired.

We went to straight to the planner’s office. Okay no we didn’t. We went straight to a bar and ordered whiskey—fired from a free job? What do you do?

Then we realized that we were going to head into the planner’s office stinking of booze at one in the afternoon. Luckily I had gum cause you know that works.

So. The planner takes one look at me and I realized instantly the ortho-flops were wrong. The whisky buzz started muttering about my bad back and how Orthoheels is an amazing shoe company. She ignored me and informed us that not only was I inappropriately dressed, no shoulders no open shoes, but much more importantly under no circumstances do women go higher physically than a man.

You cannot be higher than the groom, ever.

Wha? But those other photographers were on that platform too.

Yes, but they are men.

But what about laying on the floor? Was that wrong too? No, it’s perfectly fine to be lower than a man, just not higher.

There was no Gloria Steinem argument from either of us. We just stared at each other in complete astonishment.

But redemption. She really liked our work. And even asked us to do some more freebies after that so the dream is still alive.

Lesson is yeah you right Confucius—this is not America.

Vanessa is a writer, documentary filmmaker, theater teacher and part-time digital nomad. At the moment she is based in Thailand, but that will change soon. She’s also lived in China, Ecuador, New Orleans, Brooklyn, San Francisco, Seattle and Pittsburgh. Her Kindle is filled with books about goddesses, Taoism and rock ‘n roll bios.

View all posts by Vanessa Leigh →