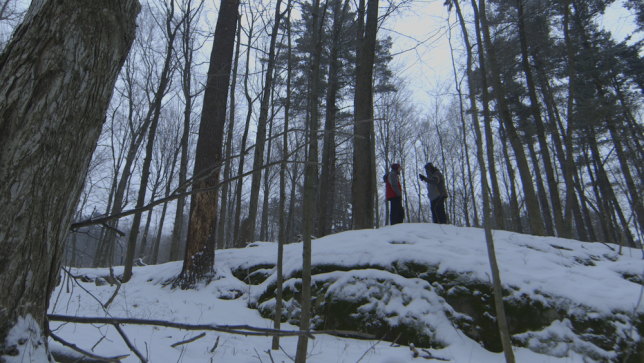 Christina Raia is an indie filmmaker in NYC who wrote, directed and produced her first feature, a horror film titled Summit. It was shot in below-zero weather in Massachusetts two Januarys ago on $20,000 with a skeleton crew in just two weeks.

Here, she shares five tips for making a film under similar conditions. Reposted with kind permission from Seed&Spark.

First, I should say that my number one tip is DON’T. Really, it’s not a good idea. Don’t do it. However, if you feel you absolutely must, as I did at the time, here are some things to think about.

Clean sound is, of course, imperative to every film, and we always have outside forces to contend with. It was a significant challenge on Summit. Snow is crunchy. Frozen snow is even crunchier. Winter attire is swishy. And, when people have to lift their legs and shuffle through snow, winter attire is swishier.

You may think growing up in a cold climate is enough to prepare you for working in -14 degrees for 14 hours straight. But guess what? You’re wrong.

Wind, well we all know about wind; think about how much you typically encounter during exterior shoots, now triple it. It whistles, it’s inconsistent from take to take and if you’re trying to make a film where the characters are completely secluded, know that it sometimes resembles the sound of a nearby highway. All of this wouldn’t be such a big deal, unless you’re trying to make a character and dialogue driven film, as I was, and don’t want to end up doing ADR for half of it.

I had made films before. I have made films since. I’m pretty good at budgeting for food, gas and the other usual necessities. But the estimates I made for Summit were way off.

Gas: If you’re doing multiple driving scenes on winding roads in the dead of winter, don’t just factor in the gas that goes toward moving your car. Consider the gas to heat the car between takes, or to heat the other holding cars where the crew will sit during rolling and the cast during setups. Also, if you have a DIY Process Trailer supporting the weight of 11 people going uphill against winds, know that you probably underestimated this part of the budget.

I spent much of the shoot worrying that my crew would walk away at any moment.

Warmth: You may warn people about the weather conditions and tell them to wear appropriate attire. You may stress it. You may nag them about it everyday leading up to production. Know that they may not listen. In fact, they probably won’t—my gaffer showed up in sneakers with ziploc bags over her socks. And even if they do listen? It won’t be enough because, if you’re like me and most of my team, you may think growing up in a cold climate is enough to prepare you for working in -14 degrees for 14 hours straight. But guess what? You’re wrong. You will dip into the budget to keep people warmer. Hand and toe warmers? Didn’t think about them before. We ended up buying dozens of them at a local Walmart everyday.

Don’t just know your crew’s technical ability and work ethic. Know them as people. Know the conditions they typically and have previously worked in, and where they have lived. Know what they expect out of a set. Know whether or not they’re the type of people that find working in extreme conditions adventurous or treacherous. People will sign on for work because they want work and/or experience, or have previously enjoyed working with you. That does not necessarily mean they’re really up for the challenges of this particular shoot. Make those challenges clear and understand their reasons for signing on.

I got lucky—the majority of my crew stuck it out and made the best out of an extraordinary situation. But I spent much of the shoot worrying that they’d walk away at any moment.

This advice works across the board for all first-time filmmakers, but especially when in extreme weather conditions and dealing with sunlight and snow. My Director of Photography was an adventurous guy who had shot in various conditions in multiple countries and was accustomed to working with whatever was thrown at him. But when I brought him in as my DP, my reasons for wanting to collaborate with him had nothing to do with that. I liked his vision for the project, his previous work, and his overall friendly but determined attitude. In hindsight, if he had not been who he was, with his experience in a variety of conditions, my film would not have been made. Period. And it definitely would not have been as cool. His daring made the film better—it was his idea to build a DIY process trailer and stand on it with a $16,000 camera in the pitch-black on icy roads!

Speaking of process trailers, if you’re driving it uphill, feel it start to slip, hear the tires struggle to move, and then smell burning rubber, it’s too late to reconsider and turn back. You’re stuck.

For the full experience of shooting Summit, read Christina’s blog. And watch the teaser trailer for Summit.