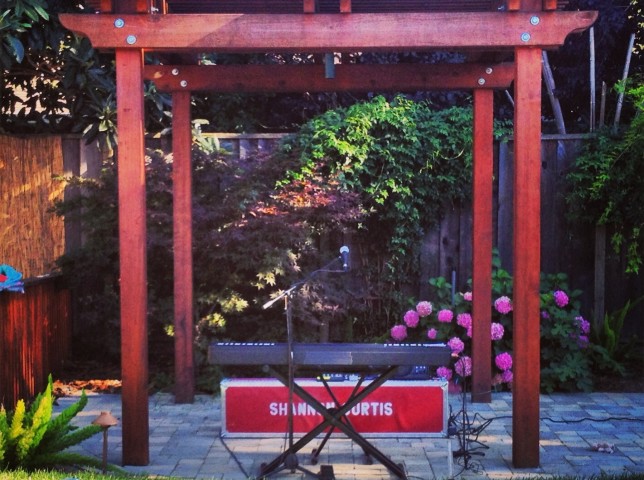 The next night. Photo by Shannon Curtis.

We pulled our car doors closed. Seatbelts clicked into place. The engine turned over and we skulked slowly out of the neighborhood.

In that moment on the highway, driving away from that terrible, awful show, I was discouraged.

The car eased up the freeway on-ramp. We joined the stream of tail lights in the nighttime traffic.

“Maybe I should get a job. This is clearly not working. I mean, I can’t have another night like that. It just won’t work if this is how it’s going to be.”

I wasn’t being melodramatic. It was that bad. There had been six people seated awkwardly in the dingy garage at the start of the show, but there were only four by the end since two had gotten up and left during the third song. It was my first summer house concert tour, and we were still evaluating if this was something that was actually going to fly. We knew it was a big roll of the dice, but after this night’s experience, I was convinced it had been a really bad bet.

Our host had been enthusiastic about the show in all our communication leading up to the event. I thought I had dotted all my “i”s and crossed all my “t”s in helping him prepare for a good night. And even when there ended up being just enough people there to count on one hand, I still played my heart out, as though I were playing for a packed house. It required me to fight back tears a few times because of the humiliation I felt, but I did what I had come to do.

I thought maybe there was something wrong with me. Maybe my songs just weren’t good enough. Maybe I was a terrible performer. Maybe this new model of house concert touring was just too unpredictable a thing to be successful. Maybe I’d held onto a hopeless dream for too long and I needed to be a responsible adult and get a job.

If only I could have seen into the future, to the end of the summer, to see what an enormous success the tour was going to be. If I’d been able to see even further, to the end of the following summer, I would have seen the tour grow to nationwide reach and our income become double what our projections had predicted. And even further into the future I would have seen myself writing a book about house concert touring and hearing from artists all over the world who started using the method and finding great satisfaction and success with it for themselves.

But in that moment on the highway, driving away from that terrible, awful show, I was discouraged. I’m sure you’ve had experiences like this. It’s an inevitable part of being an artist: when you put yourself out there with your work, you open yourself to criticism, rejection, and failure.

And as the music marketplace is becoming ever more a world of independent artists making their own ways, we’re required now not only to be artists, but entrepreneurs as well. And have you heard about the success rate of entrepreneurs in the business world? It’s a bloodbath! I’ve read that something like 80% of new businesses fail outright. But the entrepreneurs who end up being successful are the ones who learn from their failures, dust themselves off, and get right back into the game.

Really, all I might have needed was to see into the future only one night later. Then my faith would have been restored. The next night was wonderful—a show filled with warm people eager to have a unique music experience in their friend’s lovely home. This is one of the other lessons I learned: not every night is going to be a home run; but it’s my job to show up and do what I came to do, then move on to the next house and show up again.

So keep at it. The people who end up succeeding are the ones who don’t quit.