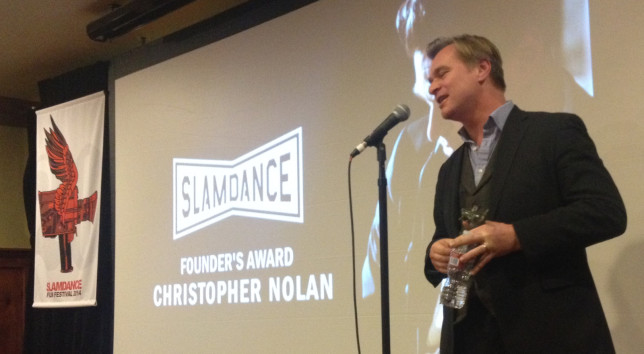 I’ve been to Salt Lake City more times than I can count. Growing up my parents visited longtime family friends, and now as an adult, trips to Park City in January are not only a fun part of being a film enthusiast, they’re an essential part of being a professional filmmaker.

My first visit to Sundance as a filmmaker came when Kevin Willmott’s film CSA: Confederate States of America premiered to quite a bit of buzz and acclaim. I worked on the crew for the film and Kevin and Matt Jacobson (Kevin’s frequent collaborator and my friend and mentor) invited me to stay in their condo in Park City. This trip was a whirlwind of movies, parties and people I would connect with for years to come. I saw the world premiere of movies like Primer and Napolean Dynamite, and watched Saw while sitting next to Danny Glover and Cary Elwes. And then, in between Sundance events, I’d make the trek up the hill to the Treasure Mountain Inn, and check out Sundance’s uber-indie little brother, the Slamdance Film Festival. They had barrels full of the energy drinks that were sponsoring them to mix with the alcohol that they may or may not have provided between screenings of films that were un-apologetically indie.

Sundance is wonderful and huge, but sometimes films and filmmakers can get lost in the shuffle.

Every subsequent year I returned to Park City—including the year that I shot a film that premiered at Sundance—I found myself spending more and more time at the Treasure Mountain Inn. I would regularly buy a pass to Slamdance, and if I had a couple hours (or days) between Sundance movies, I’d sit in and watch one film after another in those tiny, cramped screening rooms.

Then, in 2014, out of over 5,000 submissions, a film I helped produce was officially accepted into competition at Slamdance. The Sublime and Beautiful was the debut film from first time director, long time actor and friend, Blake Robbins.

The Sublime and Beautiful from Through A Glass Productions on Vimeo.

We traveled to Park City with the movie and experienced the festival in a whole new way. Sundance is wonderful and huge, but sometimes films and filmmakers can get lost in the shuffle. Slamdance is like one big family. All films screen in the same building, and you meet and see the same filmmakers over and over again. You build friendships that last the week of and continue after the festival’s end.

This year, my wife and I directed a short film called, COURTESAN that premiered at the 2015 Slamdance Film Festival as part of the Digital Bolex Fearless Filmmaking Showcase.

Returning to Park City, we ran into a lot of the same friends we’d met the year before, and once again as filmmakers, the festival welcomed us with wide open arms. Just as it has for the huge list of filmmakers discovered at the festival, including: Christopher Nolan (Interstellar, The Dark Knight Trilogy), Oren Peli (who debuted Paranormal Activity at the festival), Marc Forester (Quantum of Solace, Stranger than Fiction), and Anthony and Joe Russo (Captain America: The Winter Soldier), and the alumni who were first discovered, they are proud of their Slamdance roots and often come back to support the next wave of up-and-coming filmmakers.

As a part of their support, Slamdance brings in a wide array of speakers to talk to small groups of filmmakers. Oscar-winning cinematographer Vilmos Zsigmond gave a talk, and then when everyone left, he stayed and had coffee with me one on one. Christopher Nolan came to talk with a small room of filmmakers and introduced me to his whole family. These things don’t happen this regularly at other festivals, but for whatever reason, they do at Slamdance, and I’m thankful for it.

I look forward to continuing my treks to Park City, and now as a two-time Slamdance alumnus, I hope that I can do my part to help the festival continue to grow and support filmmakers for years to come.